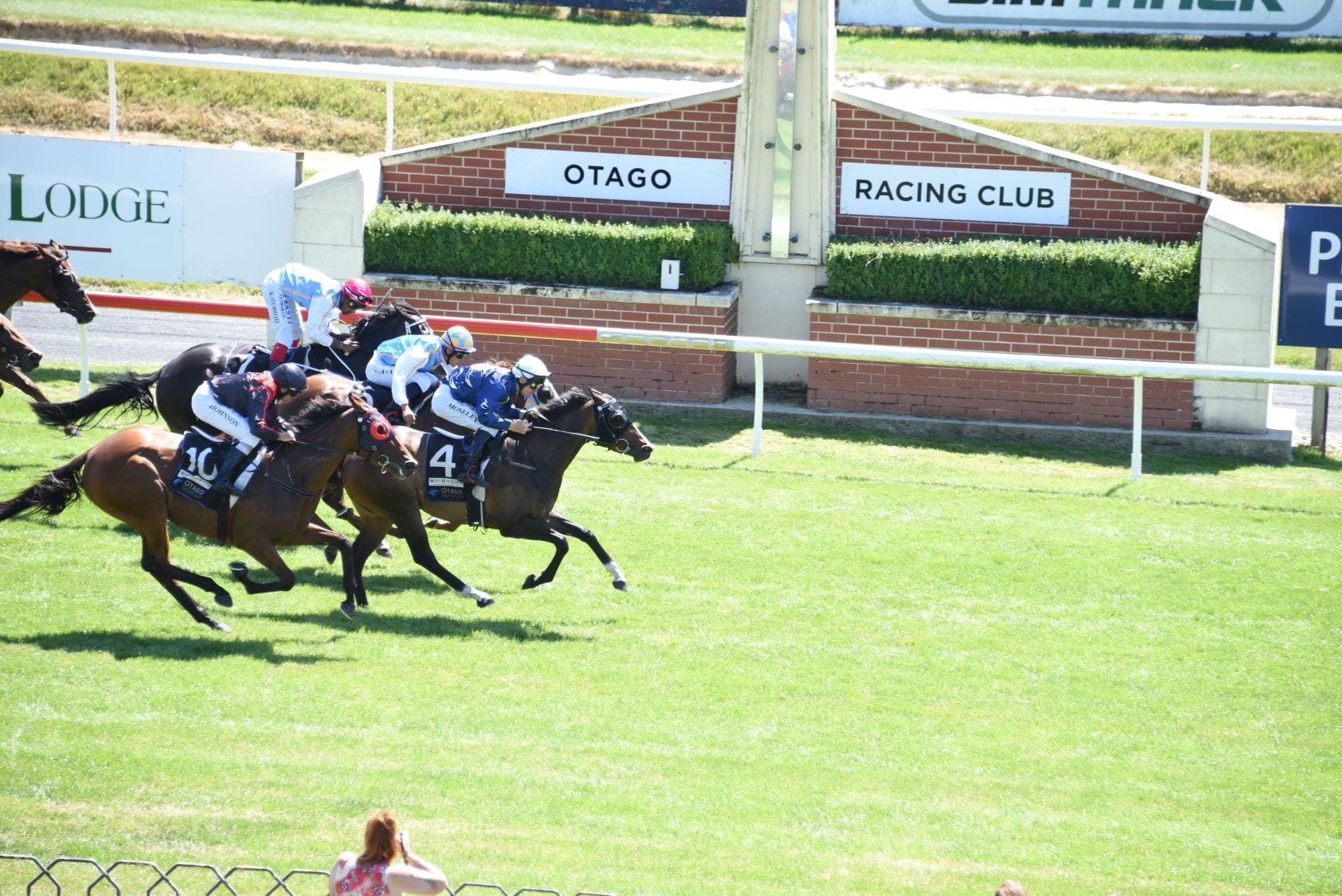 A rematch of last month’s Listed Gore Guineas (1335m) produced the exact same result on Saturday as Showemhowitsdone edged out The Gift in a tight finish to the Listed Mediaworks Dunedin Guineas (1500m) at Wingatui.

The same two fillies hit the line locked together two weeks ago at Gore, where the strong-finishing Showemhowitsdone snatched victory by a head. But a rough-house finish and Slow8 track conditions may have raised some doubts over that form when a similar field stepped out on to a Dead4 track at a sun-drenched Wingatui.

Those doubts were emphatically dispelled as Showemhowitsdone and The Gift went to war again. The Gift quickened from a handy position to challenge for the lead with 200m to run, but Terry Moseley unleashed Showemhowitsdone down the outside and she soon swept up alongside her rival.

The Gift fought back bravely again, but she had to settle for another second placing as Showemhowitsdone lunged at the line and prevailed by a neck. Gone With The Wind produced an eye-catching late run from last for a close third.

Trained by Shane Kennedy and Anna Furlong for owners Dennis and Sally Mullally, Showemhowitsdone has now won three of her 12 starts and earned more than $78,000 in stakes. “It was another great win today and we were really rapt to see her back up what she did at Gore,” Anna Furlong said. “She’s proven that she’s pretty versatile, she’s a real professional and she can just skip over any type of ground.”

Showemhowitsdone picked up a Listed Welcome Stakes (1000m) placing among four starts as a two-year-old last season, then collected the first win of her career in September at Ashburton. Her four subsequent spring starts included a sixth in the Group 3 War Decree Stakes (1600m) and a third placing during the New Zealand Cup carnival at Riccarton.

But the Showcasing filly has made giant strides since then, winning a trial at Ashburton in January before her back-to-back Guineas successes. “I think she’s definitely gone to a new level in this preparation,” Furlong said. “She’s matured and grown a little bit, which she probably needed to do. Her head seems to be really in the game at the moment, and nothing fazes her at all. She just takes everything in her stride.”

Rather than attempt a clean sweep of the southern Guineas races in the Listed Southland Guineas (1600m) at Ascot Park later this month, Showemhowitsdone is likely to be saved for a clash against her own sex.
“Instead of going to the Southland Guineas, I think we’ll probably save her for a three-year-old fillies’ race over 1400m here at Wingatui in a month’s time,” Furlong said.

That race is the Listed NZB Insurance Stakes (1400m) on March 6, which is the second leg of the New Zealand Bloodstock Southern Filly of the Year Series. The first leg was the Listed Canterbury Belle Stakes (1200m) in the spring, won by the now Sydney-based Matchmaker.