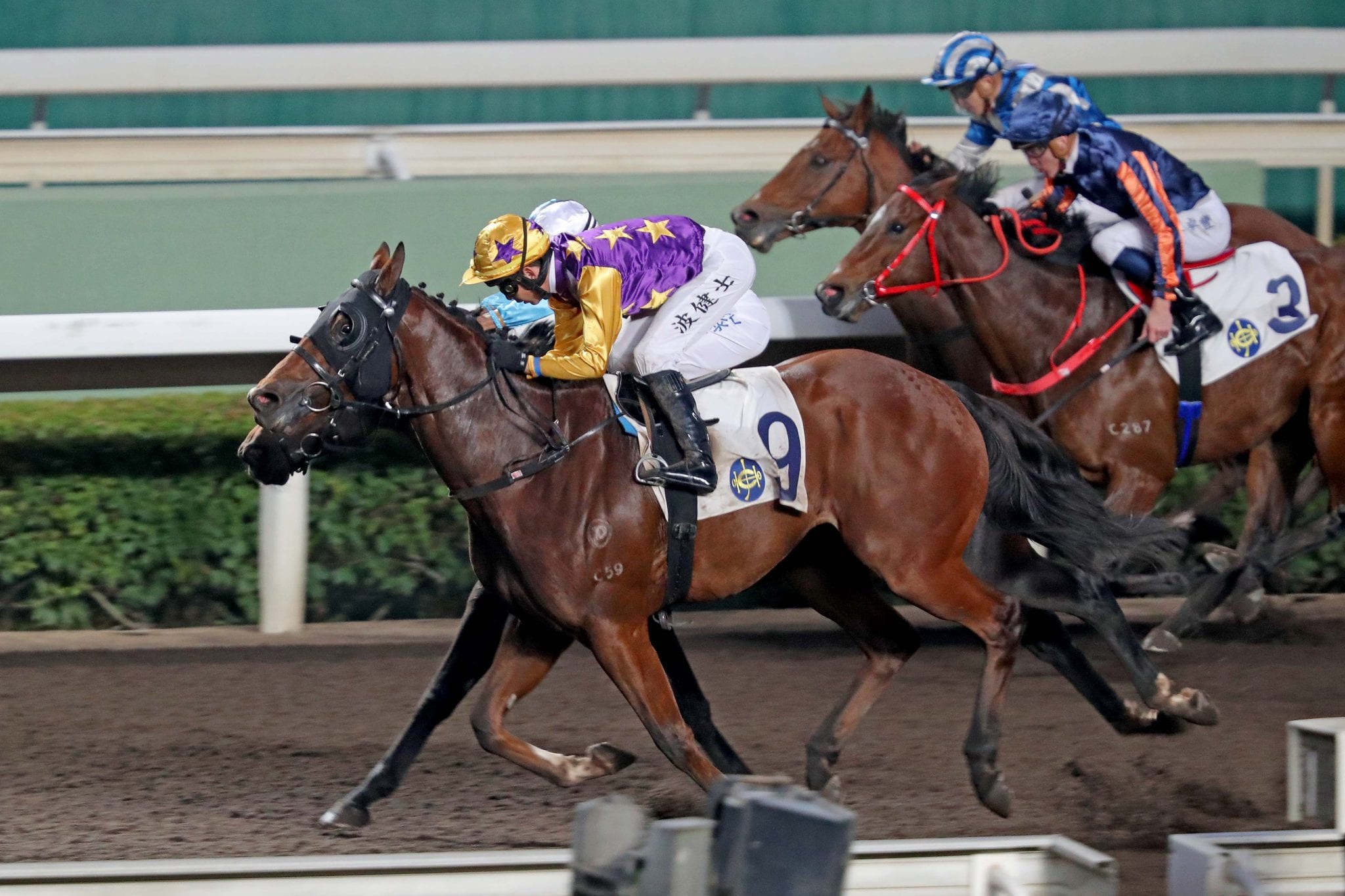 Amazing Chocolate (119lb) scored a win full of merit in the Class 2 Ashley Handicap (1200m) at Sha Tin yesterday (Sunday, 6 December) which had trainer Tony Millard buoyant that he has yet another bourgeoning star on the dirt within his stable.

“With these dirt type of horses anything can happen, you can suddenly end up with a super horse and he’s got the body and the physique to be a good dirt horse,” Millard said.

Millard knows a good dirt horse, he trained Super Jockey to a 2016 KOR Group 1 Korea Sprint (sand, 1200m) win as well as narrow second in the Group 1 Dubai Golden Shaheen (dirt, 1200m) prior to that and today’s win had the South African drawing comparisons.

The Sepoy gelding, having only his second start on the dirt, was caught wide under Vagner Borges but managed to dig deep for a narrow win ahead of Will Power (132lb), a five-time winner on the surface and star on the dirt in his own right.

“You always have to be hoping but if he can give us another good run like this then we might have something special but he needs to do it again,” Millard said.

The six-year-old joined Millard’s stable at the tail-end of last season, and since then has three wins on the turf and one on the dirt.

“I always thought that he would run on the dirt, he has a dirt pedigree and I had a long conversation with the owner and so we decided to give him a run here and take a chance,” Millard said.

The gelding’s sire Sepoy is a son of Elusive Quality, the father of 2004 Kentucky Derby (dirt, 2000m) winner Smarty Jones.

“I’m very happy with him, he’s progressed and now we’ve seen a different side to him and hopefully he can progress, if he can pick up another one like this it will be very nice,” Millard said.

Currently an 82-rater, yesterday’s win could surge him close to triple figures, after also beating another smart performer on the surface, Red Desert (130lb), while Lobo’s Legend (121lb) grabbed fourth.

“Because if he’d done well we could have planned to maybe go to Korea but he did need to win one on the dirt in order to give us that type of confidence,” Millard said.

Within his stable at present, Millard also has Elusive State, a five-time winner on the dirt who campaigned to Dubai in March, only to return without a run due to the carnival’s cancellation.

“He needs to win another one like this and then if he wins that and we’re happy with him then we can have a really good horse, these type of horses they grow another leg and they can handle it – wow – then they’re immediately elevated to group stages,” Millard said.

Chan’s off the mark, Callan at the double

“It took a bit longer than I’d hoped – I had a few seconds early on and I just needed a little bit of luck,” Chan said. “I’m very glad to get my first win, especially for my boss as well.”

Chan settled the Animal Kingdom gelding second in the run before peeling out to hit the front at the 300m mark, and shortly after doing so, was headed by Happy Tango, who he managed to overhaul in the final 50m.

Chan had notched five runner-up efforts from 63 rides prior to today’s breakthrough success for the 2020/21 racing season, taking his overall tally to 32 Hong Kong wins.

“I will keep working hard and hopefully things will change a bit for me from now on,” Chan said.

The Irishman then sealed a double and his 10th win since the start of November, again teaming with Yiu as Excellent Chariot went back-to-back in the Class 4 Hankow Handicap (1200m), denying the late challenge from Soaring Tower.

The Jimmy Choux gelding takes his record to an unbeaten two wins this season following three consecutive fifth-placed efforts last term, and as a 57-rater at present, is sure to now find himself skipping up to the bottom of Class 3.

Ping Hai Bravo does it again

Ping Hai Bravo scored his second win in succession in the Class 3 Cameron Handicap (1000m), and once again upstaged boom youngster Joyful Fortune, who faded to a weakening 11th as the -166.67 race favourite.

The John Size-trained four-year-old again scored under Frenchman Alexis Badel, and did so with his trademark late surge to land his fourth win at just his 12th start.

“He’s a nice horse, he’s such a big boy but he’s got a great action – he jumped well from the gate so I didn’t give too much ground after the break.

I just gave him a chance by moving to the middle of the straight and when he gets rolling he’s got a big stride and he’s definitely got potential this horse,” Badel said.

A colossus in the gates, the Red Dazzler gelding weighs in at 1297lb, and was the largest to tip the scales in today’s field by at least 60 pounds.

“He’s very strong and he proved once again that he is a great horse,” said Badel, who took his seasonal tally to 19 wins.

The Kyllachy six-year-old was onto his third trainer but scored for Yip at only his second start for the handler. The British-bred bay was a three-time winner on the Polytrack prior to export, winning at Kempton Park and Lingfield.

“He dropped down the handicap and he always fared well on the all-weather and today we found a good spot and found a clear run quite easy,” Leung said.

Karis Teetan snatched his 25th win this season with a smart all-the-way win aboard My Sugar in the Class 4 Middle Handicap (1400m).

“Thanks to Jimmy and his owners for giving me the opportunity – he’s a lovely horse and he’s been running well this season,” Teetan said.

Tony Piccone kept on rolling with his second win this season, again for trainer Chris So, as Turf Brilliant plowed through the dirt to win the Class 5 Salisbury Handicap (1650m).