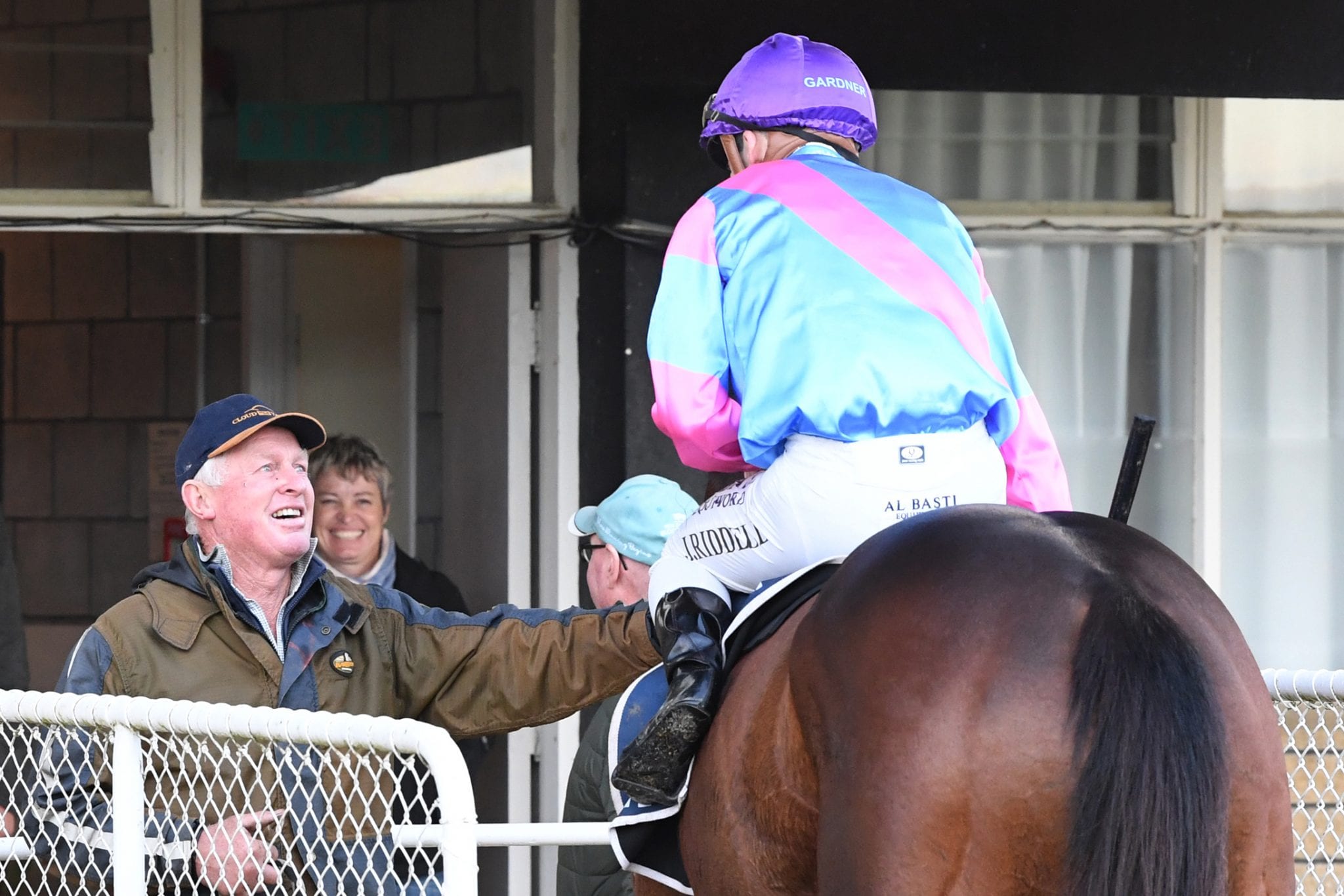 Gisborne trainer Mick Gardner was quick to divert the credit for his first success at Woodville on Thursday to prominent Hastings horsemen Paul Nelson. Gardner (65), who has the distinction of being the only trainer on the Makaraka racecourse, prepared Nedwin to rock punters to the tune of $59.70 when racing away to a two and three- quarter-length win over 1600m in the hands of Jonathan Riddell.

Nedwin was having his seventh start with his best result being a fifth of eight at Wairoa last February before Gardner obtained his owner-trainer’s license and took over his training of the Niagara six-year-old gelding. Nedwin beat just two horses home first-up over 1600m for Gardner then was a battling seventh over 2100m at Hastings before dropping out to last over 2200m at Awapuni last month. And that’s when Nelson, Gardner’s long-time family friend, offered his valuable advice that worked the oracle.

“Paul has been my chief instructor and he told me I had been over-training him and to cut back on his work,” Gardner said. “I did that and slapped a pair of blinkers on him and it worked.” Gardner has been the honorary course manager of the Makaraka course for the past five years and trains Nedwin either on the track or at the beach.

“I’ve got the track to myself and I have been maintaining it,” Gardner said. “The (Poverty Bay Turf) Club leases it from LeaderBrand and I keep it grazed in the winter with hoggets. With the grapes growing in the middle, it’s being used, but sadly not for racing. It’s a good track.”

It’s a far cry from the days when Gisborne was the source of so many top horses and skilled horse people and race meetings on the course were a highly popular event, both for locals and visitors. Gardner has spent his life in Poverty Bay, mixing the equestrian field with farming in the hill country for 30-odd years until moving into a 10-acre block of land adjacent to the Makaraka racecourse, which makes it easy access to work Nedwin, whom he races in partnership with his wife, Suzie. “I had a couple of rides as an amateur rider over 40 years ago, but didn’t do any good,” he said. “I remember one of them was for Evan Rayner.”

Gardner began training Nedwin on the advice of another highly talented horseman, Simon Wilson, who celebrated his biggest training success last year with Dez in the Group 3 Winter Cup (1600m) at Riccarton. “I had him at the Gisborne show and Simon had a look at him and said I should race him,” Gardner said. “I’ve been into show jumping most of my life and I’ve ridden up to World Cup level. “I’ve known Simon and a lot of the others for many years. Maurice Beatson took one of my horses, Jefferson Junior, to the 1988 Seoul Olympics. “It’s a great community, the jumping scene, and over the years I’ve got to know a lot of people in racing, too. I’ve got no shortage of people to call on for advice.”

Gardner’s late father-in-law was Graeme Hansen, a Poverty Bay stalwart who was an international showjumping representative and judge at many prestigious international showjumping events. He was also a member of New Zealand’s first Olympic showjumping team, competing at the 1964 Tokyo Olympics, and was inducted into the 2013 Tairawhiti Legends of Sport Hall of Fame, then in March this year the entire 1964 Olympic equestrian team of four riders was inducted into the Equestrian Sports New Zealand Hall of Fame.

Hansen was extremely passionate about racing and, as well as serving on the committee of the Poverty Bay Turf Club for many years, he enjoyed success as a racehorse owner with his best horse being Whitole, whose nine wins included the Group 3 Hawke’s Bay Cup (2200m) and the Group 3 Manawatu Cup (2200m), both in 1985.

“I was the first to gallop Whitole and I remember saying, “Geez, he’s a rough horse,” Gardner said. “Tells you what a judge I was then.” Gardner knows Nedwin will never match the deeds of Whitole, but he hopes there are more wins in store.

“I bought him as a jumper,” he said. “I took him to the Waverley point-to-point and Aaron Kuru rode him for me and said he could be all right so that gave me a bit of confidence. “I don’t know where I’ll take him next. Paul just said not to be in a hurry so I’ll take his advice again.”