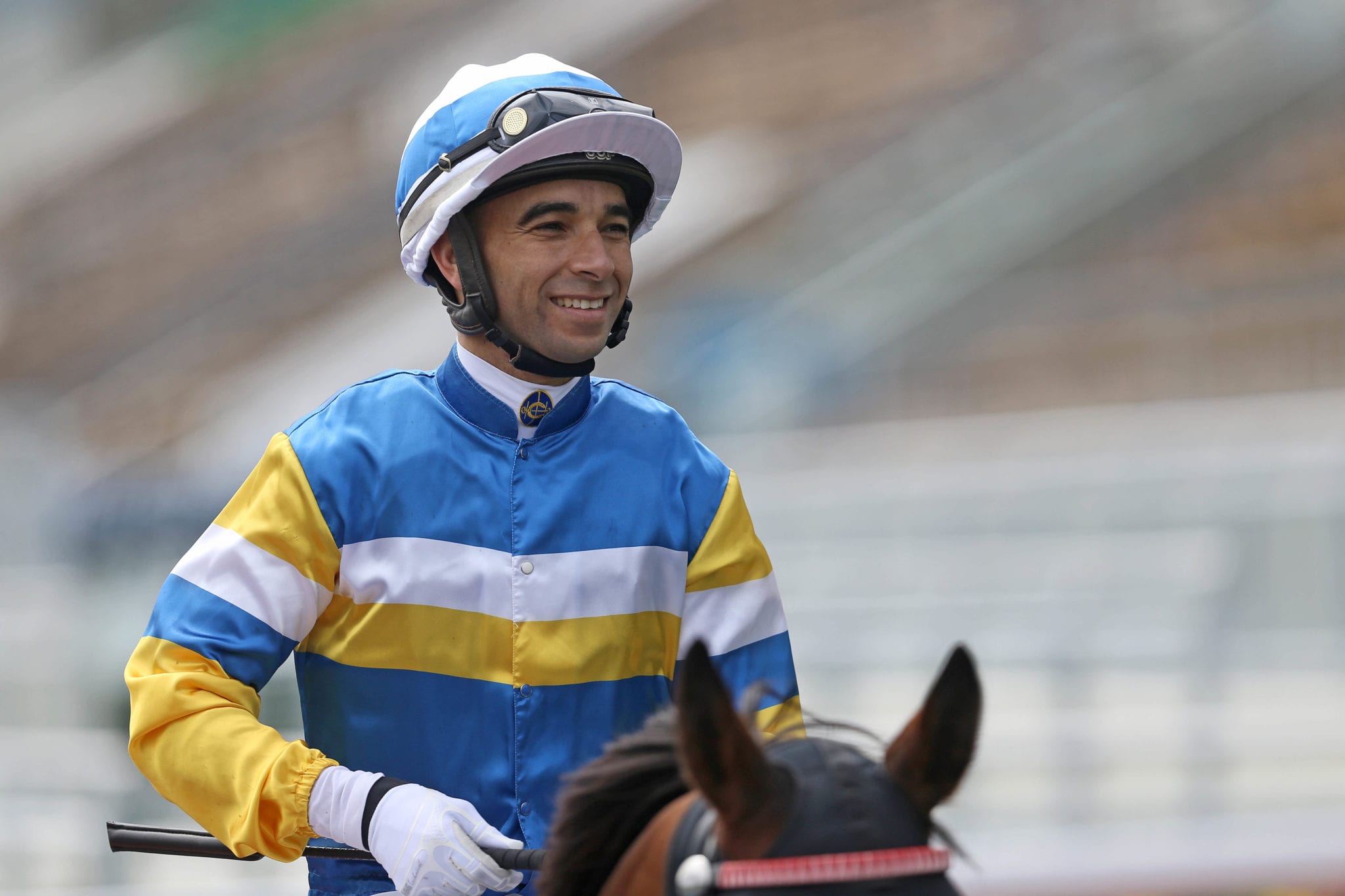 Joao Moreira knows he needs a big response at Sha Tin today (Saturday 9 May) after title rival Zac Purton burst four wins clear at the top of the premiership with a fantastic five-timer at Happy Valley midweek.

The Brazilian endured a blank night as Purton put on one of those dazzling multi-win hauls that both brilliant riders have proven so adept at producing in recent seasons.

With Purton reduced to seven rides on the weekend’s 10-race card, Moreira is hoping his full book contains enough quality to at least reduce the deficit as both men continue their on-track grapple to beat the other to a fourth Hong Kong champion jockey title.

“It’s not over yet,” Moreira said after riding barrier trials on Friday (8 May) morning. “I’ve got some support and some nice rides coming up.

“There’s no doubt that what Zac did on Wednesday was fantastic. He has proven he’s a world class jockey and nobody should be surprised that he’s in front at the moment, he’s put himself in a much more comfortable situation getting a few winners ahead of me.

“But I don’t think people should doubt me because I have faith in myself,” he continued. “I know I’ve got it too, I’ve got the skills and abilities and I know what I’m doing. I’m very strong mentally and I’ll be doing my best all the way to the end.”

Moreira has set the pace for most of the campaign, with Purton leading the way for three short spells so far. The former expects the tussle to remain tight right to the final race meeting at Happy Valley on 15 July.

“A little while ago I was 11 in front, then I was behind and then I went three or four ahead of Zac again; now I’m behind but who knows what’s going to happen even in the next thirty days?” he said.

Moreira is enjoying the rivalry, believing the competition pushes both competitors to higher performance levels. And, while he appreciates the excitement it brings to the sport, he is also keen to maintain a sporting approach and avoid the development of any false narrative about the rivalry having a bitter edge.

“The public is loving it,” he said. “But Zac and I are rivals only on the track. When we are off the track we are not enemies, we treat each other very well and I think we shouldn’t change that because if we do it will make things awkward for both of us and create an unhealthy environment.

“So far, we’ve been able to keep the sporting rivalry the way that it should be and if I’m the winner, or he’s the winner at the end of the season, either of us would have done enough to deserve it.”

The four-year-old, named Hawkshot when trained in Australia pre-import, impressed with a Hong Kong debut win in January but then raced too keenly and lost all chance in his next three outings. Last time, he travelled more kindly to place second at the course and distance behind the re-opposing Ballistic King (119lb).

“It feels like he’s responding to what he’s been taught,” Moreira said. “No doubt the race he ran last time suited him because they went a bit faster than the races he ran before; the step back in distance and the pace both helped him to settle down in the race much better, which was our aim with him.

“He seems very healthy and he’s going forward. If he performs like he did first time out it wouldn’t be a surprise because we have a lot of faith in him at home, we think he’s a good horse – I wouldn’t put him out of the frame quite yet.”

The race also features the smart Frankie Lor-trained four-year-old Decrypt (126lb), the mount of Purton, while new apprentice Jerry Chau will get his first taste of Class 1 action on his first race day in Hong Kong aboard the John Moore-trained Buddies (120lb).

Moreira has a 23% win strike rate at Sha Tin this term, against Purton’s 20% at the big track; Moreira rides at a 22% strike rate on the turf circuit and at close to 24% on the dirt, while Purton’s figures are 21% on turf and a shade better than 12% on dirt.

Moreira’s strike rate for Size at Sha Tin this term is healthy – 21% overall – but even with 19 meetings remaining, his 21 wins at the course for the handler is noticeably down on the past three seasons when the duo tallied 46 (20%), 41 (28%) and 39 (25%) successes there. That is a consequence of the 11-time champion trainer going through a season of transition, which has yielded only 36 wins to date.

The rider is satisfied that trainers and owners have backed him and will continue to trust in his proven ability but he also believes he has sensed a recent shift towards Purton.

“I can’t complain about the support that I’ve got but if I go deep into it, I think there’s a bigger number of trainers migrating to Zac’s boat – I think he’s getting enough support and where he is at the moment proves it,” he said.

He also believes the Size alliance could yet prove influential if the handler’s young stock can emerge ready to win in the final weeks of the season.

“I do think that, especially when he’s starting to send out some of his younger horses and I hope that gives me a boost,” he said.

“I need it very much, but, at the same time, I can’t just rely on him because let’s say his young horses don’t do very well, then it’s over for me. So I’m also working with other trainers, I feel like I can get other rides outside and I hope that’s just enough to help me out in the premiership.”

Size has eight named PPGs (Privately Purchased Griffins) currently in work that are either unraced or have raced only once and have already stepped out in barrier trials, and could therefore be set to compete before the season ends. Moreira had nine wins last term aboard first-season Size-trained PPGs in Class 4 – this term he has three wins and is hoping to improve that record aboard the three-year-old debutant Iluvataar in section one of the Class 4 Peridot Handicap (1200m).

“He’s impressed me in his trials and if he’s able to produce in the race what he’s been showing us, in regard to ability, I’m quite confident he’ll go out there and be competitive first time. I can’t say he’s going to win because it’s always difficult to win first up, it’s tough in Hong Kong, but he’s a quality horse,” Moreira said.

He will also partner the Size-trained Hong Kong Win in a hot edition of the Class 2 Amethyst Handicap (1000m). The four-year-old was withdrawn from an intended engagement on 8 April due to lameness.

“He’s going good,” he said. “Whatever problem he had, he definitely overcame it because he felt great in the trial – I don’t see that as an issue. His chance is good – the race is going to be hot and that will give him a chance to come from behind and run them down.”

The fourth of Moreira’s Size-trained mounts is Ping Hai Treasure on the dirt in the Class 3 Jasper Handicap (1650m).

Moreira will also team with trainers Caspar Fownes and Francis Lui, as well as Danny Shum for whom he will partner the hat-trick seeking Fantasy, and he will also climb aboard the Douglas Whyte-trained Farhh Above for the second time, in the Class 3 Emerald Handicap (1400m).

“Farhh Above felt like a good horse – he’s in the making still. He’s probably far off being at his very top in regards to maturity and ability because he seems like he has the potential to go farther than he’s gone so far,” he said.

“It seems like an even race – there are multiple horses with a good chance in the race and there’s no doubt he’s one of them.”