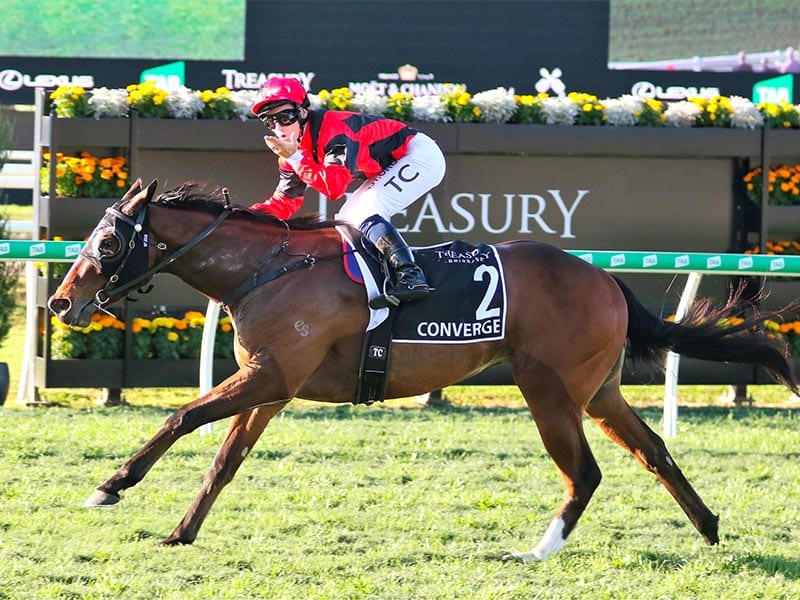 The Group 1 J.J. Atkins (1600m) was taken out by “honest” gelding Converge for Gai Waterhouse & Adrian Bott on Saturday at Eagle Farm in Brisbane, Australia.

The two-year-old son of Frankel started as a firm $2.50 favourite with most online bookmakers and did not let the punters down, storming clear to win by three-and-a-quarter lengths over Giannis and Tiger Of Malay.

Converge had caught the market’s attention with an eye-catching performance in the BRC Sires’ Produce Stakes a fortnight earlier when second to Tiger Of Malay over 1400m.

Jumping from barrier five in the J.J. Atkins, Tim Clark had his mount well within striking distance at the top of the straight and quickly moved up to put paid to his rivals.

“It was fantastic to see,” Bott said.

“Obviously you come here hoping for a performance like that.

“We saw such a great run from him in the Sires and thought it was a matter of holding him together, keeping hm up to the mark just for one more run.

“Obviously getting that draw today was key and we were able to get all the favours in the run.”

Now a winner of three from seven, Converge has also placed at Group 1, Group 2 and Group 3 level, amassing just shy of $1,000,000 in prizemoney.

“He’s showing great improvement every time he steps out, but he’s putting it all together now,” Bott said.

“He’s just such a genuine horse.

“He’s the most honest horse that we’ve got and now he’s got an explosive turn of foot to go with it, so it’s dangerous.”

In recent years, the likes of The Autumn Sun and Press Statement have taken out what has become a real stallion-making race, and while the son of UK superstar Frankel would be worth plenty, Converge was gelded very early on.

“That’s the approach we took; we made that decision early and I think it’s honestly been the making of him,” Bott said.

“We’ve got a really genuine horse; the owners first and foremost love their racing, they’ve been fantastic supporters of mine.

“They are the real reason that I’ve been given these opportunities and am able to stand here today alongside Gai in partnership.

“They’ve certainly made it all happen, so I’m glad to be able to reward them with a Group 1 victory.”

While no plans have been set in stone for Converge’s spring campaign, Bott believes they have plenty of open doors in a bid to chase more Group 1 success.

“We can go home and dream of tonight what could be possible for his three-year-old career,” he said.

“I think the way we’ve seen him today, the way he settles in his races, he’s certainly got the scope to improve over further, so that certainly opens up a lot more options for him going forward, and if he continues to develop physically and improving every time he steps out like today, we’ve certainly got a lot ahead.”

Converge has firmed from $15 into $6 second-favourite for the Golden Rose on September 25th and is a $21 chance in the Cox Plate.