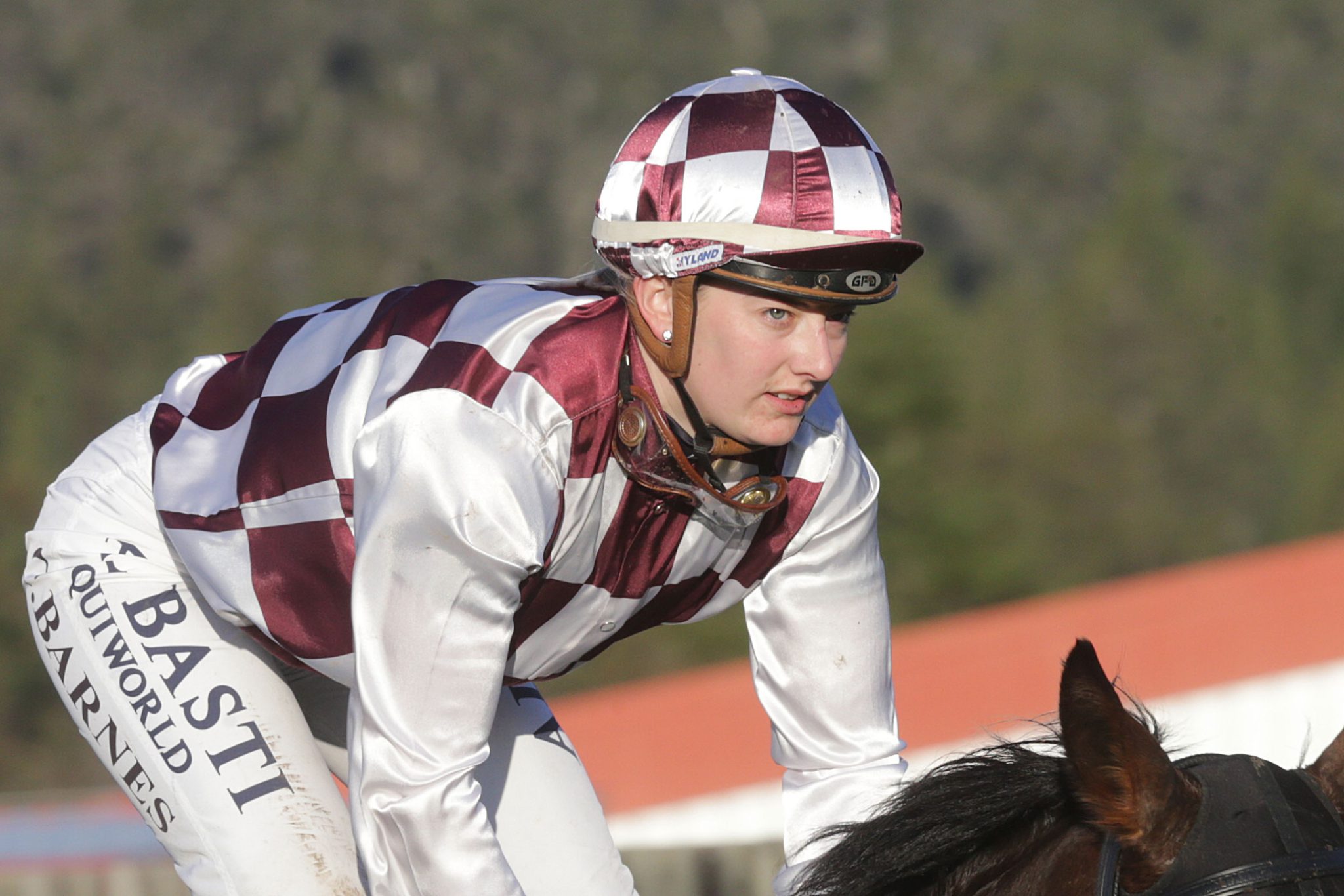 Getting to 200 career victories wasn’t a big thing for New Zealand jockey Courtney Barnes at the beginning of the season, but it’s definitely been on her mind in the past few weeks.

The 27-year-old brought up her 199th victory aboard Red Rufus at Riccarton on June 25, but went winless at Rotorua, Cambridge, Riccarton, and Ruakaka in the past week as she sought the elusive 200.

However, she went to Wingatui on Sunday hopeful she could reach the milestone, and it finally arrived via Kitty Power in the seventh race of the day, a Rating 74 1600m event.

“I’d had a bit of a tough day,” Barnes said. “I thought I had a good chance in the first race with Far Lun, but he ran third so it wasn’t to be in that race,” she said.

“But I knew Kitty Power would be a good chance, so when I was able to get her home I was stoked. It was really good to get to the line.”

Barnes produced a clinical ride aboard Kitty Power, settling the Kelvin and Aimee Tyler-trained Dalghar mare one out and one back from the pace. She brought Kitty Power to the centre of the track on the home turn and the pair raced away for a 2.25 length victory.

“She’s a horse that’s always thereabouts. I think I had a third on her two starts back, and I thought she would definitely run in the money,” Barnes said.

“That was the best she’s ever travelled when I’ve ridden her.”

Barnes didn’t waste time bringing up win number 201, scoring on the +1300 shot Jessie’s Rock in the very next race, a Rating 65 1600m contest. She brought the Terry Kennedy trainee from midfield and raced away for a two-length victory.

“It was my first ride on him, but he’d been racing well on better ground and the word was that he’d be much better on heavier footing,” she said.

“He travelled really nicely and took me into the race at the right time and he saw the mile out really well.”

She said both horses might well have targets at the Grand National carnival at Riccarton next month. She thought both would handle 2000m if asked.

Barnes began her career in the South Island as an apprentice for the Anderton Family of White Robe Lodge. She was based in the south for most of her career before making a move to Cambridge last year.

“It’s definitely been a challenge moving up north, but I’ve enjoyed it,” Barnes said.

“It’s harder to get good rides, it’s more competitive, but I’m happy to be here. Stephen Marsh in particular has been a really good help.”

Despite the move north, Barnes has been a regular visitor to South Island race meetings to keep getting rides.

“It hasn’t been a problem, and I’ve been able to pick up a number of rides down south,” Barnes said. “I have a lot of good connections in the south and it’s great to come and ride for them.”

Marsh provided two winners for Barnes on the Cambridge synthetic track on June 15 in Fiscal Fun and Danelion, and she hopes to reunite with them back at Cambridge on July 13.
Before then, however, she’s taking a well-earned break.

“I’m heading to the Gold Coast in Australia on Tuesday for a week’s break, which will be really good,” she said.

“After that, I’m looking forward to returning to work and getting more rides.”

Barnes has ridden 19 winners in the 2021-22 season. She said she didn’t have any particular goals for the new season, other than to keep working hard and riding well, though if she could beat her previous best season for winners – 33 in 2013-14 – it would be a great bonus.

“I just want to build on this season, work as hard as I can, and get as many rides as I can,” she said.
“It would be great if I could maybe top my best season, but ultimately I just want to ride as many winners as I can.”