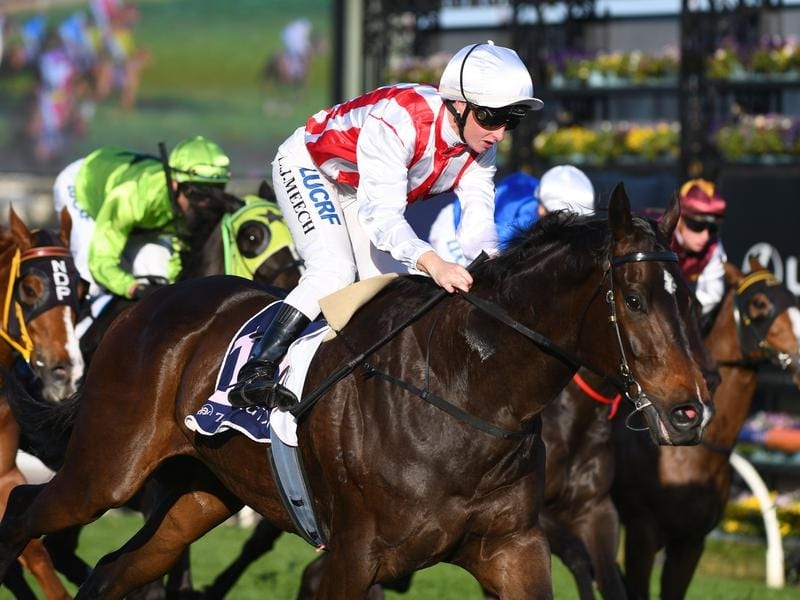 After a disappointing end to his previous preparation, promising gelding Zoutori has made an impressive start to his spring campaign at Flemington.

Zoutori resumed in Saturday’s Group Two Bobbie Lewis Quality (1200m) and powered home under jockey Linda Meech near the outside fence in the straight-track sprint to land his first stakes victory.

It was the four-year-old gelding’s first start since failing in two stakes races during the Brisbane winter carnival, including the Queensland Guineas (1600m), having won three-straight races before that in Melbourne.

“Things went a bit pear-shaped for him in the last campaign,” co-trainer Mathew Ellerton said.

“We took him to Brisbane and it was pretty fruitless so it’s good to pick up the pieces today.

“He just didn’t handle the right-handed way of going (in Brisbane). I thought he ran well enough in his first run up there and then Craig Williams just said he wanted to turn left the whole way up there in his next start.

“He may well also not be a miler.”

Ellerton, who trains in partnership with Simon Zahra, was delighted with how Zoutori was going leading into Saturday’s return and he opted to test him in the Bobbie Lewis (1200m) rather than run him in an 1100m handicap at Caulfield next week.

Ellerton believes off the back of that impressive performance he will likely keep Zoutori to sprints, with the Gilgai Stakes over the same course and distance among the options for his next start.

“I had my reservations whether he was going to be fast enough today and he put paid to those reservations pretty quickly,” Ellerton said.

Zoutori took his overall record to five wins from 14 starts, with three of those wins coming first-up from a spell.

“He is on the way up and he really put them to the sword today,” Meech said.