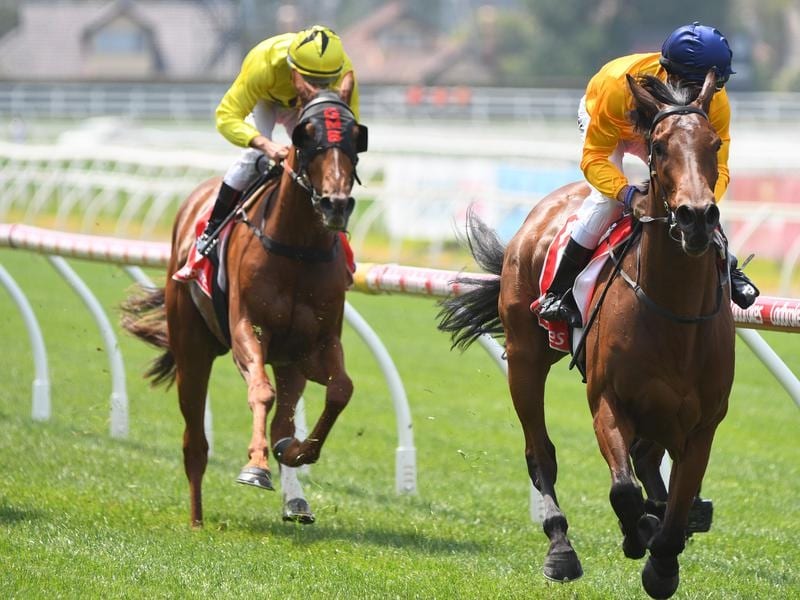 Mrs Beckham still has a lot to learn to be the complete racehorse but co-trainer Simon Zahra liked what he saw from the filly in her maiden victory at Caulfield.

Zahra, who trains in partnership with Mathew Ellerton, said Mrs Beckham could reach greater heights after a dominant display in the Ladbrokes Back Yourself Plate on Wednesday.

In contrast to her first-up run at Sandown a fortnight earlier where Mrs Beckham hit the line strongly to finish third, the filly on Wednesday was ridden on speed by Chris Symons when running out a three length winner.

He said the stable has worked on getting the filly to relax.

“She’s gradually improved but when she learns to chill out and relax, she’ll be a nice horse,” Zahra said.

“While the summer’s a little bit weak and you can get some of these types of races, it’s worth pressing on, for at least one more.

“Plus she’s Super VOBIS qualified, so she’s racing for good money over summer.”

Longer term, Zahra hopes Mrs Beckman will measure up to the fillies staying classics during the autumn and winter in Adelaide and Queensland.

“She’s going to get a bit of ground as she’s got a nice action, but she just over-raced a touch today,” Zahra said.

“They were running along a bit, it was a pretty strongly run race, but we’ve got to get her to chill out a bit.

“She’s a nice filly in the making.”