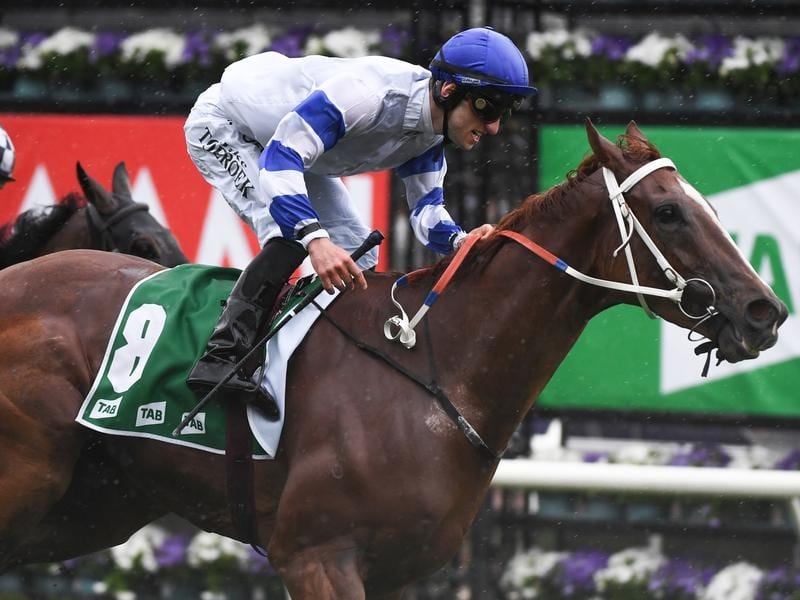 Young Adelaide jockey Jake Toeroek has celebrated one of his most significant wins, guiding Kemalpasa to victory in the opening race on Victoria Derby day at Flemington.

Trained by Richard and Chantelle Jolly, Kemalpasa has been in a purple patch of form, his victory in Saturday’s Group Two TAB Stakes (1200m) taking his record to six wins in seven campaign starts.

Toeroek has had a great association with the horse and was happy to turn down a strong book of rides in Adelaide to ride at the Derby day meeting.

“What a thrill,” Toeroeck said.

“First carnival win. I’ve come over here a few times now and had a few placings.

“I would have had a fair book back home today, but to come over here on Derby Day and to get one away, it’s unreal.”

Jolly, who trains at Morphettville, said Kemalpasa had come a long way since breaking his maiden at a South Australian country meeting just over a year ago.

“He won a maiden at Halidon and then went to Port Lincoln so I didn’t expect to be here just over 12 months later,” Richard Jolly said.

“It’s great to have a horse good enough to be competitive to run here, let alone win a race, so I think we’ll have a few celebrations tonight.”

Co-trainer Mat Ellerton said the favourite struggled to handle the deteriorating track, which was downgraded to slow before the first race.

Ellerton will consider backing up Zoutori in next Saturday’s Group One Darley Sprint Classic.