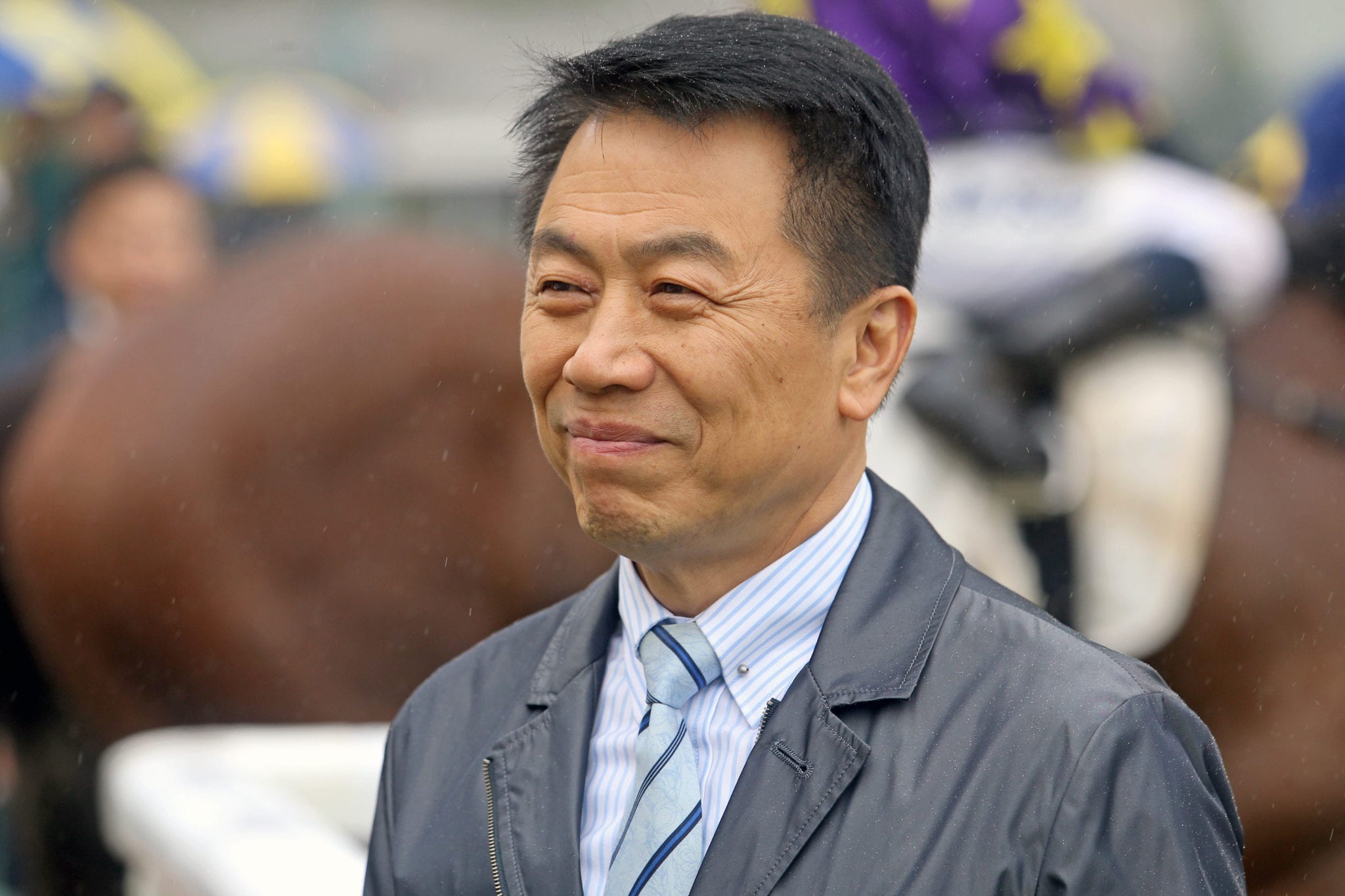 Cruz has trimmed Yiu’s lead at the top down to five (57-52) with 10 wins since the start of May against the championship leader’s four. But on Wednesday, Cruz has only three entries to Yiu’s five.

“I’ll try to hang on as best I can,” Yiu said. “There’s still one and a half months to go and everyone is trying to do their best. I’m still five wins ahead of Tony Cruz but he has a lot of up and coming young horses to be competitive, so it’s going to be tough.”

Yiu has surged past his previous career-best tally of 49 wins set in 2010/11. The man responsible for champions like Sacred Kingdom, Fairy King Prawn and Amber Sky has a total count of 803 Hong Kong successes across a 25-season career, which commenced in 1995/96.

His five runners on Wednesday are highlighted by New Zealand import Super Oasis, who finished second at his first run for the handler last start after switching stables.

“The way he goes he can handle Happy Valley pretty well,” Yiu said. “It’s a similar field to what he faced last time and the change of jockey might give him some help, you just never know with these things.”

The Rock ‘N’ Pop gelding will step out for his eighth Hong Kong start and will break from gate two under Frenchman Antoine Hamelin, with 129lb on his back.

“I think he’s still improving, he’s a nice horse and he’s beautiful to work with but I just hope he can hang on over the final part of the race,” Yiu continued. “It seems as though he fades just before the winning post and I hope it isn’t a habit of his.”

The four-year-old had classy form pre-import for trainer Tony Pike: two Group 2 wins in New Zealand before crossing the Tasman Sea to finish third in the 2019 Group 1 Australian Derby (2400m) at Randwick. Hamelin is looking forward to getting aboard the bay for the first time.

“Super Oasis is a very nice ride,” Hamelin said. “But he’s not the only one, I have a few nice ones for Ricky on Wednesday. I’m very happy to ride for him, he’s had a lot of success this year.”

Yiu and Hamelin have combined for two wins this season and pair up at the city circuit with four chances, including last-start victor After Me in section one of the Class 4 Wyndham Handicap (1650m).

“He’s done amazing – he started from the top of Class 5 and has worked his way all the way up. Even the change in distance, he’s coped with it, and I believe he will do well again,” Yiu said.

The Equiano five-year-old comes in off the back of an eye-catching last-to-first win from gate 10 with Hamelin in the plate, but this time he will break from gate five.

“He has a better draw this time, the jockey knows him well, last time he was at the tail of the field nearly the whole way so I would expect that he will travel midfield somewhere. That should make it easier for him as he’s still holding his form,” Yiu said.

Yiu also looks to Hamelin aboard Island Shine in the finale, the Class 3 Graham Handicap (1200m).

“He’s a nice horse, he only had six starts in Australia. I think he still has more improvement in him as he is very lightly raced,” Yiu said.

The Darci Brahma gelding was a two-time winner at Pakenham pre-import and also finished runner-up at Sandown to Age Of Chivalry who since then has placed in two Group 1 races at Caulfield.

Hamelin is one of three riders with a full book of mounts, the other two being three-time champion jockeys Zac Purton and Joao Moreira who are fighting for the jockey title, with the Australian four ahead of the Brazilian.

Yiu believes the Frenchman, 28, is not out of place competing against the top jockeys, having made a strong start to his Hong Kong career with 13 wins since commencing his contract in early April.

“He’s one of the strongest riders in the finish of a race in Hong Kong,” Yiu said. “He’s very straightforward, he’s done really well for his first time in Hong Kong – on the dirt, the turf on everything.”