Written By On Song For Group One Assault 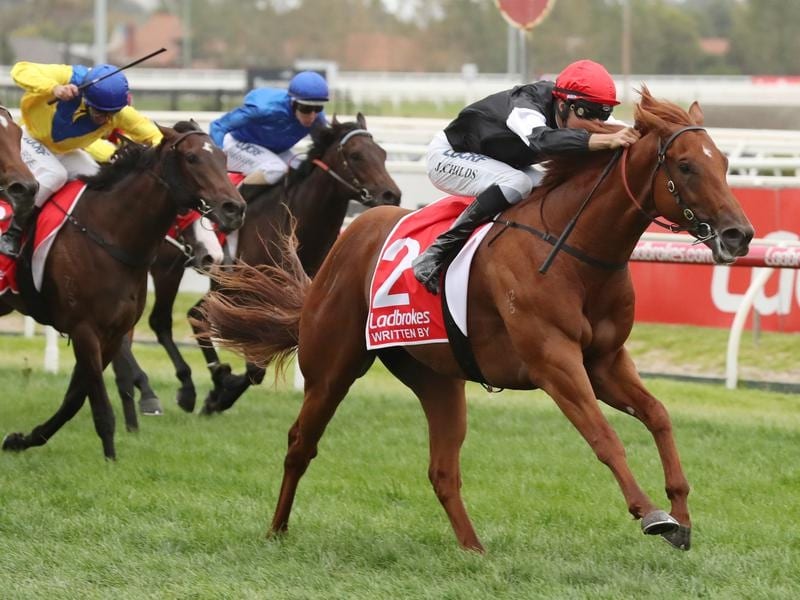 Trainer Grahame Begg has taken the opportunity to give star colt Written By a look at Moonee Valley, 10 days out from a Group One assignment.

Written By and stablemate Our Libretto galloped on Tuesday ahead of races at the track on March 22.

Three-year-old Written By tackles the William Reid Stakes (1200m) with Our Libretto to run first-up in the Group Two Sunline Stakes (1600m).

Begg said the track was on the soft side but he was happy with Written By’s work.

“We sat him four lengths off his workmate and he worked up to him in the last bit,” Begg said.

“He had a trial at Cranbourne last week and going over to Moonee Valley was good timing rather than going over next Monday, four days before he’s due to run.

“He’s on song for the William Reid.”

Winner of the Blue Diamond Stakes for two-year-olds in 2018, Written By has had two runs this campaign.

He finished second to Bons Away in the W J Adams Stakes at Caulfield on February 2 before running sixth to In Her Time in the Lightning Stakes at Flemington on February 16.

“The Lightning was a funny run race,” Begg said.

“They didn’t go much of a gallop in the early stages. It was a sit up and sprint and he needs to run along.

“That’s the way he runs best, when he’s allowed to stride, so that’s the idea behind waiting and dropping back to run around the circle.”

Lightly raced Our Libretto, victorious at her first four starts for Begg, hasn’t race since finishing third in the Sandown Classic in November.

Begg said while Moonee Valley was unlikely to suit the mare, she would start her campaign in the Sunline Stakes before heading to Sydney for April’s Group One Coolmore Legacy then further north for the Hollindale Stakes and Doomben Cup.