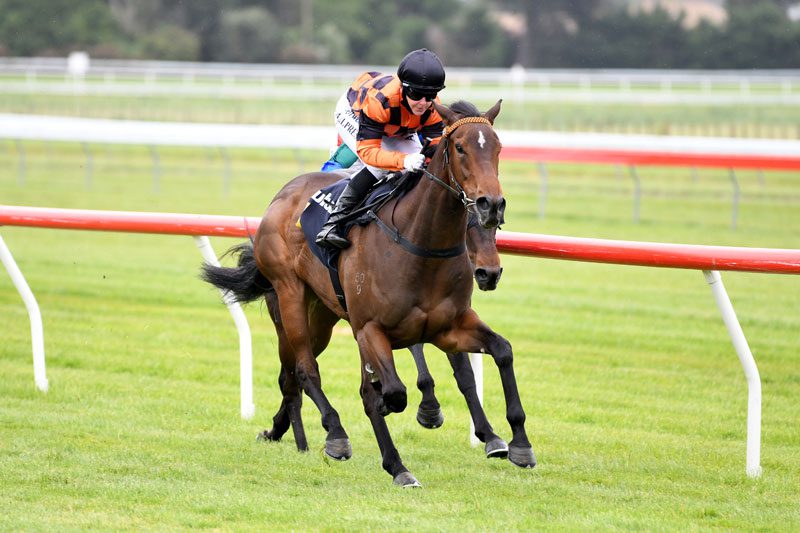 Awapuni trainer Roydon Bergerson unveiled an exciting prospect when two-year-old filly Wolverine made a winning debut over 1100m at Otaki on Thursday.

The daughter of Tivaci came from behind favourite Gibraltar Rising to win by a length on her merits under Lisa Allpress, with a whopping 15 lengths back to third-placed Gunnagetyabeans.

“I was really happy with her. She trialled up really well and did everything right today and got the job done,” Bergerson said.

“Billy Pinn, who rode Gibraltar Rising, who looks a nice horse, said she went past that fast that he nearly fell off.”

Bergerson purchased the filly for NZD$50,000 at Karaka from the draft of Waikato Stud in conjunction with respected judge Chris Rutten.

“She is in the paddock at Chris Rutten’s at the moment,” Bergerson said.

“She left straight after her race and she will have four or five days there and then she will come back and probably go onto the Wakefield Challenge Stakes (Group 2, 1100m) and then hopefully on to the Karaka Million (RL, 1200m).”

Bergerson is a fan of the progeny of Waikato Stud stallion Tivaci, who has already sired a Group One winner from his first crop with three-year-old filly Never Been Kissed.

“I had a Tivaci that we sold to Kris Lees, called Mount Smart, who was a nice big three-year-old gelding. He won two trials here and he raced on Melbourne Cup day at Randwick but over-raced when sixth,” Bergerson said.

“I have got a nice two-year-old filly by Tivaci out of Exactly Like You. I really like them. I think they are really nice horses and good to train.”

While Pinn might have been beaten aboard Gibraltar Rising, he went on to ride a treble for Marton trainer Fraser Auret at the Otaki meeting.