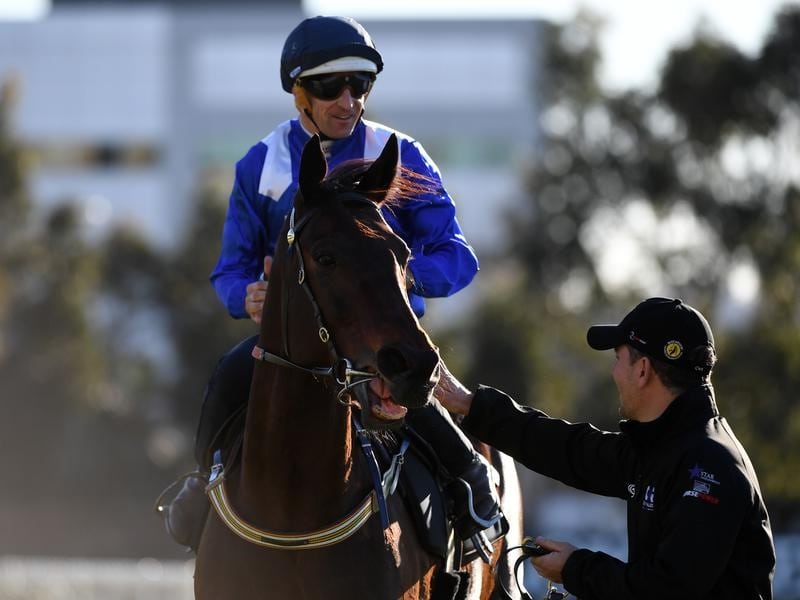 Winx is happy, trainer Chris Waller is happy and her jockey couldn’t be any happier.

Hugh Bowman has given the champion a testing hit-out in a Rosehill barrier trial and declared it her best pre-race performance.

The mare finished an eye-catching third behind Group One winners Alizee and Ace High in the 1000m heat on Tuesday after Bowman urged her between runners from last early.

“I know she won a trial this time last year but this was better.

“I asked her to use herself this morning and she was very impressive.

“There’s no doubt she wants to be there.”

Trainer Chris Waller took Winx to Randwick on Saturday for a race day gallop and to familiarise her with the new horse stalls.

She had a solo gallop and Bowman admitted he had struggled to hold her back and that she had come on from that.

“She looked good to me and it is refreshing to hear Hugh Bowman say that,” Waller said.

“It is what I had hoped for and she is on target for two weeks.”

Winx will return to racing on August 18 week in the Group One race named in her honour.

Formerly the Group Two Warwick Stakes, the Winx Stakes is over 1400m and is a race the mare has won twice.

If she wins again, Winx will establish an Australian record 26 consecutive wins after equalling Black Caviar earlier this year in the Queen Elizabeth Stakes.

Although Waller has reiterated the team will take it one race at a time, her spring program as a seven-year-old is being geared towards an unprecedented fourth Cox Plate.