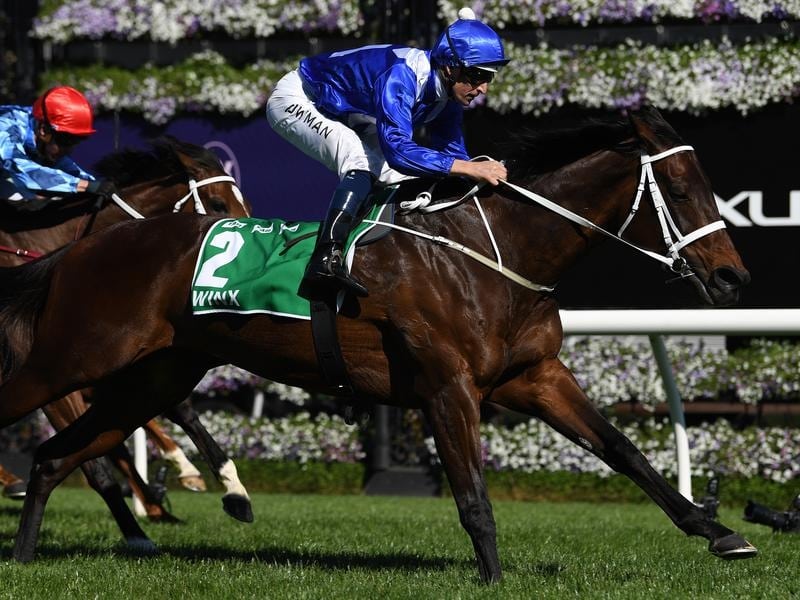 Chris Waller admitted to a rare moment of anxiety before Winx completed her 28th consecutive victory in taking out the Group One Turnbull Stakes at Flemington.

Winx was locked away on inside in second last place as Saturday’s field run into the straight with jockey Hugh Bowman searching for clear racing room.

“I did get a few flutters until she got a clear run and there will be a day when she’s not as dominant, but today all she had to do was repeat her form and she did,” Waller said.

“She hasn’t been in that position for a long time and I suppose the Doncaster was one of those races.

Backed from $1.14 into $1.10, Winx eventually powered her way to a length victory over stablemate Youngstar ($41) with Kings Will Dream ($14) three-quarters-of-a-length away third.

Waller agreed Bowman had ice in his veins after Winx claimed her 21st Group One win.

“Whether you’ve got nowhere to go or you’re riding Winx to the start, there’s enormous pressure.

“The way Hughie rode her was perfect.

“If you went to apprentice school on a Monday and show them that, every apprentice would turn out to be a genius.

“When you’re on Winx you have to try and not get held up, but it’s at Flemington and he got out with 400 metres to run.

“In reality she’s only made up five lengths in 400 metres and made a pretty good job of it.”

Bowman said he usually rides Winx with a touch of arrogance and lets her work into the race when it pleases him, but admitted he didn’t have that option on Saturday.

He said it was her champion qualities that shone through.

“When I peeled off … and went after them I thought we’re in for a fight,” Bowman said.

“The final 100 (metres) was extraordinary and that will do her the world of good.

“It will bring her on nicely for a fourth Cox Plate in three weeks time.”

Craig Williams, who rode the third-placed Kings Will Dream, said the performance of Winx again showed how dominant she is.

“My horse is a Group One weight-for-age star of the future and he ran really well,” Williams said.

“This race will end up being an unbelievably strong formline, all the way down to sixth, and that just showed the quality of this mare.”