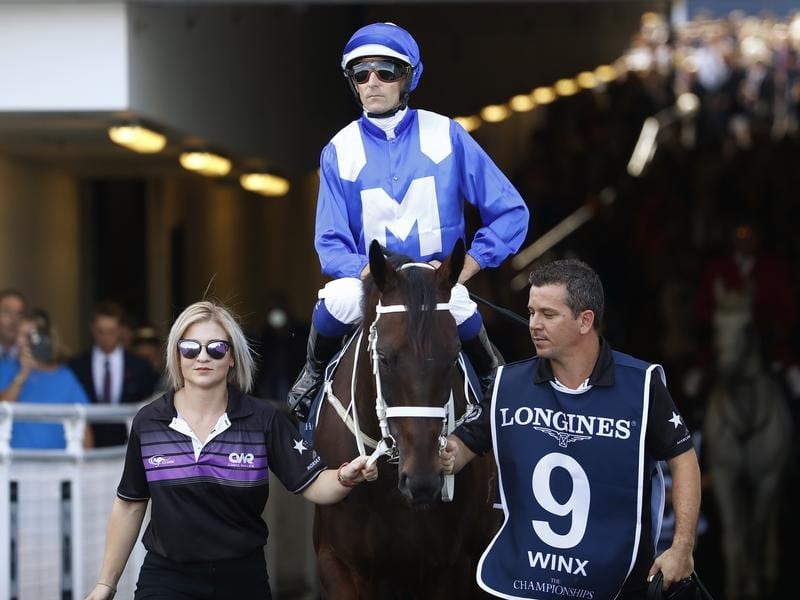 Champion Winx will be seen before the end of the season with the mare to run in the first of two barrier trials ahead of a tilt at an unprecedented fourth Cox Plate.

Following a short break after her Queen Elizabeth Stakes win in April, Winx has been back at Rosehill building up to her next campaign and new horizons.

Her Queen Elizabeth win was her 18th at Group One level and extended her winning streak to 25, equal to unbeaten sprinter Black Caviar.

“She will run in a trial either at Warwick Farm on the 20th or Rosehill on the 23rd,” Waller said.

“Hugh Bowman came and rode her during the week. He pulled up well. She pulled up better.

“The staff are happy with her and the boss is happy.”

Waller confirmed her first target was the race upgraded and renamed in her honour on August 18 which she has won for the past two years.

Formerly the Group Two Warwick Stakes (1400m), it is now the Group One Winx Stakes.

Waller says he is more relaxed going into this Cox Plate campaign than a year ago.

“It’s a learning curve training a horse like her,” he said.

“I’m almost getting used to it.

“The first year it was all new.

“The second year there was pressure to perform and do it again.

“The third year was a whole new level again because of the records she was setting or getting near.

“The fourth year is a bit like last year. We’ve been there before and I’m quite relaxed about it.”

“Her body language is great and she’s happy and healthy,” he said.

Options after the Winx Stakes include races in Sydney and Melbourne on the way to the Cox Plate at Moonee Valley on October 27.