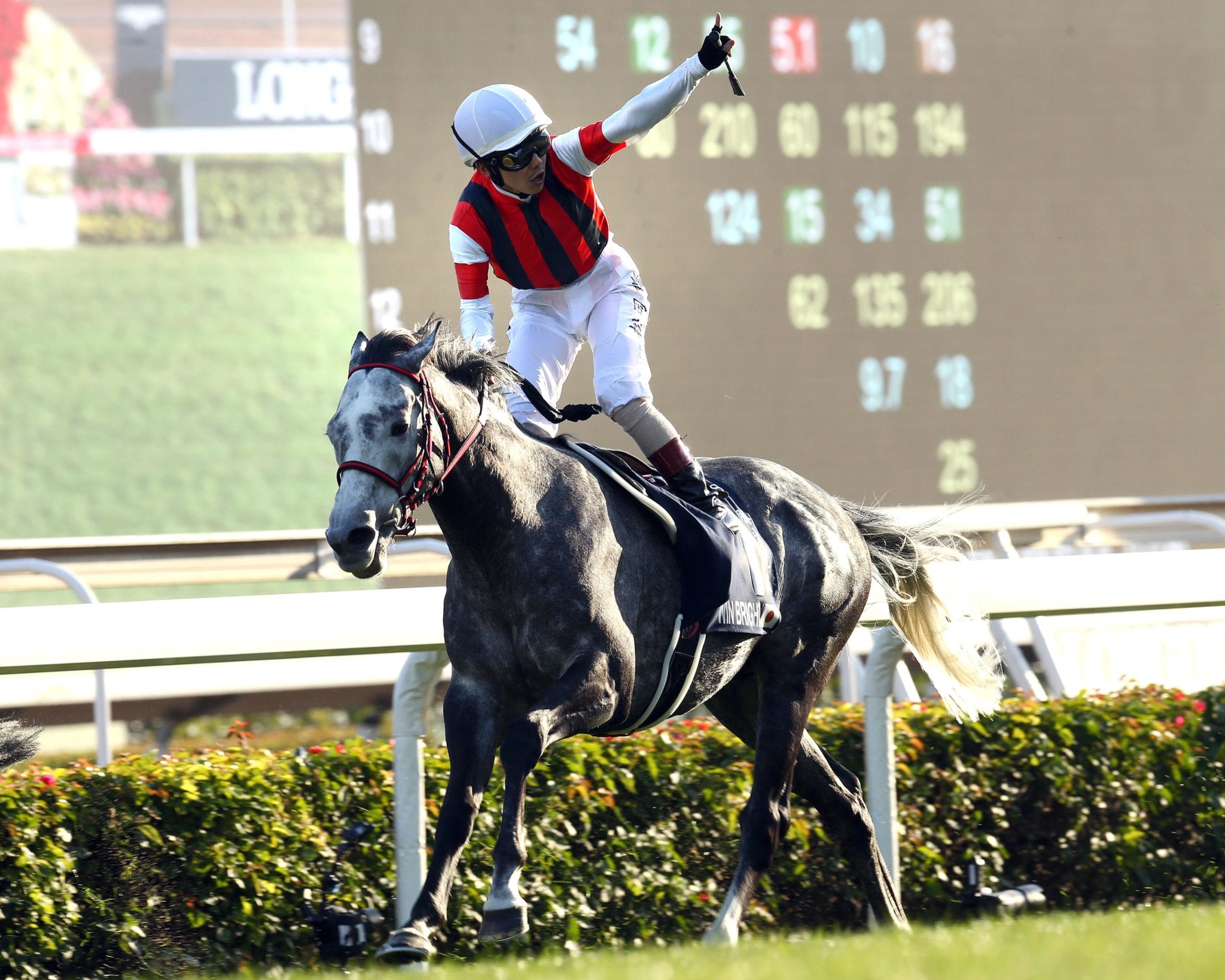 Win Bright produced a performance hallmarked with toughness to go with his considerable class to complete the Group 1 double of the LONGINES Hong Kong Cup (2000m) and April’s FWD QEII Cup (2000m) for trainer Yoshihiro Hatakeyama and jockey Masami Matsuoka.

In doing so the steel-grey son of Stay Gold held off the late lunge of Ireland’s Magic Wand to assure the 2019 LONGINES Hong Kong International Races meeting will be remembered as a standout day for Japan’s horsemen, as Win Bright followed Glory Vase and Admire Mars into the Sha Tin winners’ enclosure.

To no great surprise Time Warp got to the first bend a step ahead of his brother Glorious Forever, with Magic Wand and Win Bright making up the second rank of two.

Karis Teetan committed Time Warp at the top of the straight but Matsuoka had angled three wide off the bend and wound Win Bright up for what proved to be an irresistible charge down the straight.

Rise High proved to be the best of those to come from off the pace and looked a threat inside the 200m pole but it was Magic Wand that threw down the final challenge after Ryan Moore had been forced to weave in and around horses, only finding clear sailing late on.

It was a fine ride from Matsuoka, who has been shown great loyalty by owners Win Co Ltd at a time when the fashion has been to go after visiting superstars.

Win Bright was the only horse among nine sent from Japan across the four Group 1 races to be partnered by a home-born jockey.

“It went the way we were expecting,” Matsuoka said. I thought the pace would be slow so I wanted to sit third or fourth. I was very happy it all went to plan

“We perhaps made our move maybe a bit early as we were carrying plenty of speed into the straight.”

For Hatakeyama, this was a triumphant return to Hong Kong and a brilliant piece of target training, coming as it did off the back of a less-than-inspiring performance when eighth to the all-conquering Almond Eye in the Tenno Sho Autumn.

“After his summer break he couldn’t get into top condition,” Hatakeyama said. “His last two runs were below what I expected but he began to improve straight after the Tenno Sho Autumn and we always wanted to come here if we got the invite.

“He was in really good shape by the time he left Japan and that is why we were able to follow the same routine here as when we came in April.

“Tactically the race went exactly to plan. We wanted to sit handy. At the first bend he tried to tuck in and perhaps put a little pressure to the others. He came home really well in the straight.”

Matsuoka was quick to pay tribute to the trainer’s efforts in getting Win Bright to peak for the day that mattered.

“This is great because his last two starts have not been satisfactory. The horse has been improving all week since he got here. We had a memorable day in April and it is special to come back,” the rider said.

Hatakeyama started out in the mid-1980s as a JRA work-rider and Win Bright’s two triumphs in Hong Kong are the fulfilment of lifelong ambitions sparked by a spell riding out for Irish master trainer John Oxx, a man he described as “a great teacher.”

“When I started training I used to dream all the time about sending my horses to the big overseas Group 1 races and I have been waiting for days like this ever since I got my training licence 20 years ago.”

For the Ballydoyle team there will be a sense that this might have been one that got away, as Magic Wand’s 12th start of 2019 was a luckless one.

Smartly away and never far off the pace, Moore came off the rail in search of a run but was forced to wait a fraction before easing past Furore and onto the heels of Win Bright.

The Caspar Fownes-trained Rise High ran a big race under Vincent Ho and proved the best of the home defence, finishing a short-head and half a length behind two genuine international Group 1 performers.

Ho said: “He had a perfect position and travelled very nicely but Win Bright and Magic Wand were too good for him today. It was a good run and I think he will come back stronger.”

It was a performance which suggested big days ahead but, with Hatakeyama planning a third trip to Sha Tin for Win Bright next April, pretenders to the throne know exactly what will be required.