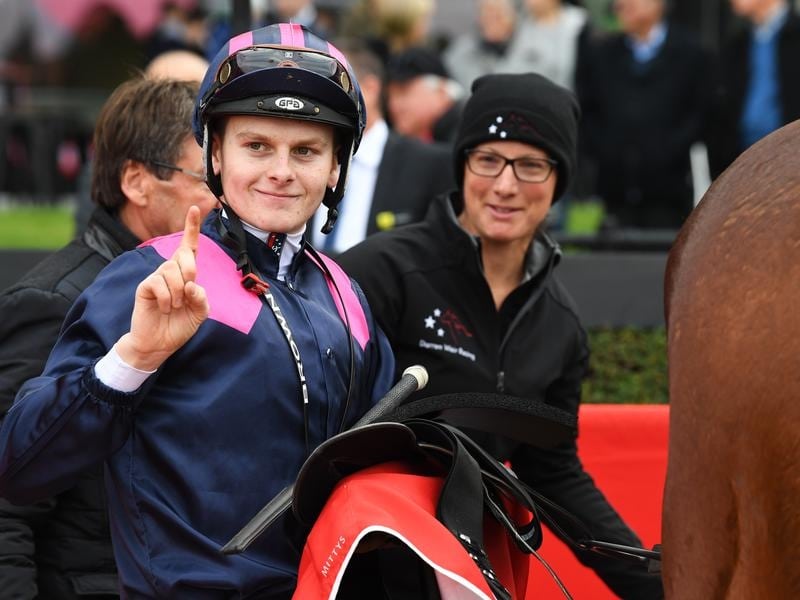 Spurred on by the chance to claim a seventh Melbourne jockeys’ premiership, Craig Williams has regained the lead in this season’s title race after a winning double at Moonee Valley.

Williams started Wednesday’s meeting one win behind Damian Lane who was not riding at the meeting and will also miss Saturday’s meeting at Caulfield.

Williams drew level in the opening race with victory aboard the Shea Eden-trained two-year-old filly Bright Eyes and then added another on three-year-old filly Jungle Queen.

The reigning premier rider in Melbourne said it was great competition again this season with Lane a formidable challenger.

“But luckily for me he’s given me a couple of free kicks as he’s gone over to celebrate (fellow jockey) Mark Zahra’s wedding in America,” Williams said.

The one-length win of Jungle Queen ($5.50) in the Woodside Park Stud Handicap (1000m) was significant for Wangaratta trainer Christopher Davis who celebrated his first metropolitan winner.

Apprentice Ethan Brown is five wins behind Williams in third in the jockeys’ premiership on 44 wins and added to his tally on the Darren Weir-trained Hectopascal in the Ladbrokes Odds Boost Handicap.

“I’ve hit a bit of a flat spot of late but it was good to get another winner,” Brown said.

Stephanie Thornton also achieved a milestone at the meeting, with her win on $3.50 favourite Belwazi in the Sheamus Mills Bloodstock Handicap (1000m) bringing up 19-year-old apprentice’s 100th career winner.

“I felt like I’ve been stuck on 99 for a couple of weeks now so it’s great to get the monkey off the back,” Thornton said.

“It’s a great milestone for me and hopefully now with another city winner I can keep the momentum going.”

Thornton did keep the momentum going, guiding Nordic Empire to a front-running win in the next race, the Mittys Handicap (1200m), taking her tally of city winners in Melbourne this season to 24.

Nordic Empire ($4), who had won at Sandown earlier this month at his most recent start, opened up a winning break around the home turn and scored by 1-1/2-lengths over $3.10 favourite Demolition.