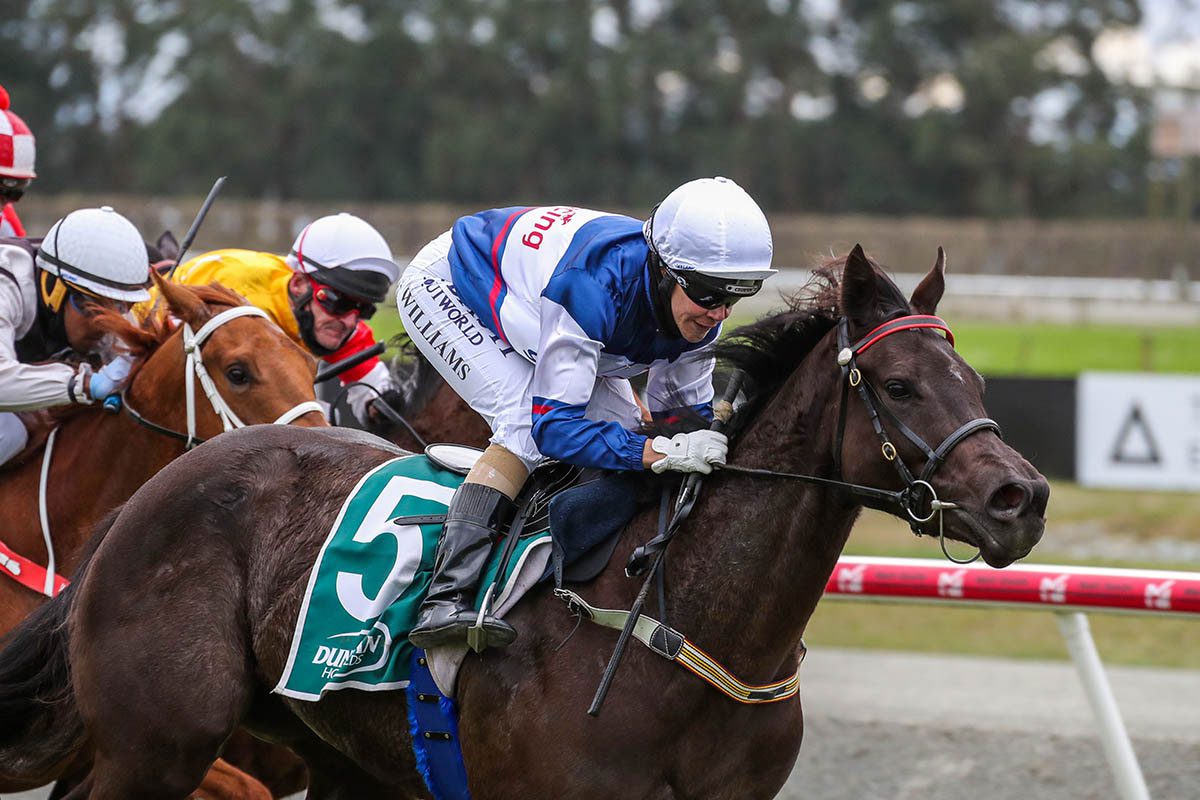 While set to ride a quality book at the Christchurch meeting, she will also have her first runner as a trainer in six years.

Williams previously trained for eight seasons where she recorded five wins and she is looking forward to returning to the training ranks this weekend when she will line-up debutant Grandiloquent in the Speight’s Maiden (1200m).

Williams has had the four-year-old gelding in her care since he was a weanling and she is hoping her hard work over the last few years will pay off on Saturday.

“We saw him on Gavelhouse when he was a weanling. I used to ride his mother (Esquina), that Jan Hay trained,” Williams said.

“My friend was looking for a horse so we bought him and have had him all the way through.

“He has always shown a wee bit, but he is one of those horses that has taken three or four times to do something before he clicks on.”

The son of Makfi has had four trials, including two this preparation, and Williams has been happy with what she has seen.

“The first trial was just experience, and the second trial he won that and then went out for a spell,” she said.

“Both trials this time in he has probably been a little bit fat and the tracks have been a bit wet, and I don’t think he is a wet tracker.

“They have both been encouraging enough, knowing that he wasn’t quite ready. It has just been a bit of experience for him.”

Williams has recently doubled the size of her team with the acquisition of Just Maybe, another gavelhouse.com purchase.

“I have got a three-year-old filly that we bought off Graham Richardson, that was on Gavelhouse, called Just Maybe. She is a Tivaci filly and has just come into work,” Williams said.

“I just have those two. They are enough, between them and kids.”

Williams is enjoying training and said it gives another perspective on raceday.

“It is a new challenge and you get a different perspective from being a jockey. You understand the work that goes into getting horses ready for the races,” she said.

“Art De Triomphe is pretty smart,” Williams said. “The way she won the other day when she wasn’t 100 percent fit and her coat is still falling out, it was quite impressive.

“She is pretty quiet, so that makes it easier when you can ride ones like that. They adapt to things pretty easy.

“She has drawn wide (11) but we will probably get her back again because she has got that amazing turn of foot.

“Severine trialled up nicely a couple of weeks ago. It is quite a smart field and 1200m is probably not her ideal distance. She is fresh-up and is looking forward to other races, this will be a guide for them.”

The Ocean Park five-year-old gelding has won four of his six starts, finishing runner-up in his other two appearances, and Williams has been pleased with his two trials ahead of Saturday.

“I rode him quite a bit last year before I got hurt and then missed out on a few of the rides,” Williams said.

“His trials this time in have been encouraging. He is fresh-up into 1800m but you can always trust Terri to have a horse spot-on on raceday.

“He trialled up the same day as Southern Ocean,” Williams said. “He didn’t get a lot of room in the trial, so it was a bit quiet, but he is a lovely big horse who has shown a bit of ability. He wouldn’t be the worst in that field.”

The Steve Tyler-trained gelding was unplaced in his first two starts this preparation before winning at Ashburton and finishing runner-up last start at the same Canterbury course.

“His first two runs probably didn’t look much to people but riding him he looked quite encouraging,” Williams said.

“When he raced at the National (meeting) I said to Steve ‘he will run in the money next start’, and he came out and won.

“Stepping up in grade and weight, he probably should have won his next start, but I have looked after him a little bit instead of sending him on a mission.

“He is going back to the 2000m and the big straight at Riccarton will suit him. He is a nice horse going forward.”