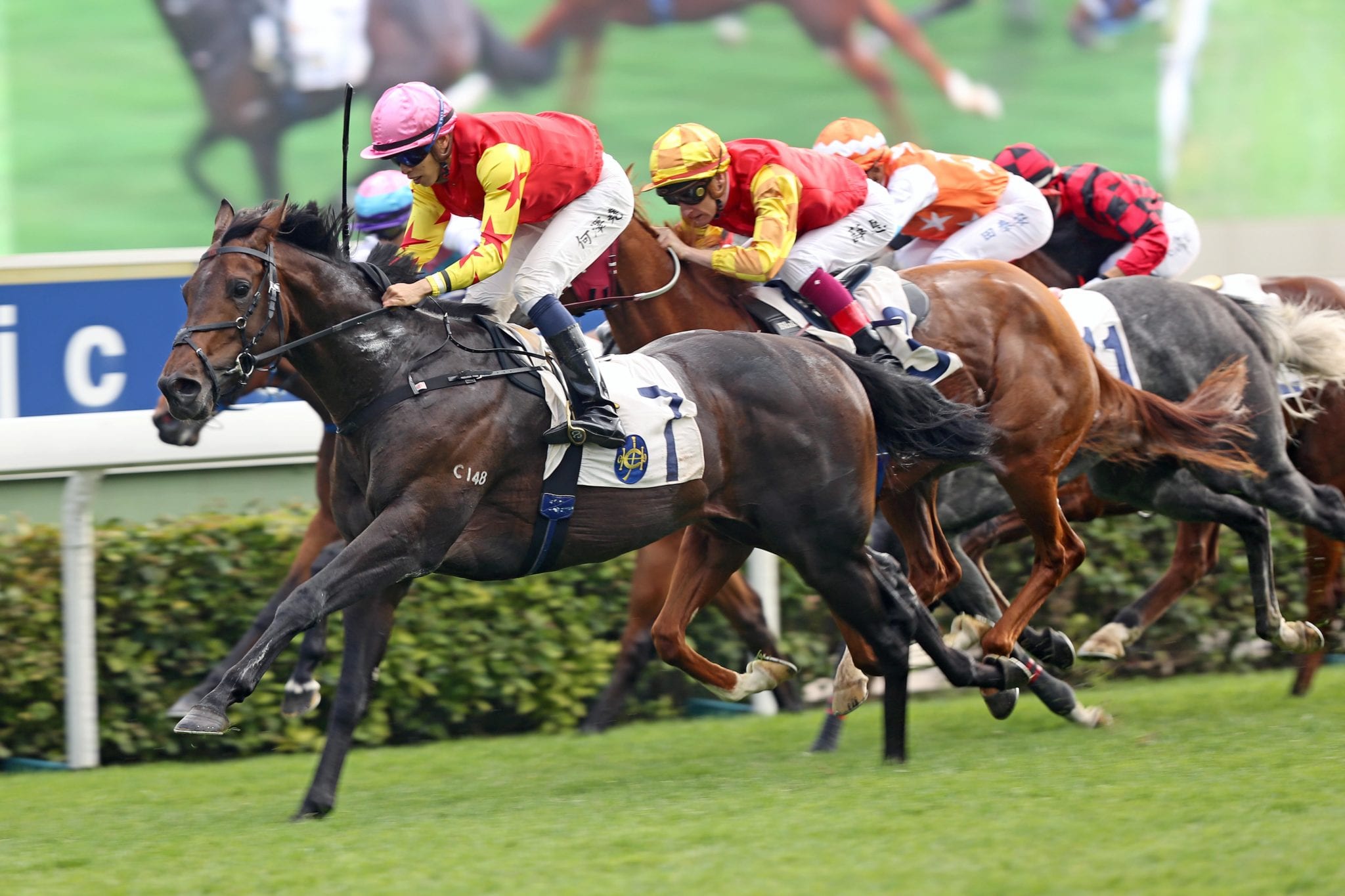 Douglas Whyte’s success with his young stock continued with wins yesterday afternoon (Saturday, 11 January) at Sha Tin for his smart prospects Farhh Above and Inner Flame.

Farhh Above returned from a lay-off for his belated seasonal debut and charged emphatically from the tail to snare the Class 3 Nga Tsin Wai Handicap (1200m) under Vincent Ho, clocking a swift 21.62s for the final 400m.

“He’s a lovely horse; he’s got a very good turn-of-foot. To let down the way he did, that was a very good effort,” Whyte said.

The four-year-old, trained by Francis Lui previously, was a decent second to the Group 1-placed sprint star Aethero on debut last term and followed that with a win, suggesting he could turn out to be a viable Four-Year-Old Classic Series prospect. With the first leg of that series, the Hong Kong Classic Mile, set for 27 January, Whyte was reluctant to commit to such a route but did not dismiss altogether the colt’s participation at some stage of the three-race test.

“It’s always at the back of your mind on what he did,” Whyte admitted, “but then everything slows down and goes out the window when he’s had that much time off and you’ve got to nurse him back and put him in cotton wool. He’s been out of cotton wool for a while now and he’s answered everything I’ve asked of him in order to be competitive first-up.

“He had to be competitive first-up if he’s to compete in any of the Series,” he continued. “The problem is he’s just run out of time; time is against him. He’s probably a month behind and I refuse to look at a race and say we’re going for that – it’s all about him. It’s taken that long to get him to the races I’m certainly not going to ruin him by finding a race and putting him in because it’s part of a series, or a big race. I’ve got too much respect for the horse and I think he’s too good a horse to be doing that with.”

Farhh Above was diagnosed with bone stress in his limbs at the end of September and Whyte took a patient approach before placing him in a couple of barrier trials during December, the latest at Happy Valley.

“Fingers crossed he can improve on that run,” the first-season handler said. “Any horse that can come from last to first the way that he did it, on a track like today, it’s got to be a nice horse in the making.

“It’s all about the horse first and he’ll indicate to me when we’re next going to turn up at the races. I think I’d look towards 1400 metres now, he ultimately wants a mile but after that run I’m sure the speed will be out of him and he’ll be crying out for 1400 metres.”

Earlier on the card, Inner Flame overcame top-weight to land section one of the Class 4 Carpenter Handicap (1200m).

The Zoustar four-year-old was raised eight points in the ratings for a debut win last month but shrugged off that and the closing first-time starter Ping Hai Bravo (125lb) to take his career record to two wins from as many runs.

“I wasn’t that concerned about the weight because he’s improved at home and he’s quite a solid unit,” Whyte said. “It was just more about getting the right kind of run – if you’re caught three-wide with 133 on a young horse it’s detrimental and those sorts of circumstances could have cost him the race.

Alexis Badel, on a roll with the 13th win of his winter contract, drove the chestnut a length and a half clear at the line.

“He was given a beautiful ride, he got some lovely cover, he cut the corner and he picked up well; he’s a thorough professional and I was happy to see him come to the races and improve on his effort first-up, which he needed to do to deliver the goods,” Whyte said.

“The way he’s improved and what he’s shown me, how he’s enjoying stepping out, he’s going to handle himself and he’s going to be competitive in the next grade. I’m just happy if they turn up and keep producing runs like him.”