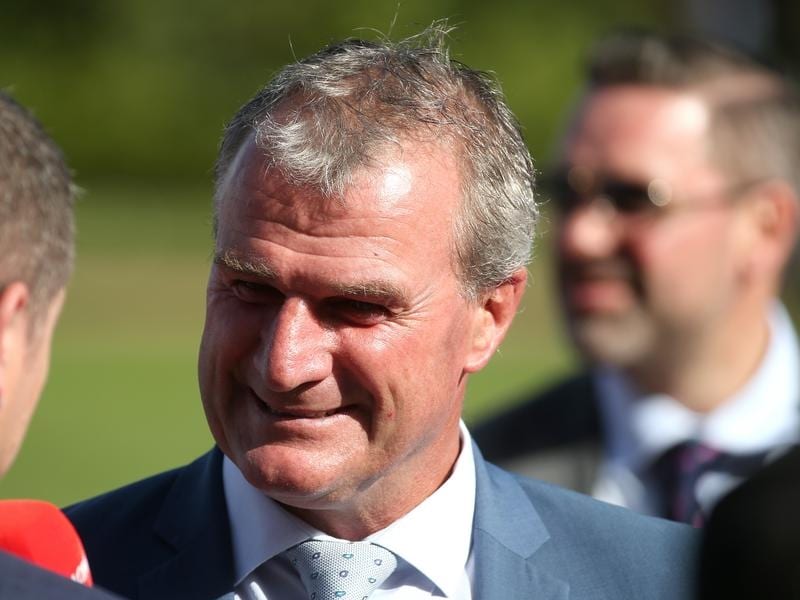 Champion trainer Darren Weir doesn’t know what to expect from stable newcomer Intelligence Cross in the Christmas Stakes at Caulfield.

The US-bred former Aidan O’Brien-trained sprinter made his way to Weir’s yard at the end of the spring carnival after being bought by stable clients.

Intelligence Cross was one of three O’Brien-trained sprinters sent to Melbourne for the spring but he failed to make an impact in three outings.

After bungling the start and finishing at the tail of the field in the Schillaci Stakes at Caulfield, Intelligence Cross contested two Group One sprints – the Manikato Stakes at Moonee Valley and the VRC Sprint Classic at Flemington – finishing closer to last than first on both occasions.

He is one of three runners Weir, who won the race last year with Stellar Collision, has in Wednesday’s 1200m-Listed race.

“He’s been at the beach at Warrnambool and I’ve got no idea how he’ll go,” Weir said.

“Really I’m just hoping but we’ll get a good look at him on Wednesday.”

Of the three, Intelligence Cross is the outsider at $17 with stablemate Native Soldier the $2.80 favourite and Platinum Angel at $6.

Native Soldier resumed from a break for a fourth at Flemington on December 15 and last preparation won the McNeil Stakes over Wednesday’s course and distance in August.

“It looks a nice race for him but he’s taking on the older horses,” Weir said.

“He’s come on well and then he’ll go up to the Gold Coast for the Magic Millions (Guineas).”

Platinum Angel has been racing consistently and Weir said the mare would be suited by the small field.

“She’s going really good but it’s been a bit unfortunate that she hasn’t been able to win,” Weir said.

The stable has two runners in the Listed Lord Stakes, a race it won with Kenjorwood in 2016.

Weir said Age Of Fire was struggling to find form and he hoped the small field would suit while Bondeiger was returning to racing after a short break with a repeat win in February’s Launceston Cup in the stable’s sights.

“The plan was to give him a break and miss the spring and aim him for those races down in Tasmania,” Weir said.

“He’s good but needs a bit of cut in the ground which with a few warm days coming up, that’s not likely to happen.”