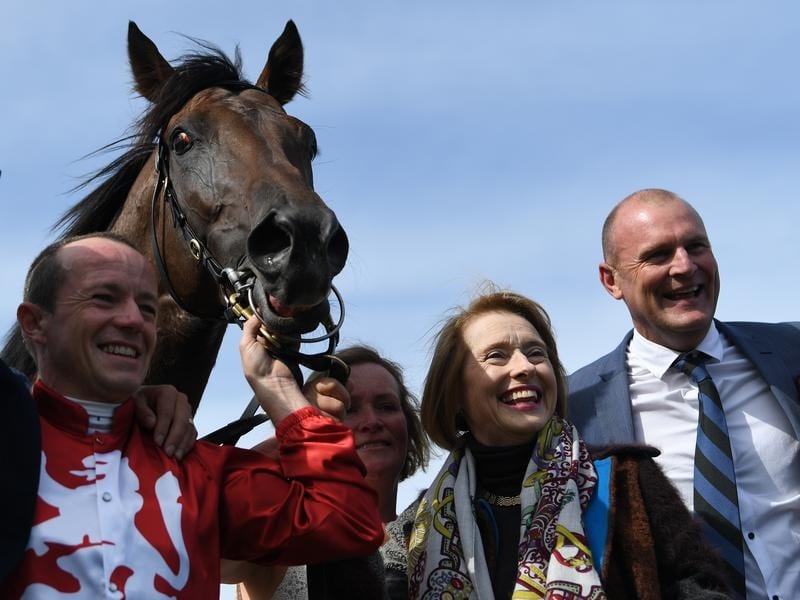 For Gai Waterhouse, having an Australian born and bred runner in the Melbourne Cup has helped to quickly erase any disappointment that Runaway’s stablemate Thinkin’ Big won’t also be lining up.

Thinkin’ Big went into Saturday’s Victoria Derby as the favourite and needed to win to take his place in the Cup, but finished unplaced.

Both Waterhouse and co-trainer Adrian Bott insist they are not disappointed with the result.

“It was his first prep, basically he’s done a great job,” Waterhouse said.

“He’s the kind of horse you’d like to have in your stable and there’s a big future for him.”

The focus now is whether Geelong Cup winner Runaway can deliver Waterhouse a second Melbourne Cup on Tuesday and a first for Bott.

“We’re really happy with him going into the Cup,” Waterhouse said.

Bott agrees Runaway is the right type of horse to deliver his big group of owners an amazing result on Tuesday, saying his pedigree and racing to date shows he has the ability to see out the 3200 metres.

“I think the Geelong Cup win was obviously full of a lot of merit. It was a strong run.”

Runaway, bred at Rosemont Stud near Geelong, is one of six Australasian-bred Melbourne Cup runners.

Asked to rate this year’s Cup field, Waterhouse, who won with Fiorente in 2013, said: “The Cup’s the Cup.

“You just love to have a runner in it and we’re lucky enough to have one in it Australian born and bred by a sire (Manhattan Rain) that I trained, what a remarkable thing, so we’re thrilled.”

Waterhouse and bloodstock agent Julian Blaxland paid $150,000 for Runaway at a 2016 yearling sale, and breeder Anthony Mithen bought back a quarter share with family, friends and Rosemont Stud workers.

The team behind Runaway is now so big Mithen is still meeting other part-owners for the first time.

Mithen has experienced the thrill of having a Cup runner twice before, but said breeding one takes it to another level.

“This feels particularly special because it’s just a little old home-bred from our farm,” he said.

After 10 previous rides in the Melbourne Cup, Stephen Baster has high hopes for Runaway.

“A lot of the other ones that I’ve ridden, I’ve been just happy to get in the race I guess, whereas I think he’s a good chance,” he said.

“It’s only his second time over the two miles but the last time he was over two miles was at the end of his prep, so this time he’s spot-on.”