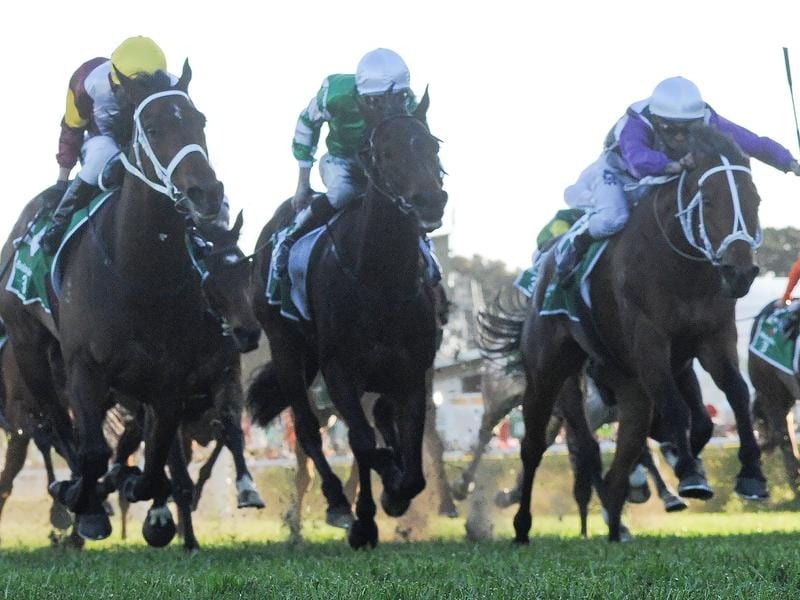 The Godolphin and Chris Waller stables split the Group One trophies on Golden Slipper day and are favoured to do so again at Rosehill.

The Waller-trained Verry Elleegant is favourite for Saturday’s Vinery Stud Stakes (2000m) while Godolphin’s Avilius heads the market for the Tancred (2400m).

Waller has two runners in the $1.5 million Tancred, Brimham Rocks and Metropolitan Handicap winner Patrick Erin but admits they both need to lift to have a chance.

But he cites excuses for Patrick Erin’s last-start failure in the Group Three Sky High Stakes (2000m) two weeks ago.

“He got a nasty bump as they jumped and ended up pulling up with a sore foot last start,” Waller said.

“He was sound within three days of the race and after the foot problem was discovered, it quickly improved and he has obviously trialled well since that.

“He heads to the races as a fit and sound horse. He has a nice draw, his wet track form is fairly good so he should get a lovely run from the good gate and hopefully bounce back to run in the top three to suggest that he is on track for the Sydney Cup in two weeks’ time.”

Brimham Rocks ran midfield in the Sky High, the best of his three runs this campaign.

In the spring he was placed in all five starts including the closest of seconds to Patrick Erin in the Group One Metropolitan (2400m).

“His runs have been below what I have expected from him this preparation,” Waller said.

“He has an awkward barrier (13). We will simply see how he jumps and work out from there where he can slot in.

“Hopefully two weeks out from the Sydney Cup he can run a creditable race to go into the Cup with a bit more confidence.”

Waller won the George Ryder with Winx, the Rosehill Guineas with The Autumn Sun and The Galaxy with Nature Strip.