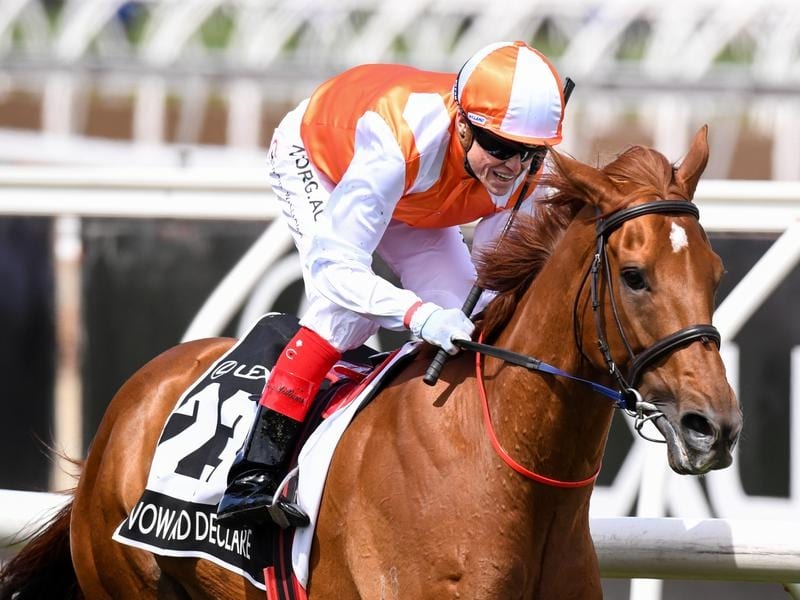 Danny O’Brien is confident his starters in the Turnbull Stakes, Vow And Declare and King Of Leogrance, are ready to win but he is worried about a lack of speed in the race.

“My concern is where the pace in the run will come from and whether it will be genuinely run as my pair will need that,” O’Brien said.

“The Makybe Diva Stakes was a messy race a couple of weeks ago and I’m worried about a similar scenario on Saturday.”

O’Brien said both horses were in great shape and were capable of winning the 2000m Group One race at Flemington on Saturday.

“I think Vow And Declare is back to his best and he loves Flemington. He also races well over 2000 metres there,” O’Brien said.

Vow And Declare finished fourth in last year’s Turnbull Stakes and earlier this year was third in the Australian Cup, both over 2000m at Flemington.

At his last start he ran on to finish ninth in the Makybe Diva Stakes.

Damien Oliver returns to partner Vow And Declare for the first time since last year’s Turnbull and he has first option on the ride in the Melbourne Cup with Craig Williams committing to Surprise Baby.

O’Brien intends to follow the same spring path as he did with Vow And Declare 12 months ago with the Caulfield Cup his final lead-in run to the two-mile feature.

King Of Leogrance hasn’t raced since he finished second in the Andrew Ramsden Stakes in May but O’Brien said he was ready for the challenge first-up on Saturday.

Connections are yet to make a decision about whether he will run in the Caulfield Cup.

“He pulled up a little lame last Saturday. I’ll try and get him back for a race over the Melbourne Cup carnival,” he said.

Boom galloper Russian Camelot pulled up well from his last-start win in the Underwood Stakes and will press on to the Caulfield Stakes as his final lead-in race before the Cox Plate.