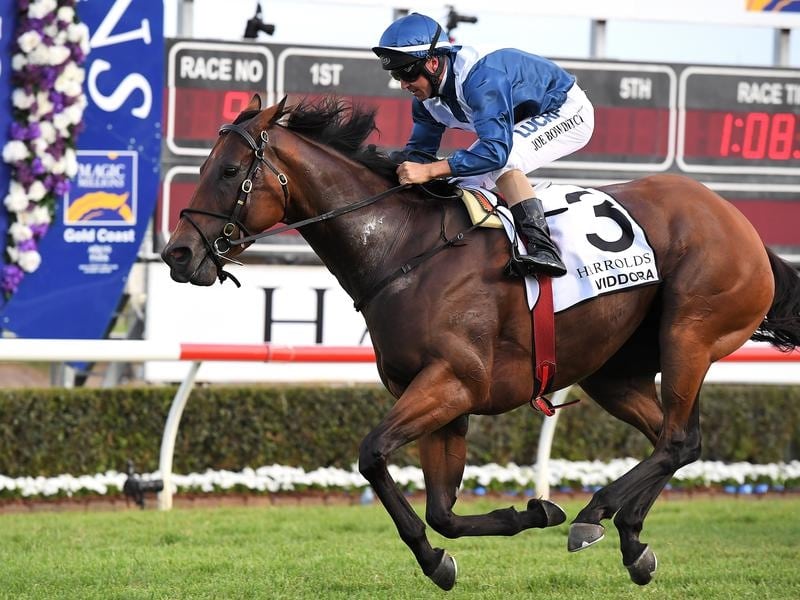 An impressive barrier trial at Cranbourne has Viddora on track for the Group One Moir Stakes.

Viddora was beaten in a photo finish by She Will Reign in last year’s Moir (1000m) at Moonee Valley and trainer Lloyd Kennewell has targeted the weight-for-age sprint on Friday week as her first-up assignment.

Monday’s 990m trial was part of the path to the Moir and Viddora cruised to a narrow win under her regular jockey Joe Bowditch.

“Everything we wanted to get out of the trial we got. She relaxed beautifully and travelled well the whole way. She just cruised around and did it as she liked so we were very happy.

“Everything is on target for the Moir. We’ve still got just under two weeks to go so we’ve just got to hope nothing goes wrong from now until then.

“She’ll go to The Valley for a gallop on Monday morning then she’s ready to go.”

Kennewell believes Viddora is going every bit as well as the same time last year and he is still hopeful the Winterbottom Stakes winner might get a late call-up for next month’s Everest with one slot remaining for the $13 million race.

“She’s up and running for the races that we want to get her ready for and if she happened to lob a slot in The Everest that’s a bonus. We’ll take it,” he said.

“We’ll let her do the talking in the Moir and hopefully she performs at her absolute best.”

Kennewell also has the Manikato Stakes in mind for Viddora who he hopes can defend the Winterbottom in Perth later in the year.

The Everest-bound Shoals was kept ticking over with a close second to Illustrious Lad in her 800m heat ahead of her second-up run in Saturday week’s Premiere Stakes in Sydney.