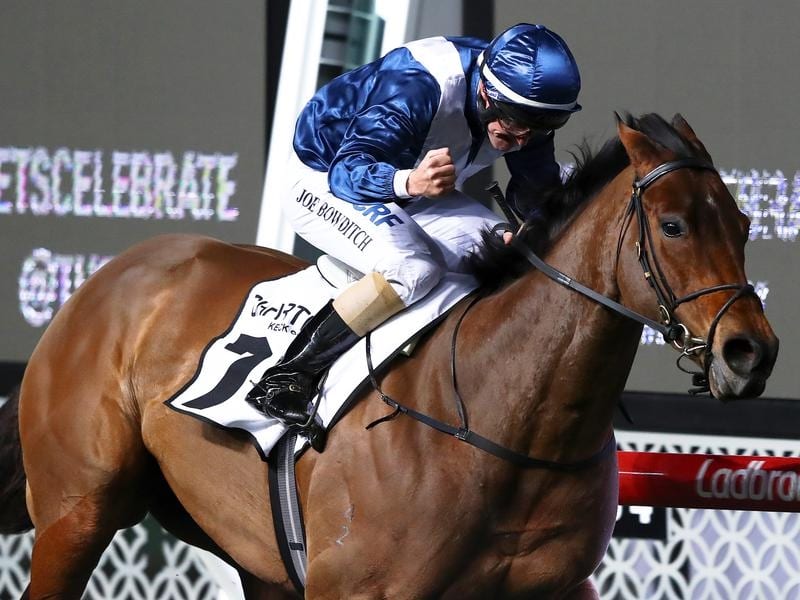 Trainer Lloyd Kennewell is counting down the days until Viddora’s defence of the Group One Winterbottom Stakes in Perth.

The well-travelled mare arrived in Western Australia on Monday morning after a flight from Melbourne which contained a number of eastern states horses set for feature races in Perth in the coming weeks.

Viddora won last year’s weight-for-age Winterbottom (1200m) and Kennewell is confident the dual Group One winner is in the right shape for her attempt to go back-to-back on Saturday week at Ascot.

He said once again the mare handled the travel faultlessly.

“She enjoys her travelling and she knows when she’s going on a holiday,” Kennewell said.

“She got on the plane, did everything right and she got there and licked the bin clean. I couldn’t be happier with her.”

Viddora was the $3.50 favourite in an all-in market on Wednesday and Kennewell believes this spring’s Moir Stakes winner is in the same vein of form as last year.

“There’s not much change. She was set for it last year and she’s been set for it this year,” he said.

“She’s ticked every box that we want so far. You’re just crossing the days off the calendar to make sure she’s sound every day before she gets to the races and nothing goes wrong.

“Everything is fine at the moment. She will have a good hit-out next week and she’s raring to go.”

Viddora finished 10th of 12 in the $13 million Everest at Randwick last month in her latest start but Kennewell is happy to forget that run on a heavy track.

“I think the form has been really solid out of it since,” he said.

“Most of the horses have been pretty resilient out of the race that didn’t handle the track because the track was absolutely bottomless.

“I would expect that she would be pretty resilient herself and she showed at the (Cranbourne) trials the other day that she was in good order.

“We’re pretty confident we’ve got the right horse in the right race.”

The first Group One race of this season’s Perth carnival, the Railway Stakes (1600m), is on Saturday with locally trained mare Galaxy Star favourite ahead of the Darren Weir-trained Peaceful State in the field of 15.