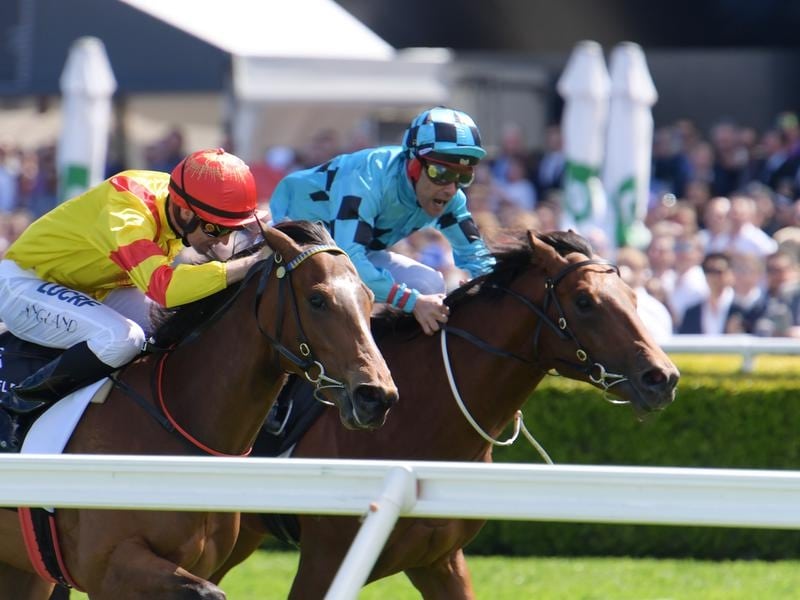 Dubious has created history with his Breeders’ Plate win at Randwick as the first Victorian-trained horse to win Sydney’s first juvenile race of the season for colts and geldings.

Trained by Ciaron Maher and David Eustace for Aquis Farm, Dubious was a $19 chance in Saturday’s 1000m sprint despite his win in a Randwick barrier trial 12 days earlier.

After the colt held up the start of the race to be re-shod, Michael Walker was positive out of the gates with Dubious sitting off Covert Ops ($11) as they turned for home.

The pair settled down to fight out the finish with Dubious getting the better of his rival by a short head.

“He was our most precocious colt,” Maher said.

“Shane McGrath from Aquis mentioned the idea. It’s a stallion-making race and that’s what we aim to do with this horse. So he’s started career very well.

“I’m just rapt to be able to win. If it’s history, that’s even better. Michael Walker does a lot of work for us at home also, so great for him to be on board.”

Maher said he intended to concentrate more on Sydney racing.

“You’ll” definitely see more of me in Sydney,” he said.

“I might leave Dave in Melbourne. That is the plan. We are looking to settle and grow in Sydney.”

Dubious has spent the past three weeks staying with Rosehill trainer Gerald Ryan, trainer of the runner-up.

“My bloke was brave,” Ryan said.

“He had to go forward otherwise he would have been stuck four-wide.

“The winner has been staying with us and he turned out to be the one to beat us.”

“Really good run, obviously just got picked up on the line, he’s got a very sensible race brain, little horse but gutsy effort.”

“He’s got a very sensible race brain,” he said.

“He’s only a little horse and it was a gutsy effort.”