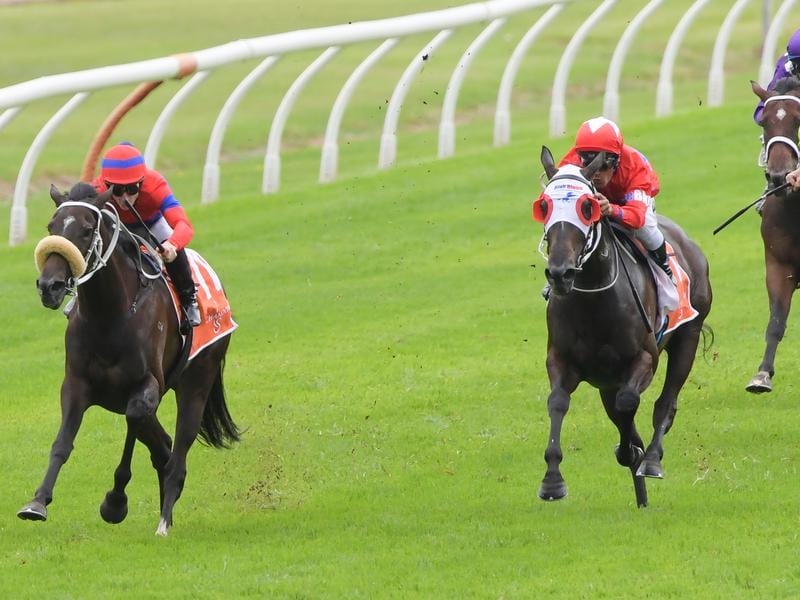 Fizzy filly Verry Elleegant has taken the next step to Classic success with victory in the Group Two Phar Lap Stakes at Rosehill, winning in spite of herself.

The three-year-old dominated the finish of Saturday’s 1500m-race, leaving Group One winners Seabrook and Aristia in her wake.

Verry Elleegant’s trainer Chris Waller fitted a nose roll to the filly but admitted that might not have worked while jockey James McDonald described her as awkward.

Awkward or not, she is certainly talented, putting 3-1/2 lengths on Champagne Stakes winner Seabrook with VRC Oaks winner Aristia another 1-3/4 lengths away.

The win came at her second start for Waller who inherited the filly from the Darren Weir stable after she went to the now disqualified trainer as a dual winner in New Zealand.

Waller said the Group One Vinery Stud Stakes (2000m) in two weeks would be the next step.

“How far she gets this prep I’m not sure, but obviously we will go a bit higher,” Waller said.

“There’s certainly room for improvement but she has got a lot of class.

“The Vinery seems logical, “She had a minor setback after her first-up run which was well documented so I guess she was a little bit fresh.

“Certainly she has got the ability there.

“She does race keenly and it’s not something you can change quickly,.

“We’ve got a nose roll on but it’s not helping so maybe we will take it off.

“We won’t worry about it today. We’ll just enjoy the win.”

McDonald said he thought a race run at a fast pace would suit the filly who had to contend with a heavy track on Saturday.

“She needs to relax better. It’s hard to explain – she’s awkward rather than being fierce.

“She just doesn’t give herself a rest. I think she just wants to go a bit quicker. Give her a fast-run race and you’d see something.”

Michael Walker and Damian Lane who rode the respective placegetters said both were pleasing as they head to the Vinery and the Australian Oaks.