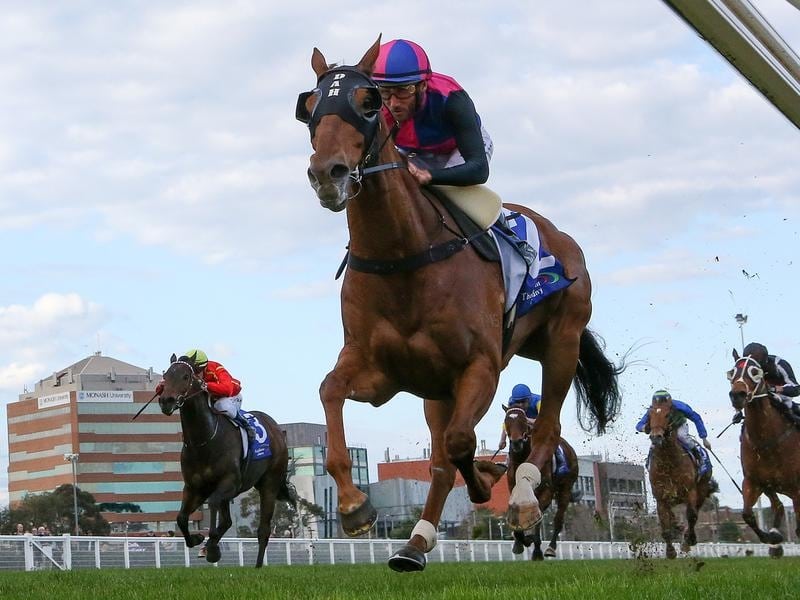 Vega Magic has made a compelling case for one of the remaining slots into The Everest with a dominant return victory in the Bletchingly Stakes.

Last year’s runner-up in the inaugural running of The Everest, Vega Magic has yet to attract the attention of slot-holders for this year’s $13 million race at Randwick in October.

“It’s great to see that he’s back to his best,” Hayes said.

“He’s a blockbuster sprinter on his day and he made some in-form, good horses look ordinary, I thought.

“He should have nearly won (The Everest) last year and he’s in form again.

“I’d be amazed if there wasn’t interest in him and my phone is ringing at the moment as we speak.”

Vega Magic wore blinkers in Saturday’s race, although Hayes said the gelding wouldn’t have the gear when he ran next in the Group One Memsie Stakes at Caulfield on September 1, a race he won last year before heading to The Everest.

However, the headgear will return if he gains an Everest berth.

Vega Magic is now unbeaten in three starts at Caulfield and Hayes wishes The Everest were run at the Melbourne track.

“I’ve often said he reminds me of Manikato,” Hayes said.

Oliver said Vega Magic over-raced in the early stages, which caused concern, but he was too classy for his rivals on top of the ground.

He said the only way the gelding could have been more impressive was if he’d settled early.

“He took a bit of harnessing early and I’m sure he would have accelerated a bit more if he’d settled,” Oliver said.

“He was getting tired late but I think that was because of wanting to overdo it early in the blinkers.

“Today he’s showed himself to be a top sprinter on top of the ground and if you’ve got an Everest slot you’d be foolish to look elsewhere.”