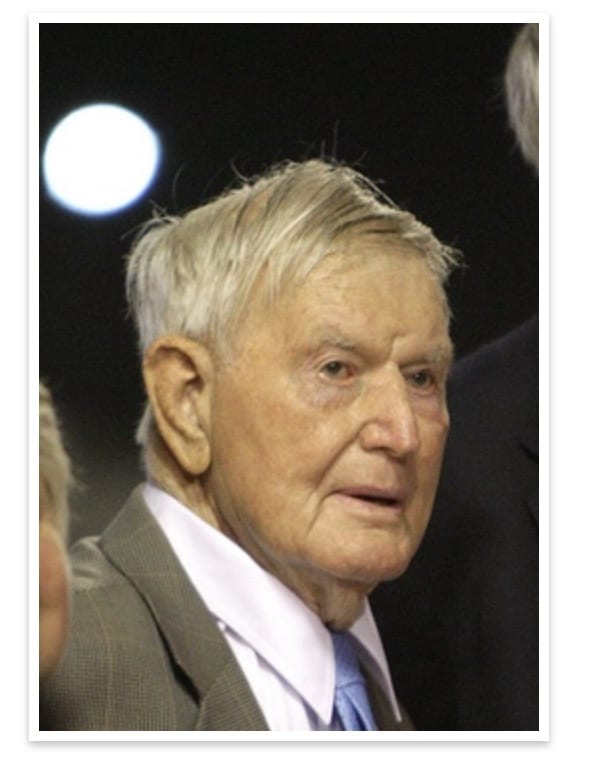 The last surviving founder of the New Zealand Thoroughbred Breeders’ Association, Charles Roberts, has passed away. In January 1948, Roberts at the time a very young veterinarian along with seven high-profile New Zealand breeders and businessmen joined together to canvas the establishment of a national association for breeders.

And, according to his good friend Ron Chitty, his last achievement on the executive was helping to persuade the moving of the National Yearling Sale to Auckland. “It took about 10 years of persuasion to convince them to bring the sales to where the people were,” Chitty said. “He was a great ideas man, ahead of his time and he was instrumental in importing a number of very good stallions into New Zealand, including Taipan II for Ron Manning at Tudor Bark and Zamazaan for Keith Burley at Carlyle Stud. He always bought the very best when it came to stallions, whether it was standardbred or thoroughbred. “He got a lot of people involved in the industry especially around Auckland and made sure they stayed in the industry. In those days we could drive around East Tamaki and pick up a truck load of mares to go to stud.”

Roberts was a successful breeder of both thoroughbreds and standardbreds and besides the outstanding pacers Adore Me, Christen Me and Dream About Me, he bred some top line thoroughbreds. These included the Group 1 Sydney Cup (3200m) winner Gallic, Group 1 Auckland Cup (3200m) winner Royal Sheen and Group 1 winners Fothers, Penny Edition and Beechcraft in partnership with Ron Chitty and Haunui Farm.

Roberts grew up on the family farm in Pigeon Mountain, an area of what is now the Auckland suburb of Pakuranga and studied to become a veterinarian at Sydney University and was soon specialising in large animals. Work at various vet clubs around the Waikato and Auckland and a stint in the United States followed before establishing himself in Otara and Ardmore amongst the various dairy, thoroughbred and standardbred horse farms, and it was as a veterinarian in these fields that he found fame.

Roberts was an innovator and a pioneer in the world of equine science. He was the first to introduce the swabbing of racehorses into New Zealand and was instrumental in the introduction of scanning pregnant mares. He was one of the first to recognise that mares didn’t get in foal when they were dirty, and his somewhat controversial and legendary method of dousing dirty mares with kerosene to get them in foal was later validated by science.

“Charlie had a reputation early on for getting mares in foal who were having difficulties, Surround and Savoir the best fillies of their era in Australia in the 1970’s their mothers were both not breeding and he was responsible for getting them in foal using the kerosene method,” Chitty said. “He was the first in New Zealand to scan for pregnancy and identify twins and crush them off. He bought one of the first scanning machines into the country and an Irish lass to operate it. She would scan at Tudor Park, Haunui, Ra Ora, and Burley’s then hop in a small plane at Ardmore – she didn’t have a driver’s licence – and fly down to the Waikato and scan mares there.

“His thoughts on feeding horses were advanced. He had always believed there would be a time when a composite mix was available for feeding horses of various ages and used to sell a calcium phosphate mix that he prepared in an old concrete mixer. He seemed to know what the problem was in young horses and he didn’t need science to tell him, as it came to pass it was an important part of feeding a horse.

“Another field in which he was ahead of his time was in dairying. He had the best two herds of Friesian cows in the country, which he developed from imported American semen. They were magnificent and the main bulls in the AI centre were bulls from Charlie’s breed. “He was a fantastic worker and a very smart man. He would work all day in his vet practice and then go and work all night on the hay baler. He was very good to Mark when he started and instilled in him a great work ethic and that is what you need in a good vet.”

Mark Chitty’s first recollection of Charlie Roberts was an 11-year-old boy when he went to stay with his Grandmother at Haunui Farm in Whitford, and he too remembers how hard he worked and how important hard work was too him. “I was allowed to spend the day doing the rounds with him in his car,” said Chitty, who years later worked for Roberts at his Auckland Vets practice before returning to work on the family’s stud farm. “I have a great number of memories, we all knew it was inevitable but still it is sad when it happens, when I was told he had died I was working at the time, and it would have pleased him I was working.

“He instilled in all his young vets you can’t treat an illness or injury until you have a diagnosis and he really stressed that you got that right. He was really fierce in determination to find out things and I was witness to many gory post-mortems in the interests of identifying problems. “He had the respect of veterinarians all around the world, that was the mark of the man. “I admired the fact the he was very forthright and had an opinion, and he loved to challenge people’s opinions, he was prepared to change, and he wasn’t afraid to make a decision.”

It was in his latter life that Roberts really excelled as a breeder of standardbreds with the establishment of the successful Woodlands Stud. He was inducted into the Harness Racing Hall of Fame and was also named Breeder and Owner of the Year in that code.

And Ron Chitty recalls the determination and single-mindedness of Roberts when he decided to focus his attention on his harness passion. “He was in trotting before he was in galloping and he came to us one day at Haunui and said, I want you people to stand a trotting horse. And our reaction was you can’t stand a trotting horse here they do AI. We can’t be working off the same premises,” Chitty said.

“So instead he said I’m going to buy that property on North Road, and off he went and told his bank manager he wanted to buy the property, and when the bank manager asked him how he was going to pay for it he said that’s your job. That was the start of Woodlands Stud. “He ran things his way. He was a great man, but if you fell out with him, and a few did, you fell out forever.”