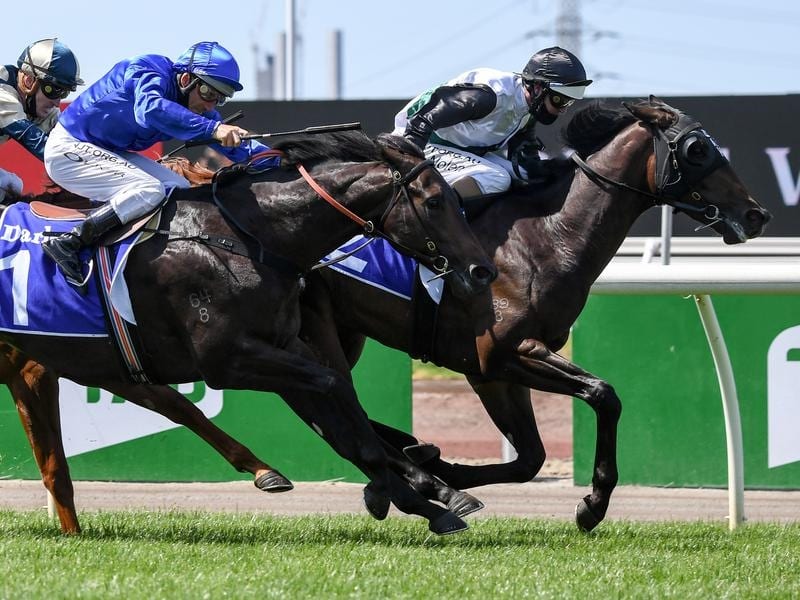 Lindsay Park has continued its winning ways in the Group Three Maribyrnong Plate at Flemington, taking it out for the second year in a row, this time with Finance Tycoon.

While last year’s winner Hard Landing was prepared by the trio of David Hayes, Ben Hayes and Tom Dabernig, the former’s departure to Hong Kong has left a new-look team of two.

Ben Hayes said it was an event the stable liked to target.

“It is a race that dad (David) used to love and it’s nice that Tom and I have been able to win it as well in our first year out of the partnership with dad,” Hayes said.

Hayes said the addition of blinkers to Finance Tycoon had made a difference as he had got a bit lost down the straight at his debut.

“We jumped him out at the farm with the blinkers on and he went well and we thought why not try it? Obviously it worked,” Hayes said.

Hayes said the $120,000 first prize would help the son of Written Tycoon gain a start in feature two-year-old races including the Magic Millions on the Gold Coast.

The trainer gave jockey Luke Nolen “a ten out of ten” for his ride on Finance Tycoon.

Nolen was dislodged from the colt after winning the race but was unharmed and walked back to scale.

The jockey said the addition of blinkers and the experience of having had a race start had made a difference to the colt.

Finance Tycoon ($8) defeated Ingratiating ($1.85 fav) by a half-neck with Marine One ($5) three lengths away third.

It was Hayes and Dabernig’s second winner for the carnival with the other one, Crosshaven, taking out the first race on Saturday.

The stable took their tally to three when Sin To Win triumphed in the Macca’s Run (2800m).