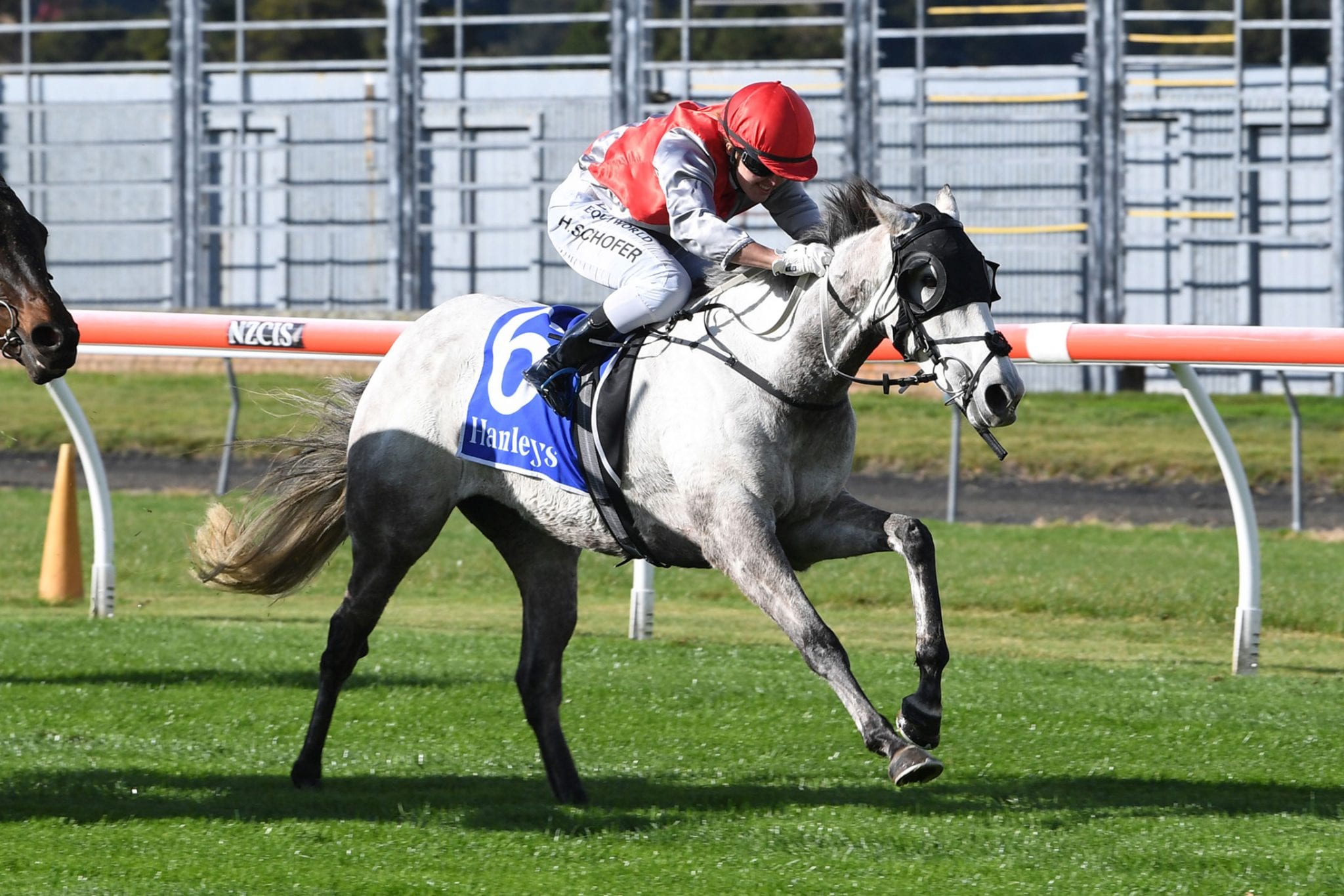 With one horse prone to running off the track and another that tries to eat her, one might question why Susan Rainford bothers with racehorses as she nears 80 years of age.

But the Taranaki horsewoman’s two runners this season, Sidebar and Lois Lane, are helping her enjoy her “retirement” to no end.

“I wouldn’t call it a ‘hobby’ because there’s some quite substantial costs, but I find it gets me out of bed in the morning,” she said.

“If you stay in bed too long you’ll fade away.”

Sidebar in particular has been kind to Rainford. She scored her fourth victory, and second this season, when leading all the way to win a Rating 74 contest over 1600m at Trentham on Saturday.

Rainford had one major criteria when she bought Sidebar, whose dam is the Flying Spur mare Barbette, for NZ$5,000 at the 2017 New Zealand Bloodstock National Yearling Sales.

“I wanted a grey horse because all the bays and brown horses look the same to me when they’re racing,” she said.

“She was pretty small but I liked the Flying Spur side of her pedigree.”

Now five, Sidebar has required a lot of time and patience.

“She’s been banned twice from racing for running off the track,” Rainford said. “She’s needed a stronger rider and Hazel Schofer has been great for her.”

Rainford’s regard for Schofer was so great that when she was due to return to racing on May 13 – her first start in more than six months – she decided to run Sidebar over 2060m in a race Schofer was available at Whanganui rather than take a chance with another rider over a shorter trip.

It paid off when she led all the way to win that race, and similar tactics were employed for Sidebar’s victory at Trentham.

Rainford was unsure where Sidebar would head next, saying she’d stick to her grades in the meantime before deciding to take on better company.

Rainford’s other runner this season has been Lois Lane, who has raced five times for a second and two thirds, a fourth and a fifth.

“My track rider says she is as fast as any horse he’s ridden for me, but she has always been slow out of the barrier, which doesn’t help,” she said.

“She’s a very promising horse but she’s got some bad manners around the stable – she tries to eat you. It shows a bit of aggression, but she lines the opposition up at the barrier so I have to tell the riders to keep well away from the others.”

Lois Lane will try to break her maiden over 1300m at the second Cambridge synthetic track race meeting on Wednesday.

Rainford has prepared a couple of horses for the past 30 years, and is best-known for her homebred mare Just Apollo, whose five black type victories included twice winning the Group 2 Auckland Thoroughbred Breeders’ Stakes (1400m) – a feat matched only by Sunline.

Just Apollo, who Rainford said “paid our mortgage”, was also Group One-placed in the 1994 Avondale Cup (2200m) and finished a creditable seventh in the 1995 Cox Plate, about four lengths behind Octagonal.

“We’d never been to Australia before with a horse, and we decided to tackle the best weight-for-age horses there. That was an experience,” she said.

Rainford bred a number of winners from Just Apollo, the best of which was the four-time winner Ceejay, and she has a rising two-year-old Sweynesse grandson of Just Apollo’s in the stable now.

“He’s the last of the line from Just Apollo. He probably won’t make a two-year-old but he’s the nicest horse I’ve ever bred.”