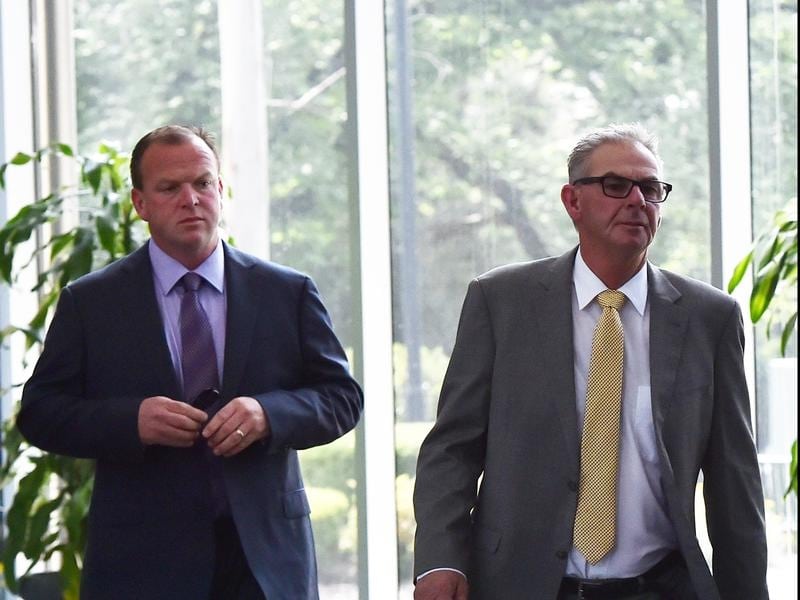 Trainer Shannon Hope admits he lied during his cobalt case but denies cheating by giving horses supplements on race days to enhance their performances.

Hope and his father Lee have pleaded guilty to a lesser charge of administering a prohibited substance as they fight their cobalt disqualifications, blaming their feeding and supplementation regime for an inadvertent administration.

Hope admitted he lied to the racing tribunal that banned him for five years and his father for three years for intentionally administering cobalt to affect the performances of three horses in 2014 races.

He told the Racing Appeals and Disciplinary Board that after Victoria introduced a cobalt threshold in April 2014, he checked the labels on products the trainers used.

The 42-year-old on Monday admitted he never checked the products.

Hope said he thought saying he had checked would help after “harsh” questioning of his father at the 2015 hearing.

“It was stupid. I’ve regretted it ever since,” he told the Victorian Civil and Administrative Tribunal.

Racing Victoria barrister Jeff Gleeson QC, who had accused Hope of making things up at the time, suggested the trainer was still lying.

“You’re trapped in this lie and you’re troubled by the fact that you’re potentially bringing your father down with it,” Gleeson said.

Gleeson also said: “You didn’t think it was such a big cheat to inject commercial supplements on race day. You knew it was wrong but you thought you’d get away with it and you’d do it anyway.”

VCAT heard RV analysis showed only 21 of 1650 race day urine samples over April 2014 to May 2015 returned cobalt levels over 100 micrograms per litre, which was less than the 200 microgram threshold originally imposed.

Ten of those 21 horses were trained by the Hopes, Gleeson said.

RV maintains the trainers are guilty of the more serious charge of administering cobalt to affect a horse’s race performance, contending it was to make the horses run faster for longer.

The Hopes’ barrister Rahmin de Kretser said the defence case was there was an inadvertent administration that led to the cobalt threshold being exceeded.

The Hopes denied the horses were given supplements and medication in addition to the treatment and feeding regime they disclosed to stewards.

Lee Hope said he did not see the need to change anything when the cobalt threshold was introduced.

“I didn’t do anything because I thought the cobalt was in a bottle with the word on it and we weren’t using it,” he said.

He said they did not alter the feed and supplements program after being told about the cobalt positives as they felt they had done nothing wrong, but later made changes under a new vet.

VCAT heard the Hopes otherwise had unblemished records as licensed persons in racing – Lee over more than 50 years and his son for 28 years.