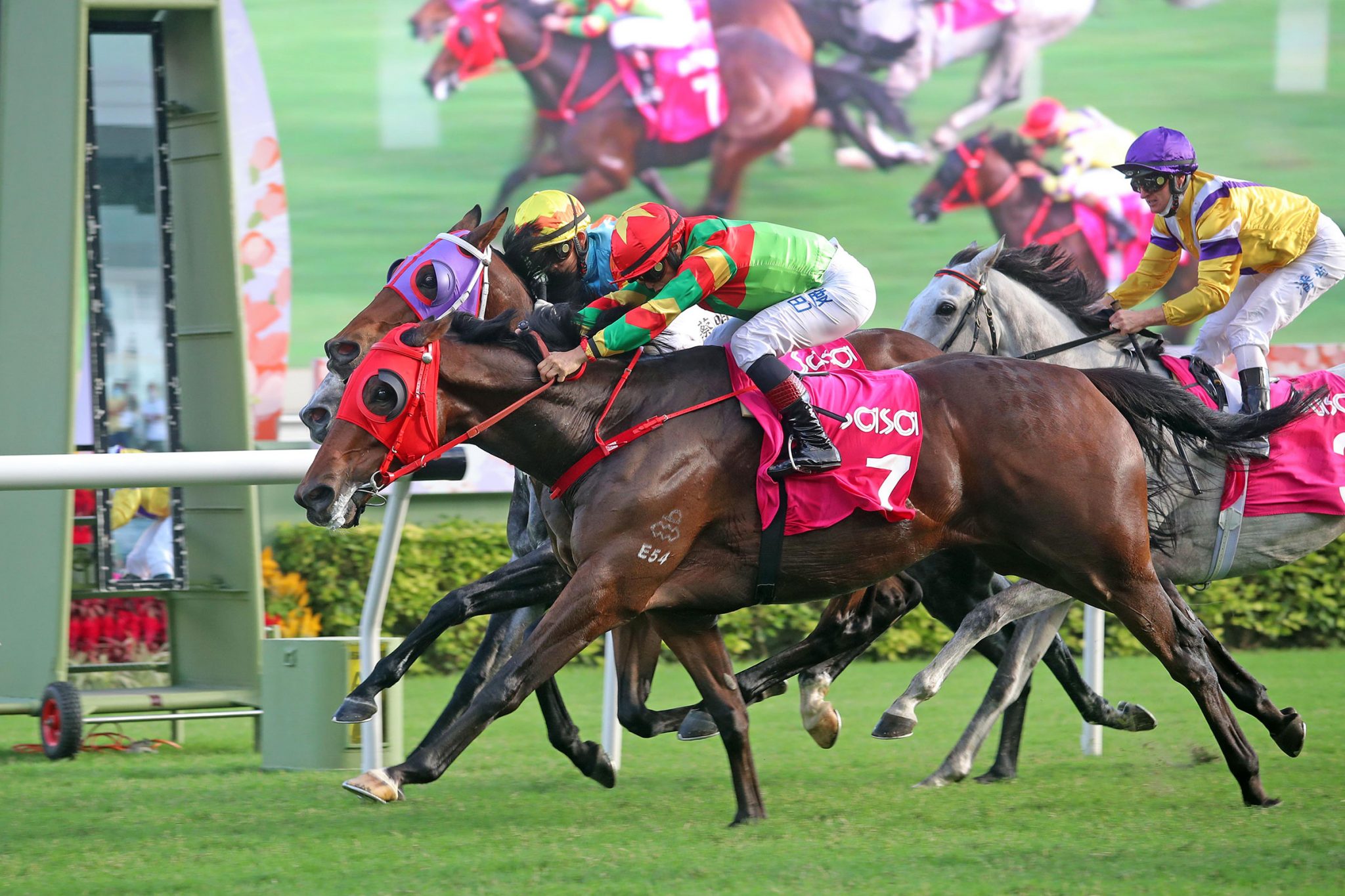 Delighted to have claimed a second Hong Kong win with the gelding who finished third in the 2020 Group 1 Australian Derby (2400m) as Eric The Eel, Shum indicated Tourbillon Diamond was best suited at Group 2 level.

“I think he is ok in Group 2 under handicap conditions but set weights is very difficult, we will see how we go,” Shum said after Alexis Badel drove the five-year-old to a short head win over Ka Ying Star and Reliable Team.

“Of course, I’m very happy, he’s a very consistent horse. This time he (Badel) dropped him in a little bit and got cover and he ran better.”

“I had a very good race, it was smooth, and I gave the horse the chance to breathe and recover from the early part of the race and then he gave me a great turn of foot and he was very good to the line.

“He’s finally got back to his best form – 113 pounds in the handicap is a big advantage and I’m lucky I’m light and can pick up rides like this.”

Badel moved into fourth place on the jockeys’ championship with 14 wins for the season to trail only Zac Purton (29), Joao Moreira (21) and Karis Teetan, who also has 14 triumphs but more minor placings.

Sent off as a -1000 favourite to extend his unbeaten record to three, Nervous Witness was under pressure at the 350m mark as Cordyceps Six went through his gears before surging to a two-length margin over Run Run Cool. Nervous Witness was a further half-length away.

“We kind of spoilt the party with the favourite, I’ve seen very few horses at that price since I’ve been in Hong Kong,” Gibson said.

“You’re never confident against a horse that’s -1000 favourite – we’ve been reading great things about the favourite for a long time, so to win so easily it’s a feather in the horse’s cap.”

David Hayes immediately inspected Nervous Witness before saying: “Zac (Purton) said he felt lethargic when it was time to go, maybe the gut buster took more out of him than we thought. I’m in a bit of a state of shock.”

Frankie Lor credited stable team-work and the ability to access dual training sites – Conghua and Sha Tin – after taking the lead in the trainers’ championship following Peak To Peak’s success in the first section of the Class 4 Eleanor Handicap (1400m) under Vincent Ho.

“The teamwork in the stable is really good. Also being able to move horses between Conghua and Hong Kong. I’ve always said that if the horse is healthy, you can do everything,” he said.

Ridden by Badel, Trillion Win charged along the fence as Moreira descended wider on the track, while Purton – a nose away third on Lucky More – staved off Vagner Borges’ Czarson for the minor prize.

“I thought I was third, I wasn’t sure if I could pass Zac on the line because obviously it was very tight and I wasn’t sure about Joao, neither,” Badel said.

“I didn’t want to lead the race but the pace wasn’t fast enough to get some cover and be smooth, so I decided to hold my spot on the inside and tried to stay there as long as I could because he looks around when he hits the front.

“I think he could have won a little bit better. He’s a very nice horse.”

Now a winner of three successive Class 2 contests this season, Trillion Win improved his overall record to four victories and three minor placings from 11 starts while Fantastic Way, a son of Swiss Ace, also has four victories in Hong Kong, but from only six starts.

Paul O’Sullivan celebrated his first victory of the campaign when Snowalot – a standby declared runner – made the most of Awesome Treasure’s scratching to claim the Canmake Toyko Handicap (1200m) for Purton.

“He’s the first new horse we’ve lined up this season, he showed plenty in New Zealand before he came up here – we bought him as a yearling,” O’Sullivan said.

“It’s very good to get on the board. It’s really good, promising horse. He can win again. Very pleasing.”

Lor believes Infinite Power can acquit himself successfully in higher grades after forging to resolute success in the second section of the Grace One Handicap (1400m) under Matthew Poon.

“He’s a big-striding horse and as you saw when Joao Moreira’s horse (Mega Bonus) came up to him in the finish, he was able to find more. He did a good job today from the draw (barrier 12) and I think he can run well again up in Class 3,” Lor said.

Champion trainer in 2019/20, Yiu notched his third win of the season with Darci Joy, ending a run of eight second placings since the stable’s success with Golden Link on 10 October.

Hampered by a string of leg injuries, seven-year-old Super Kin broke through at his 20th Hong Kong start for Caspar Fownes and Badel for victory in the Class 5 L’Oreal Paris Handicap (1600m).