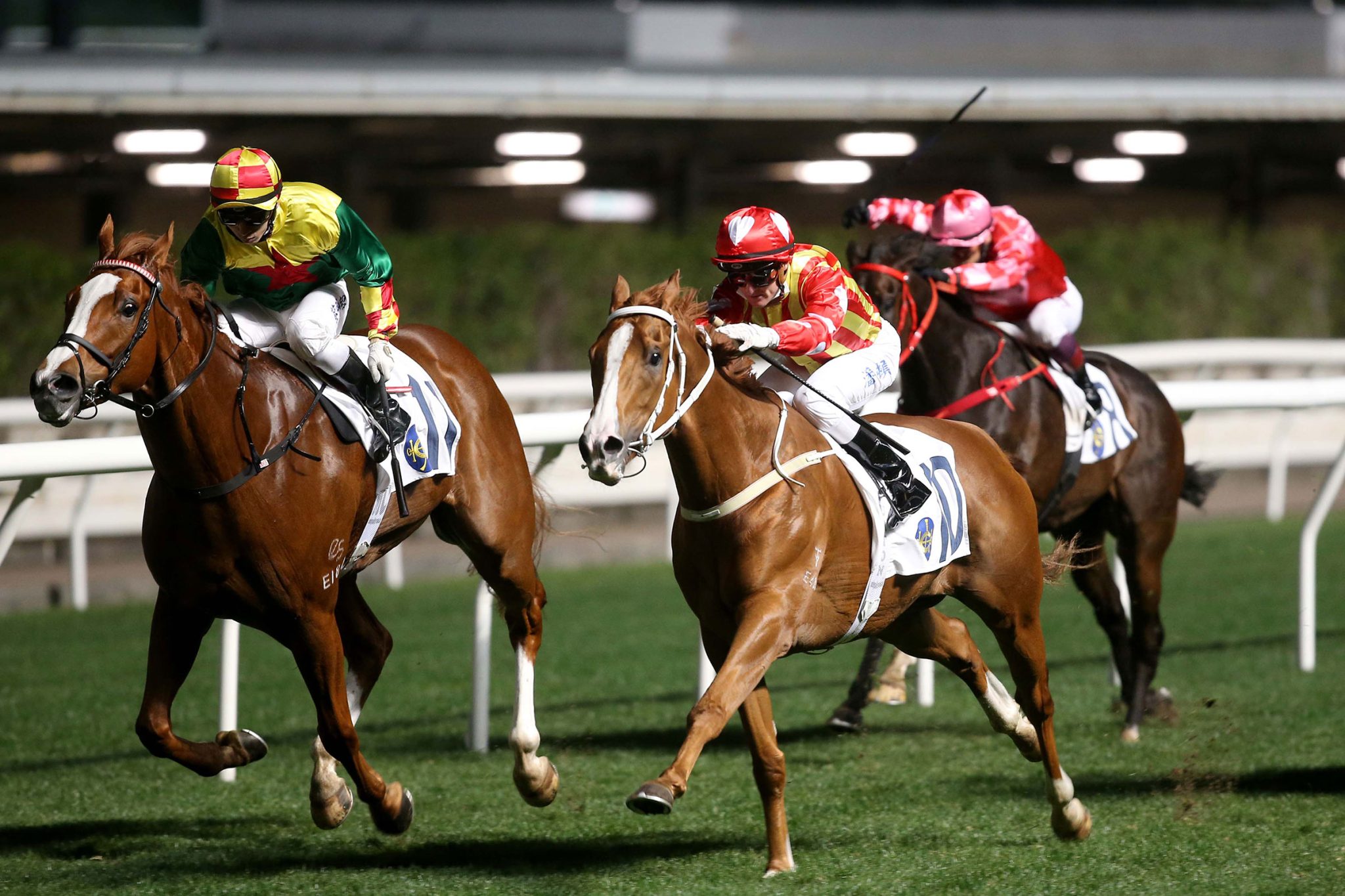 Cruz will saddle California Spangle and Ima Single Man in Sunday’s feature armed with vital impetus after revelling in a three-timer – in successive races – at the city circuit Wednesday with More Than Enough, Circuit Booming and Circuit Seven.

The haul boosted Cruz’s tally for the season to 30 wins to trail only Frankie Lor (42) and John Size (39) in the battle for the trainers’ championship.

Stoltz delivered a measure of solace for Francis Lui in the wake of Golden Sixty’s Group 1 Stewards’ Cup (1600m) defeat by smashing Happy Valley’s five-furlong course record with a blistering display in the Class 3 Babington Handicap (1000m) under Zac Purton.

“The last two runs, after the race the jockey (Matthew Poon) told me when he hit the front, he just waited and looked. That’s why we just put the cheek pieces on,” Lui said.

“This horse is actually easy to ride and he can sit in a good position. Zac did a good job.”

Lui said Golden Sixty had recovered well from his defeat to Waikuku on Sunday (23 January) and would trial before the trainer makes a decision on his next assignment on 20 February – either the Group 1 Queen’s Silver Jubilee Cup (1400m) or the Group 1 Citi Hong Kong Gold Cup (2000m).

“He seems okay. After the race, he seems the same. He’s healthy,” Lui said. “I will give him another barrier trial before I decide on his next run.”

John Size and Brazilian Vagner Borges combined for their 11th success of the season when Leap Of Faith nosed out Maldives in a stirring finish to the Class 3 Conduit Handicap (1650m).

Only Joao Moreira, with 19 wins this term, has been more successful in tandem with Size in 2021/22.

“He hasn’t been the easiest horse to contend with, we’ve worked out that he probably wants to be ridden a bit quieter,” Whyte said. “And he’s got a turn of foot, which you’ve seen tonight.

“He does give myself and jockeys a false illusion that he wants further and that he’s one-paced and they’ve tried to ride him like that and unfortunately it didn’t suit him.

“I told Jerry to ride him more conservatively tonight and that was the winning move.”

“The draw made all the difference and Matthew rode a good race,” Man said.

Chadwick completed a double aboard Frankie Lor’s Rewarding Together when the Pierro gelding notched his second win in a row with a powerful close to the Class 3 Breezy Handicap (1200m).

“I’m just being able to get on better horses and stay on them,” said Chadwick, who has 25 wins for the season. “I feel like my confidence is a bit higher and I can produce a bit better.

“I’ve just been knuckling down and doing the homework and it seems to be paying off.”

Karis Teetan credited Tony Cruz’s conditioning of More Than Enough after the gelding’s front-running triumph in the first section of the Class 4 Lyttelton Handicap (1650m).

“He just kept finding, Tony and his team have done a great job in getting this horse really fit,” Teetan said after notching his 27th win of the season.

Happy Jai Jai made it two wins on the bounce for Benno Yung and Joao Moreira, streaming to a four and a quarter-length victory in the Class 5 Pok Fu Lam Handicap (1650m).