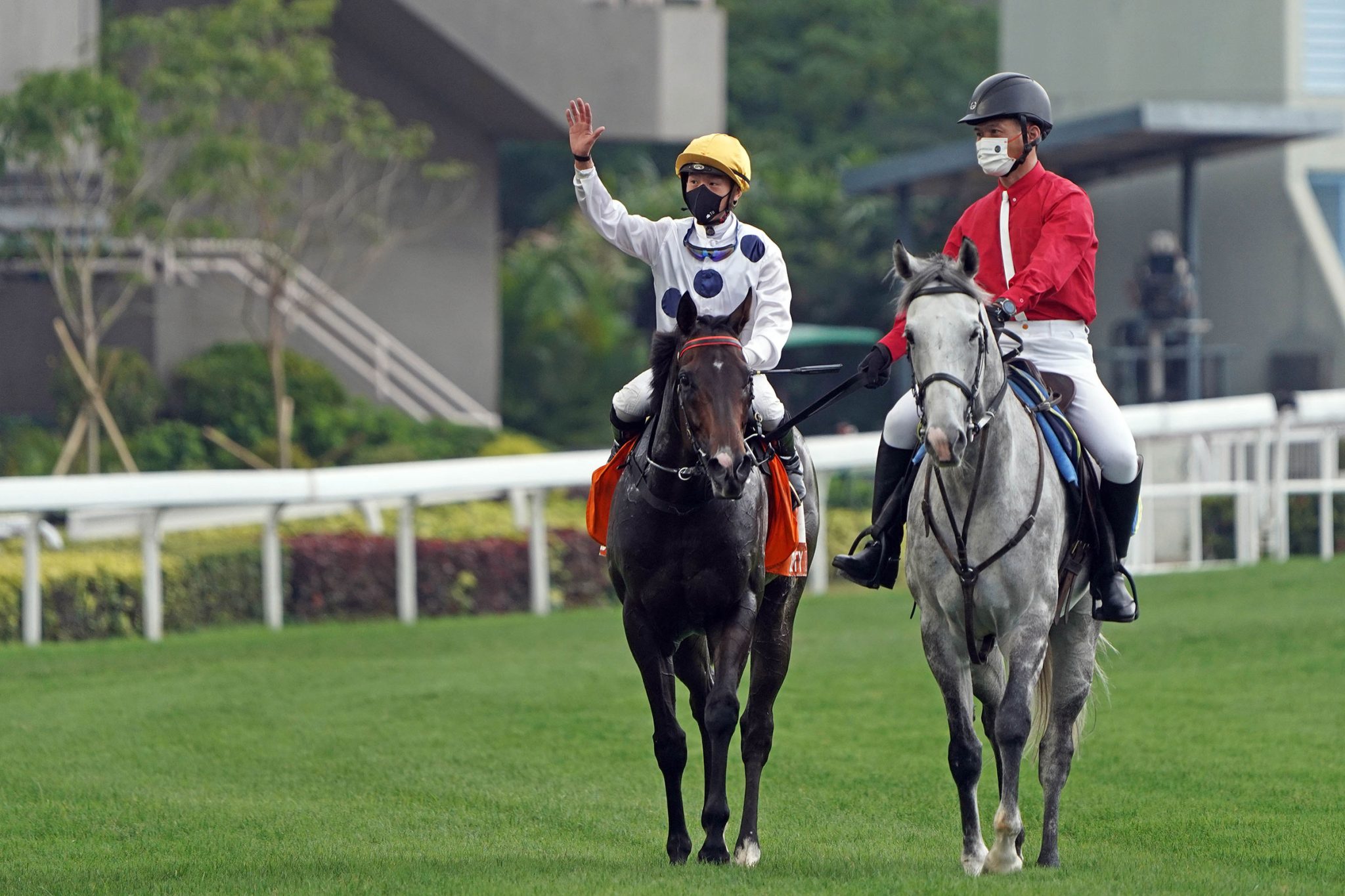 Declaring Golden Sixty in peak condition as he bids for historic success in the Group 1 FWD Champions Mile (1600m) at Sha Tin on Sunday (April 24), Vincent Ho and Francis Lui believe the outstanding galloper is perfectly suited by an inside draw in the HKD$20 million feature.

“We’ve got a good draw and obviously there should be two or three horses that will have some good pace. Draw two is perfect for us and we can just track up to them and run them down in the straight,” Ho said.

“He’s 100 percent. He’s right on track and fitter than last time. He’s always got the fighting heart. Since last start, he’s brought on his fitness more and we’re confident going into this race.

“Every time on him is a privilege and to win on him is definitely something really special – words can hardly explain but every time there are goosebumps and every time is different.”

“California Spangle is a very strong opponent, he’s young and he has good speed. But barrier two will help Golden Sixty position himself in a very good place so he doesn’t have to chase from too far back and hopefully he will win it again,” Lui said.

To be ridden by Zac Purton, California Spangle will jump from gate five but has Healthy Happy – another front-runner – drawn in barrier four.

“This will be his toughest race ever because he’s running with the champion horses, all the good horses are in. It’s a strong field,” Cruz said. “I think the mile is perfect distance for him. I believe he is still improving and I believe if he gets his own way, he’ll run a big race. Healthy Happy is the only horse that can spoil the race for us.”

“Taking on Russian Emperor is a tough race for him, he is a very good 2000m horse, but we have still got a chance,” Shum said after the Hong Kong International Sale graduate drew gate four. “I think this race is the right choice. I’m really looking forward to the race, I’m very happy and really confident he can run a really good race.”

Teetan said: “It’s going to be a totally different race to the Derby, He’s going to be taking on stronger and more experienced horses. We have a lot of respect for Russian Emperor. “From my draw I know I won’t have to use him too much. I can save some petrol into the first turn, put him to sleep and let him give us his best in the straight.”

“He’s back to his best distance, he’s in good form and I believe he’s the class runner in the field. If everything goes well, hopefully his class will prevail,” Shinn said.

“The barrier is great. I haven’t spoken to Douglas yet. We’ll analyse the field and I can’t say exactly how I’m going to ride him. I’ve ridden him pretty similarly his past couple of starts and I don’t think we’ll change too much. We’ll ride the race as we see it.”

“We’re comfortable with barrier six,” Shinn said. “We’ve got options to ride him basically wherever we can. I just think it’s the perfect spot. We can dictate to where we want to be and that’s going to give us every chance to give the horse the best possible chance of winning.”

Wellington seeks to defend his crown under jockey Alexis Badel as Richard Gibson declared the All Too Hard gelding a better horse than last season.

“He’s a stronger animal than he was last year and mentally he’s the ultimate professional,” Gibson said. “We’re looking forward to the challenge on Sunday.

“People are reluctant to assume favouritism but I don’t think it’s over-confidence – I do think all the other jockeys in the race will be thinking Wellington is the horse to beat. We’re very happy with where we’re at with his condition.”