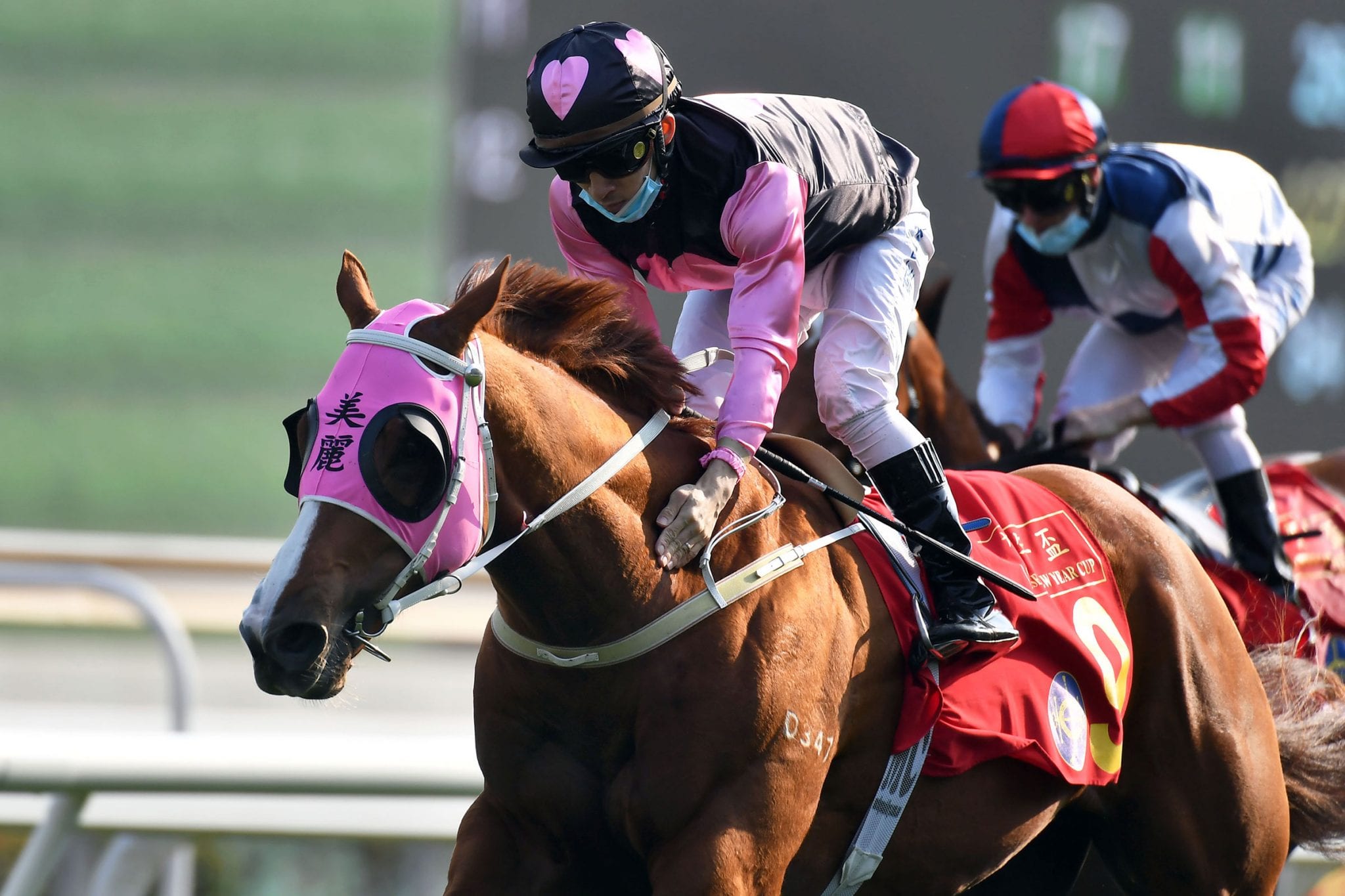 Contesting only his ninth start in Hong Kong, the chestnut was given a superb ride by Cruz’s former apprentice Matthew Chadwick to effortlessly bridge the rise from Class 2 company and extend his winning streak to two.

A Listed winner over 1400m as a two-year-old when he raced as Justifier for Ger Lyons in Ireland, Beauty Smile took seven starts to break through in Hong Kong but, after a sizzling Class 2 win over 1400m at Sha Tin on 31 January, Cruz was full of optimism pre-race.

“We came with a lot of confidence, just stepping up (in class) and all that,” he said.

“We were very confident. I thought it would be a stable quinella. I’m very disappointed with the other horse (California Rad, who finished seventh) – maybe there was something I missed with him.

“But I was also very confident with Beauty Smile.”

Cruz, who remains in contention for the trainers’ championship after moving to equal fourth with his 34th winner behind Caspar Fownes (43), had a simple explanation for Beauty Smile’s (113lb) emphatic success.

“He rode a perfect race, he’s riding with confidence now, especially on this horse now,” said Cruz, who previously won the Chinese New Year Cup with in 2013 with Penglai Xianzi.

Chadwick finished with a double after piloting Trust Me to success in the Class 3 Good Fortune Handicap (1200m) for Dennis Yip.

The bonus is available to owners of horses who win a Class 2 with a minimum rating of 80 before the age of five. Wellington, who improved his record to five wins from seven starts, was rated 90 pre-race.

“We were up against some very horses today – at one stage, it looked like he was going to win the race very easily and then he was tiring in the last 50 (metres) but it was still an excellent performance,” Gibson said after Wellington (127lb) denied a charging Duke Wai (125lb) by a short head.

“We always thought he would be better today, second-up in trip and getting some work into him – he’s been off for so long – he needs the work.”

Gibson makes no secret of his admiration of Wellington’s ability.

“These are the horses that get you out of bed in the morning,” he said. “You don’t need an alarm clock when you’ve got Wellington.

“He’s given me plenty of headaches along the way, but I’ve enjoyed the ride.”

Gibson said an FWD Champions Day start for Wellington was a “good possibility”.

Purton sealed a double in the last of 11 races aboard Super Football in the Class 3 Kung Hei Handicap (1600m) for Jimmy Ting to move to 61 winners for the 2020/21 season – 28 fewer than Joao Moreira, who is serving a two-meeting ban.

David Hayes counted his good fortune after Fantastic Treasure, originally a standby runner, capitalised brilliantly on being promoted into the field for the second section of the Class 4 Kut Cheong Handicap (1200m) to win on debut.

A son of Written Tycoon, the three-year-old was given an excellent ride by Chad Schofield, who described the gelding as having “nice attributes.”

“It was a nice win,” Schofield said. “He’s got good ability and he’s still learning – he should make a nice horse.”

Hayes, who said he had “strategically check-mated” himself with the number of young horses he has in his care, predicted the Australian import would develop into a “classy miler.”

“It’s great to win on any day, but to win for the owners – even from barrier 13 – at the Chinese New Year races is great,” he said.

“I’ve got a lot of horses like this one – I’ve just got to be patient and let them develop.”

Hayes posted his first double since the season-opening fixture (6 September) when Master Montaro returned to form with strong victory in the Class 4 Great Profits Handicap (1400m) under Vincent Ho.

“First time at 1400m, blinkers off and Vincent rode him a treat,” Hayes said.

“He’s a bit of a slow learner, so I think he’ll get better with racing.

“I think he’ll go up in class – he won’t go crashing through with five wins in a row – but he’ll get there because he’s got the big engine and good constitution and I think he can run a mile, which is another string to his bow.”

Ho also landed a double when Decisive Twelve broke through to claim the first section of the Class 4 Kut Cheong Handicap (1200m).