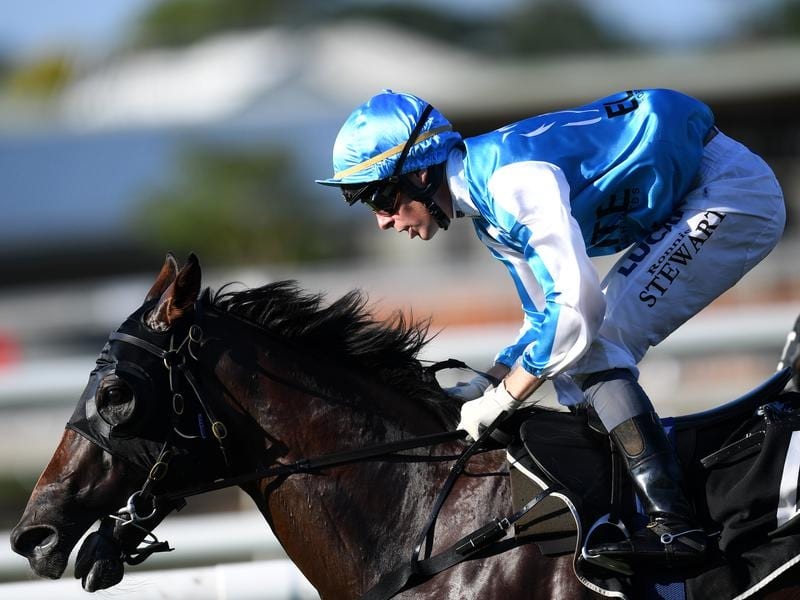 The race was delayed by 30 minutes when apprentice Clayton Gallagher was thrown from Hard Stride on the way to the barrier after the horse bucked.

Gallagher was treated on the track for 15 minutes before being taken to hospital with lower back pain.

He was transferred to Brisbane’s Tony Gollan last year and won at Caloundra for the premier trainer.

Gollan sent him to Dalby for the Lightning over 800m at his first run back from a spell and he won running 44.10, believed to be the second fastest 800m run in a race in Australia.

Gollan was in Sydney but stable foreperson Holly Wiliams said Straturbo was a stable favourite.

“He is the oldest horse in the stables but a real gentleman,” she said.

Trainer Kelly Doughty has been saying for the past two years she could hardly wait for the return to racing at Eagle Farm for her mare Benfica Princess.

Benfica Princess ($13) took her record to five starts at Eagle Farm for three wins when she stormed home late to beat Red Colours ($51) by a nose with a nose to Francisca ($4.80) in the Prostrate Cancer Australia Handicap (1500m).

“I don’t know how many times we said over the past two years we wished her race had been at Eagle Farm,” Doughty said.

“I didn’t think barrier one today would help her but she has a big heart. There might be a half decent race for her in the winter.”

“I think he has a real future. It is great because he is raced and bred by some of my biggest supporters in the Harvey family,” Sears said.

“Also I was happy to give (jockey Emma Ljung) a city winner because since she came out of her apprenticeship she has been doing a lot of work for me.”