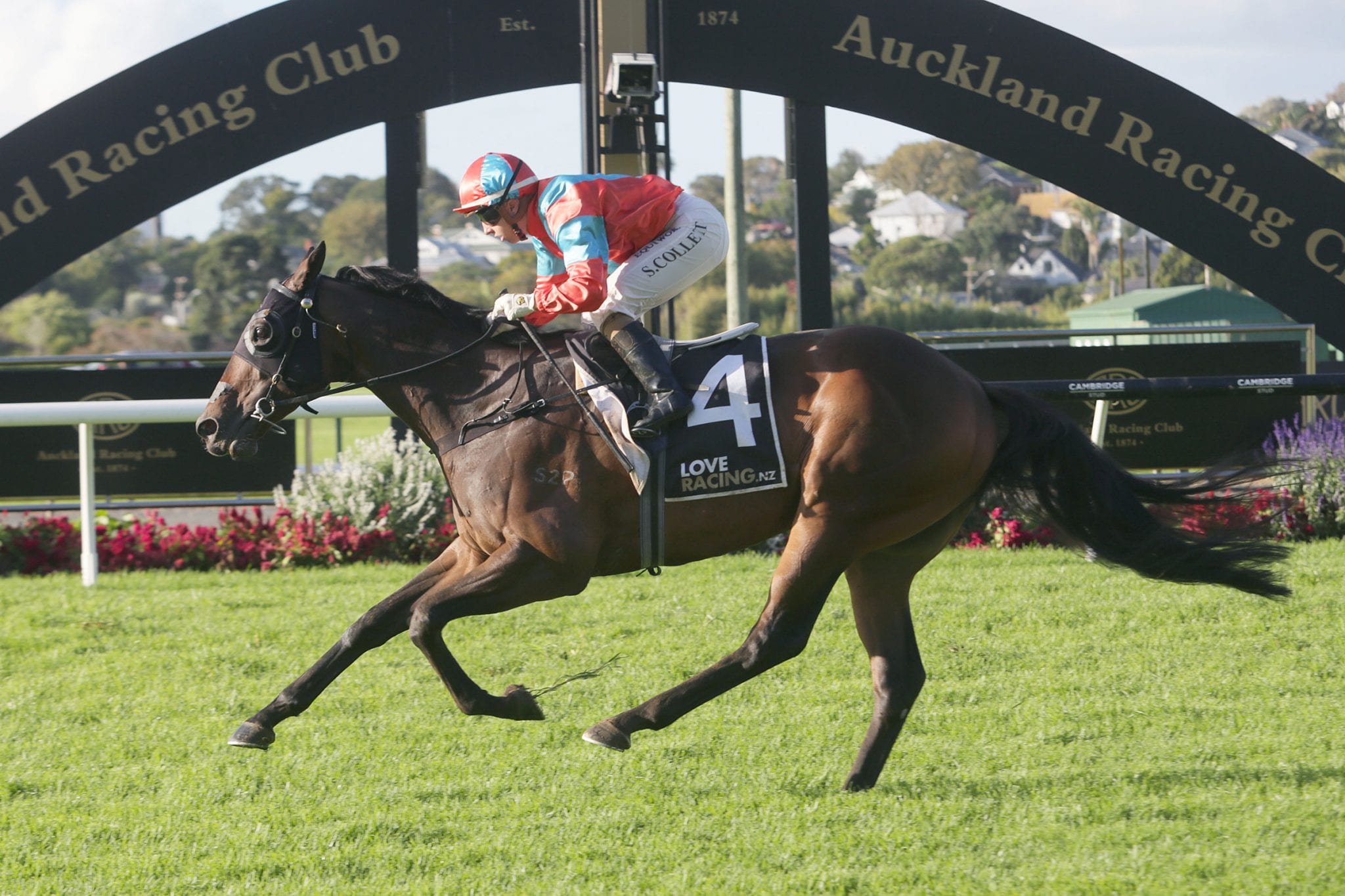 Tiley had a big team engaged on the day and was delighted to leave the course with a pair of stakes victories, including the Easter Handicap, a race that he had set Demonetization for after he had run second in the Group 2 Rich Hill Mile (1600m) at the venue on New Year’s Day.

“My rain dance during the week obviously worked out well,” Tiley said.

“He (Demonetization) just loves it when he can get his toe into the ground and I knew when the track came up a Slow9 he would be very tough to beat.

“We set him for this after he had run second in the Rich Hill Mile as you can only get one good run from him on good ground.

“We put him away and brought him along patiently and gave him just the one lead-up run.

“I had said to his owners that he would win the Easter and to take whatever odds they could get when the Fixed Odds market came out, so I’m sure it was a pleasing result all around for everybody.”

Rider Sam Collet spoke with regular pilot Leith Innes, who was unavailable to take the mount and followed his advice to perfection, settling the son of All Too Hard towards the rear before making a sweeping run at the leaders approaching the home turn.

Demonetization let down with a powerful sprint in the tricky conditions to race past a gallant Hasabro, who fought on strongly to take second with Marroni battling on strongly for third.

“Sam rang Leith and he told her to ride him anywhere he was comfortable but to make sure she got the last run at them,” Tiley said.

“He can tend to button off when he is on his own, but she timed it beautifully and he was very strong at the end.

“He can go in the paddock now as he is a terrible traveler, so there is nothing around for him up here.

“We’ll bring him back and set him for a good race later in the spring.”

Demonetization has now won seven of his 27 starts for owners, the N & P Balia Family Trust, including the Group 2 Auckland Guineas (1600m) as a three-year-old.

Well-related filly Lady Maroal had earlier in the day overcame an extraordinary mid-race incident to claim a valuable black-type victory in the Listed Staphanos by Deep Impact Champagne Stakes (1600m).

As the nine-horse field approached the 600-metre mark, two track maintenance workers were standing on the course proper directly in front of them. The pair dived under the running rail and out of harm’s way in the nick of time, but every runner was forced to take some degree of evasive action and was badly inconvenienced.

The siren sounded soon after the race and a long inquiry followed, and there was even speculation that the race could be ruled null and void. In the end the results were allowed to stand, with the exception of the fifth-placed Te Poropiti, who was declared a non-runner.

“Obviously there was a bit of drama mid-race, and it’s a relief that the result stood,” Tiley said.

“I didn’t even know what had happened at the time – I just heard the siren after the race and assumed it was nothing to do with us, because those two horses were out in front together for most of the way.”

Lady Maroal and Atullibigeal soon put the alarming incident behind them and set down to fight out a memorable battle to the finish, with Lady Maroal tenaciously gaining the upper hand late in the piece to score by a head. The first two finished more than three lengths ahead of the distant third placegetter Nest Egg.

The Champagne Stakes was the second win in a four-start career for Lady Maroal, who won at Pukekohe last month before a creditable fifth placing in the Group 1 Manawatu Sires’ Produce Stakes (1400m).

Co-bred and raced by Maroal Bloodstock Ltd’s Ron Saunders, Lady Maroal is by Power out of the Group 2 Matamata Breeders’ Stakes (1200m) winner Lady Dehere, who is also the dam of fellow stakes winners Oracy and The Lady.

“It’s an amazing result for the owner, who’s 94 years old and he was on course today,” Tiley said.

“He also bred this filly, and bred her mother as well, so it’s just a great result for him. He’s an absolute legend, that guy.

“It was a very, very brave effort from the filly, who just got a little bit lost once she hit the front in the straight. The other horse really gave her a run for her money, but it was good to see her keep lifting and get the win.

“She doesn’t need to do any more this season, so she’ll head out for a break now and won’t come back until the spring.”