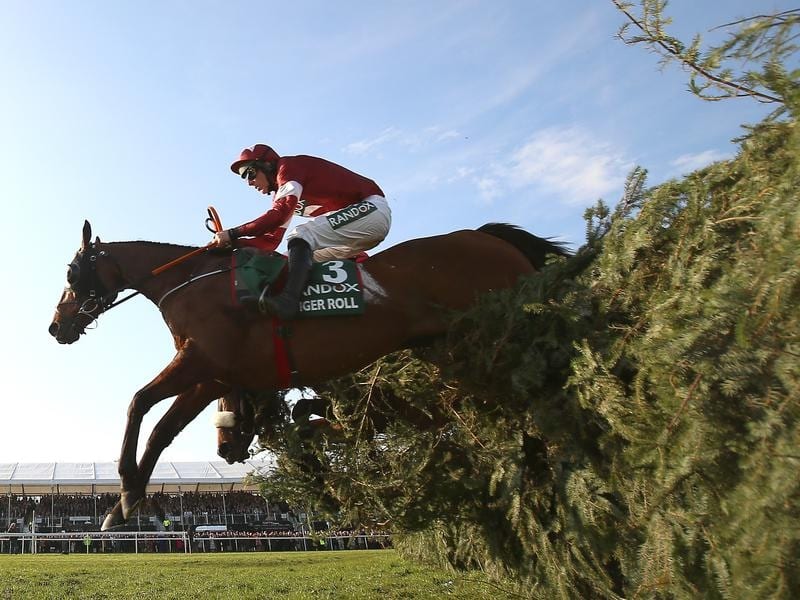 There could soon be a new statue on display at Michael O’Leary’s home after Tiger Roll became the first horse since Red Rum to win back-to-back runnings of the Grand National Steeplechase at Aintree.

With his two Cheltenham Gold Cup winners War Of Attrition and Don Cossack having sculptures built in their honour, Ryanair boss O’Leary, who owns Tiger Roll under his Gigginstown House Stud banner, may need room to immortalise the nine-year-old following his heroics on Saturday (Sunday AEST).

After claiming a fourth Cheltenham Festival victory last month, the diminutive Gordon Elliott-trained gelding wrote his name into the history books when he achieved what many before him have tried and ultimately failed.

A bad stumble at the fourth-last fence failed to stop the momentum of the 4-1 favourite, who passed the post 2-3/4 lengths clear of Magic Of Light to emulate Red Rum’s back-to-back wins in 1973 and 1974.

“When Silver Birch won (in 2007) I probably didn’t appreciate it enough,” Elliott said.

“Tiger Roll last year was unbelievable. Tiger is just a bit special, but the stats were against him.

“Hopefully he will get the recognition he deserves and will go down as one of the greats.

“Michael has got two statues in his house of War Of Attrition and Don Cossack, and hopefully he will get one.

“When you talk about legends, Tiger Roll has won at four Cheltenham Festivals and two Grand Nationals and that is a legend to me.”

Celebrating big-race glory is common practice for both Elliott and O’Leary, but for the latter it was a victory he will not be forgetting any time soon.

“This is one of the greatest days of my life.,” O’Leary said.

“Frankly I felt no pressure at all, as I didn’t give him any chance having gone up in the weights. I was much more worried today that he would just come back safely.

“I think he stumbled twice there and that kind of woke him up, but there was never a moment’s worry.

“He is already a legend. He has now won it twice and has achieved more than any other horse since Red Rum in 1974.”

O’Leary said Tiger Roll was unlikely to try to win the race for a third time.

After landing the race for the first time aboard Tiger Roll last year, winning rider Davy Russell expressed his delight at being able to enjoy taking his position centre stage once again.

“This horse and this place is amazing. People go on about certain sporting events, but Liverpool and Aintree are so far ahead,” he said.