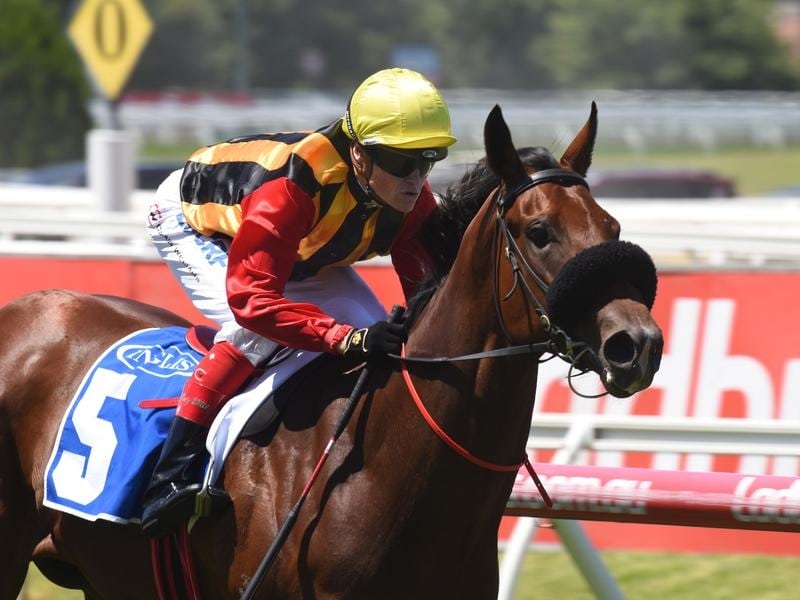 Kinky Boom made an instant impression with a stylish win on debut at Caulfield in early February in the $250,000 Inglis Premier before finishing 11th in the Group One Blue Diamond Stakes (1200m) at her second start.

The filly will return in Wednesday’s Le Pine Funerals Handicap (1000m) for two-year-olds.

“She seems well and ready to go back to the races so I thought I’d run her,” trainer Tony McEvoy said.

“She’s grown a bit and she’s still got the same sort of ability that she had last time which is good.”

Kinky Boom headed the Blue Diamond stakes market for a period in the lead-up to the $1.5 million race for juveniles before starting $9 in the race won by Written By.

McEvoy is forgiving of Kinky Boom’s effort on the big stage so early in her career.

“She’s pretty good but she got it all wrong in the Blue Diamond,” he said.

“But it’s pretty hard going to a Blue Diamond in your second start. Not only did I think she was OK, the market made her favourite so we ran her and sadly she just wasn’t up to taking that step at that time. But it’s not to say she’s not a Group One filly.”

McEvoy said the plan was to head towards the Group One Thousand Guineas (1600m) for three-year-old fillies at Caulfield in October with Kinky Boom.

Luke Currie is booked to ride Kinky Boom on Wednesday, with the jockey returning from a winter break having not ridden in a race since mid-June.

Currie is booked for five rides at Sandown, with three of those – Kinky Boom, Illumicon and Rockarral – for McEvoy.

“Luke has been back riding work for a week and he’s fresh and well,” the trainer said.

Lightly raced Illumicon will resume in the Ladbrokes Multiverse Handicap (1000m) and has been gelded since his last start when last in the Group Two Autumn Stakes in February.