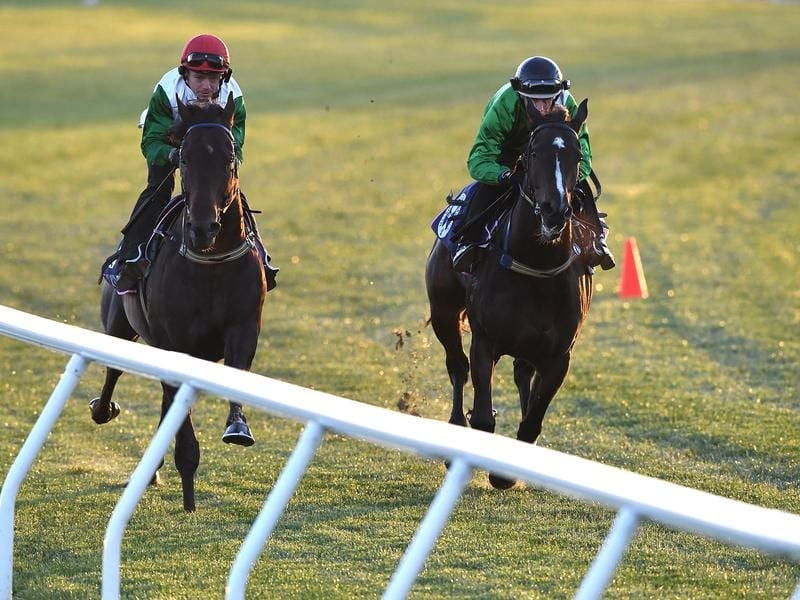 Thinkin’ Big remains a clear-cut Victoria Derby favourite after the barrier draw as the colt bids to deliver Gai Waterhouse a second win in the Flemington Classic.

A capacity field is set to line up in Saturday’s $2 million Victoria Derby (2500m) for three-year-olds with Thinkin’ Big drawing barrier nine in the field of 16 plus two emergencies.

He will jump from gate seven if the emergencies, Alessandro (barrier one) and Vow and Declare (eight) do not gain a start.

Thinkin’ Big is also a chance to run in the Melbourne Cup three days later, with Waterhouse signalling her intention to accept for the Cup if the colt wins on Saturday and pulls up well.

“If he pulls up well and he’s happy and healthy, he’ll back up,” Waterhouse said at Flemington on Tuesday morning.

Waterhouse said lightweight jockey Michael Dee “has been put tentatively on hold” for the Cup ride.

Thinkin’ Big could give Waterhouse, who now trains in partnership with Adrian Bott, her first Victoria Derby since Nothin’ Leica Dane in 1995 and the colt was at $2.90 after Tuesday’s draw with Godolphin’s Aramayo next at $7 after drawing one gate outside the favourite.

Thinkin’ Big was an all-the-way winner of the Caulfield Classic (2000m) last start and continued his Derby preparations with a comfortable gallop in company with Empire Rose Stakes-bound stablemate Shumookh on the Flemington course proper on Tuesday.

They clocked their final 400m in 25.13 seconds and Waterhouse described it as lovely, relaxed work.

“We’ve been happy with him all along. He’s just ticked every box.

“He’s a class horse going into a class race and he won’t disappoint the punters.”

Caulfield Classic runner-up Chapada strode clear of his work partner Pedro Ximenez in his gallop on Tuesday with his Derby jockey James McDonald aboard.

Trainer Robbie Laing won the Derby with Polanski in 2013 and has Stars Of Carrum chasing The Vase-Derby double.

Both McEvoys are yet to win a Victoria Derby.