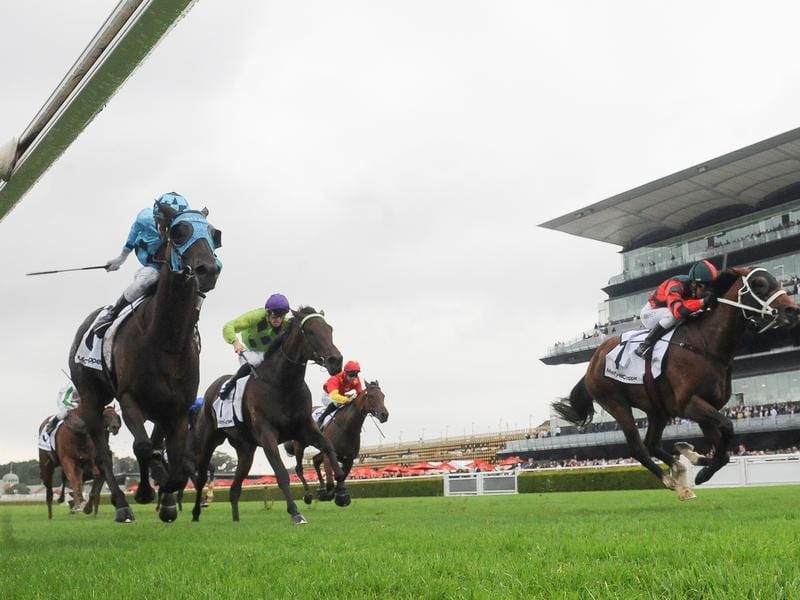 In a Winx-like performance, the champion’s stablemate The Autumn Sun has come from a seemingly impossible position to win the Group One Randwick Guineas and confirm he is Australia’s best three-year-old.

The $1.80 favourite was near the tail of the field early when Miss Fabulass ($21) set off and led by as much as 15 lengths midway through Saturday’s 1600m-race.

Fundamentalist ($15) gave chase and as Miss Fabulass capitulated, the filly took up the challenge and looked to have a winning break halfway down the straight.

But as The Autumn Sun was stoked up by Kerrin McEvoy, his strides got longer and he muscled his way to the line a long head in front of Fundamentalist who is now a five-time Group One runner-up.

“If I didn’t train Winx I wouldn’t have believed that performance,” Waller said.

“She has probably desensitised the emotion of these big race wins.

“That was a glimpse of what she can do and I won’t say any more about her.

“Full credit to this horse. He’s Australia’s next star and I can only tell you how good he is. You’re seeing it but he is a very, very good horse.”

Just how good or how long The Autumn Sun will be a star is yet to be determined with John Messara of Arrowfield Stud hinting he may be serving mares by the spring.

Messara would not be drawn into any plans on race day whether the colt would take on Winx in either the George Ryder or Queen Elizabeth Stakes or head to Royal Ascot.

“We don’t make these decisions on race day,” he said.

“It was important to get today over first.”

Arrowfield bred The Autumn Sun and bought back into the colt shortly before he won the Caulfield Guineas in October.

“The exciting part about this horse is he’s not mature yet,” Waller said.

“That is the next question you have to ask ‘do you want an immature horse taking on the world or be around for a bit longer?’ It’s a great thing to be thinking about.”

McEvoy said The Autumn Sun deserved all his accolades.

“He needed to be outstanding today and he was. He was brilliant,” he said.

“I knew he was going to finish strongly and that’s exactly what he did. He ate up the big spacious Randwick straight and really flew the last bit.

“I was worried I was too far back. They were putting the race on solidly from the half mile. He was in a nice rhythm but at the 600 metres I thought ‘far out I’m a long way off them.’

“At the 400 I asked him for a supreme effort and that’s exactly what he gave me.”