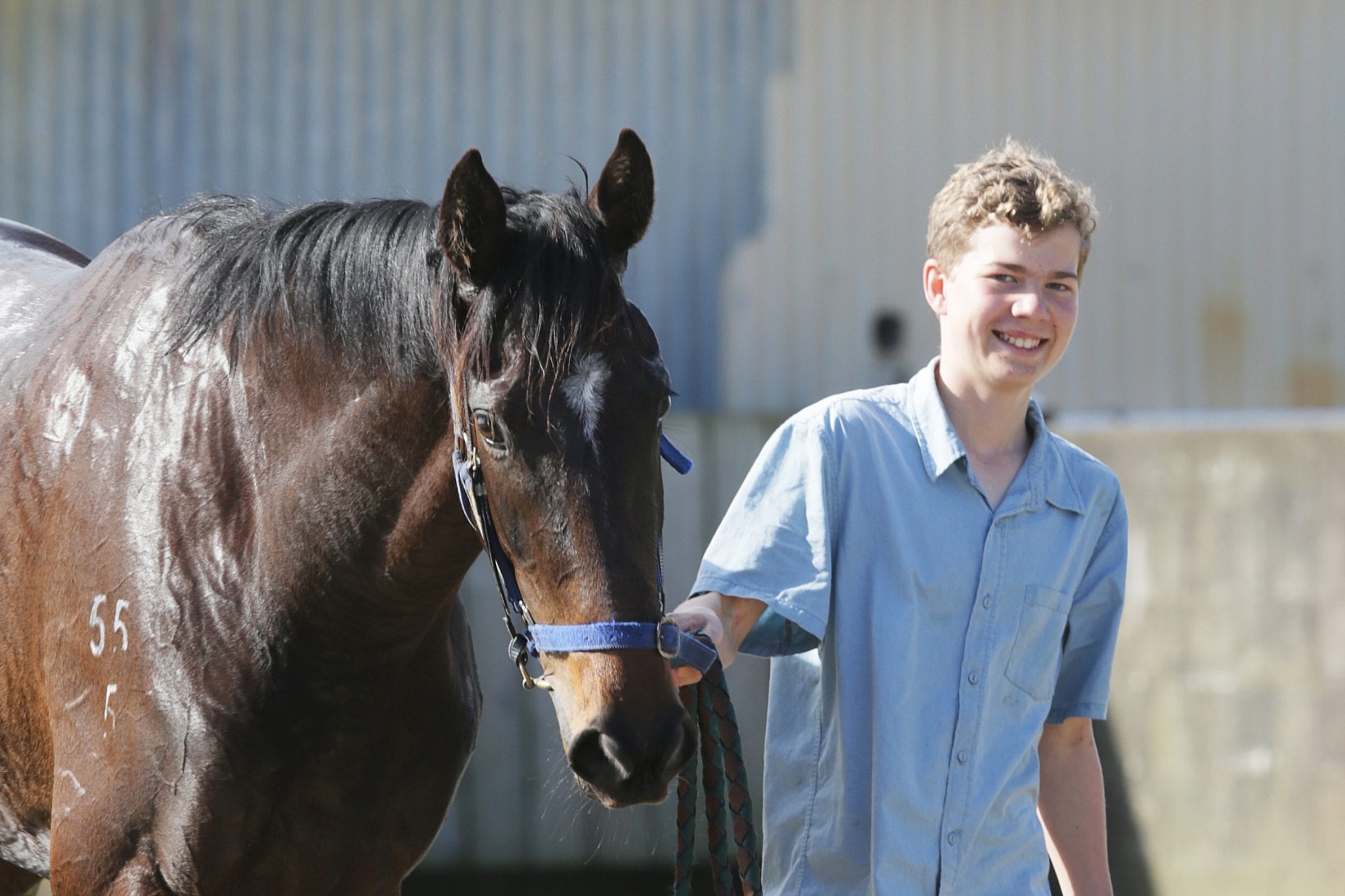 As Verry Elleegant prepares to fly the New Zealand flag in Tuesday’s Group 1 Lexus Melbourne Cup (3200m), the star mare’s Kiwi co-owners are on the ride of their lives. Among the owners, albeit now unofficially, is 16-year-old Connor Harrison, a stablehand smitten with the daughter of Zed from the moment she entered the Ardmore Lodge stable of Nick Bishara.

Bred and part-owned by Aucklander Don Goodwin, Verry Elleegant won two of her first three starts for Bishara, before a majority interest was later sold across the Tasman, but the original Kiwi shareholders retain a 25 percent interest in the mare, including a small unofficial share for Harrison.

Despite not coming from a racing background, Harrison has been bitten by the racing bug, with a love for the horse and the people. “We lived in the house in front of the stables and one day I just came down for a look. I started out mucking-out boxes for Nick,” Harrison said. “My mother is a pre-school teacher, my dad’s a builder and my step-dad works for Air New Zealand, so there was nothing there to do with horses, but I love them. “Nick treats me like a son. It is cool to have him in my life. He is like a third father to me.”

The pairing of Verry Elleegant and Harrison worked from the outset, leading to an unlikely path to racehorse ownership for the teen, who is regularly seen strapping horses at the races for Bishara. “Her personality was the thing that caught me. She wasn’t the easiest but her and I got along really well and I just loved the way she was light on her feet and carried her body,” Harrison said.

“Right from the start, I thought she was just amazing. “I really wanted to buy a share in her, but mum said ‘no, we don’t buy racehorses in this family, it’s a waste of money.’ “I went behind mum’s back and told Don Goodwin what she had said. He gifted me a five percent share. I had to pay him back in prize-money, which turned out to be pretty easy at the end of the day.”

Harrison’s first taste of racehorse ownership has so far produced 11 victories, including six at Group One level, and around $7 million in stakes. As a last-start winner of the Group 1 Caulfield Cup (2400m), the five-year-old mare heads to Flemington in high-flying form in the countdown to Tuesday’s A$7.75 million Melbourne Cup.

“I would never have imagined that my very first horse could win the Caulfield Cup and be a six-time Group 1 winner,” Harrison said. “It’s just been an unbelievable ride. “They’re a bit stricter about minimum age for owners over in Australia, so it’s not an official thing any more, but Don has made sure that I’m still involved. It’s been a life-changing ride. I’ll probably never have the chance to be involved with another horse like her.”

Harrison has left school but is studying online, which he balances with working with the horses at the stable. “I am studying equine and business because I want to follow through and be a horse trainer,” he said. “I can’t wait until Melbourne Cup day. It’s really exciting and just to have a runner in the race is a big thrill. The Kiwi ownership group are all going to be at Ellerslie together, along with some family and friends. It’s going to be a special day.”

Harrison also has bragging rights amongst his friends and admits a few of them might have some bolstered pocket money should Verry Elleegant salute on Tuesday. “Lots of them didn’t believe I have got a share in Verry Elleegant. They are quite surprised,” Harrison said. “I got Mum to have a sneaky bet on her to win the Caulfield Cup-Melbourne Cup double, so that would be a nice little bonus.”

Octogenarian Goodwin was pleased to be able to reward the youngster’s enthusiasm, and the outcome has far surpassed anyone’s wildest dreams. “Connor had a lot to do with Verry Elleegant from the moment she first arrived at Nick’s stable, and he was involved with her all the way through those early stages,” he said.

“He’s a good young guy who’s really keen on horses. He was out of luck when he wanted to buy a share in her and there was none of her left available, but I’d kept a 50% share myself and I decided to offer him 5% from that. If she happened to win anything, we agreed that we could take the cost of the share out of those winnings. “In the end, it’s fair to say things have gone a bit better than any of us could have ever imagined.”

Goodwin is a regular visitor to Melbourne for the spring carnival, and it is a cruel blow that he is unable to cross the Tasman this year for his homebred heroine’s shot at history. But being at New Zealand’s premier racecourse Ellerslie with his fellow New Zealand owners is the next best thing.

“There’ll be a fair group of us there, and it’ll be nice for us all to be together at a racetrack on Cup Day – even if that track isn’t Flemington,” he said. “This is the first time in about four years that I haven’t been in Melbourne at this time of year, and of course it happens to be the year I’ve got a horse in the Melbourne Cup! But that’s just the way it is.

“I’m feeling reasonably good about her chances. Nobody is going into the race with better form than her, and I’ve always said that she’ll stay two miles on her ear. “But we will need some luck. With 24 runners over two miles, including some of the best horses in the world, luck always plays a big part in winning the Melbourne Cup.

“We feel like we’ve got a lot of New Zealand behind us, which is a nice feeling. It’s been a while since anyone has done the Caulfield Cup-Melbourne Cup double. It used to be quite common when I was growing up, with horses like Even Stevens and Galilee, but it’s a rare achievement these days. It would be wonderful to see her do it.

“But whatever happens, we’re having a pretty good ride. We’ve got a Caulfield Cup in our back pocket, which is something you can’t really complain about and we will just enjoy the moment with all of the owners, including Nick and Connor.”