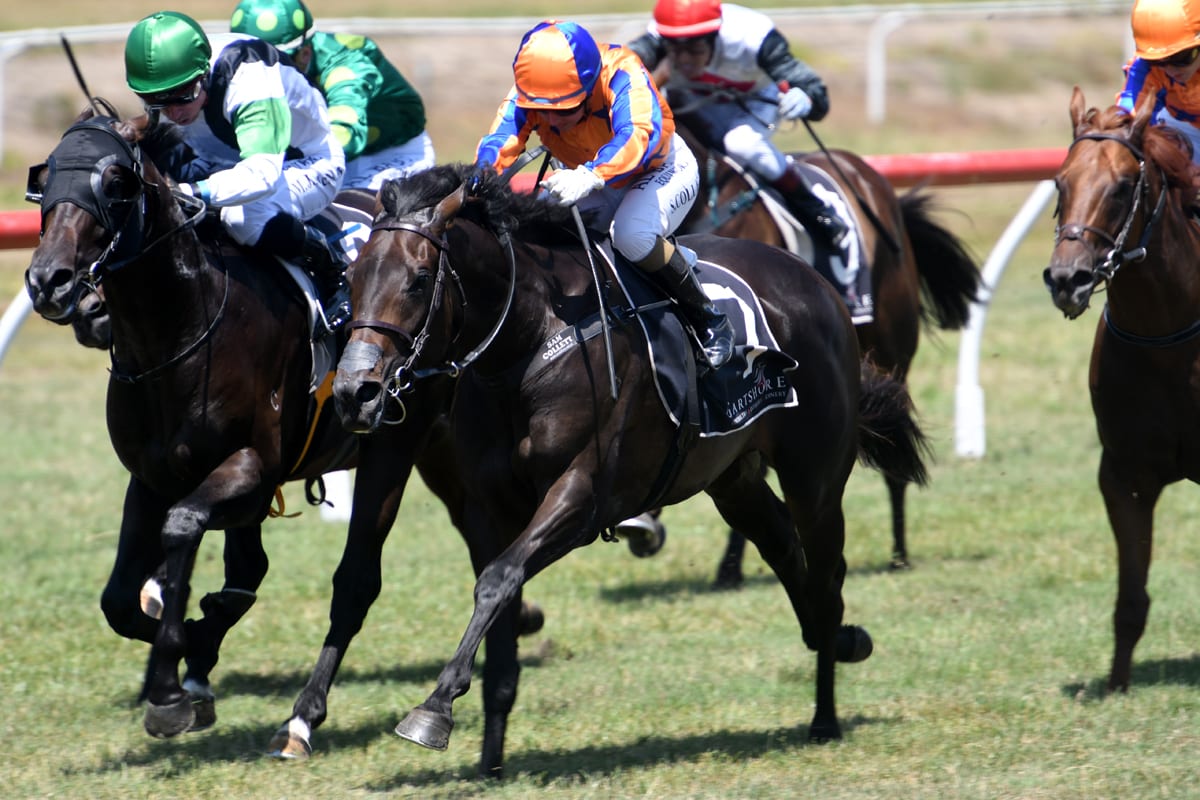 Te Akau have bolstered their numbers for the $1M Doubletree By Hilton Karaka Million 2YO (1200m) next week with a good result at Tauranga on Friday. Trainer Jamie Richards contested the Ray White Papamoa 2YO (1200m) with Millefiori and Sneaky Shark, and both have earned enough money to make it into the 14-horse field for next Saturday’s rich race.

Millefiori was given a perfect trip by jockey Samantha Collet in the trail behind La Grande Rue before she was guided three-wide in the home straight and rallied late to win by a long neck over Mr Blue Sky, with a further half-length back to Drum Major in third, and Sneaky Shark running on late to finish fifth.

With her $13,050 winning purse on Friday, Millefiori has jumped up to seventh position in the order of entry for the Karaka Million, while Sneaky Shark took his earnings to $5,450, bumping him up to 12th position.

While currently qualified for the rich race, Sneaky Shark’s connections will have a nervous wait for the Listed IRT No.1 Wellesley Stakes (1000m) tomorrow to see if they retain their qualifying position.

It was the second win for Millefiori from as many starts and Richards was pleased with the win after battling through a few issues with the promising filly. “It was a nice win,” he said. “It’s well documented that we have had a bit of trouble with her. She just had a temperature last time in before she ran. We had her on a bit of treatment and thankfully she has come right.

“We have just had to wait and be patient to get her right. The team at home at the main stable, Tracy Collis and Trevor Stewart, have done a good job and she looks like she is back on track.”

Richards is confident of a bold showing from the filly next weekend if she comes through Friday’s run well. “As long as she is able to bounce through that run and doesn’t have any ill-effects, we are really looking forward to eight days’ time,” he said.

Richards was also happy enough with Sneaky Shark’s run. “Sneaky Shark I thought ran okay,” he said. “I have just had a bit of trouble with him this week and we will have him better for next week. I think he will improve with the run. We will go into the race slightly under the radar.”

Te Akau have a strong record in the Karaka Million 2YO, having won the last four editions of the race, and they are looking to extend that this year with five current qualifiers for the rich feature. “It is a race that we obviously target and these horses have all come from different routes,” Richards said.

“Avonallo has been in the South Island. On The Bubbles has come a different way. Sneaky Shark has been up here and Sophisticardo has come through Ellerslie as well. “They have all had different preps, but I am really looking forward to next week and trying to get them really humming for Karaka Million night.”

Richards has also been busy inspecting yearlings with Te Akau principal David Ellis ahead of the New Zealand Bloodstock National Yearling Sales which commence on January 24. “We have seen plenty of yearlings and Dave has seen the majority of the catalogue,” Richards said.

“He has got a few to tidy up at the sale grounds, but we are in good shape and we will be putting plenty of work into that next week as well.”