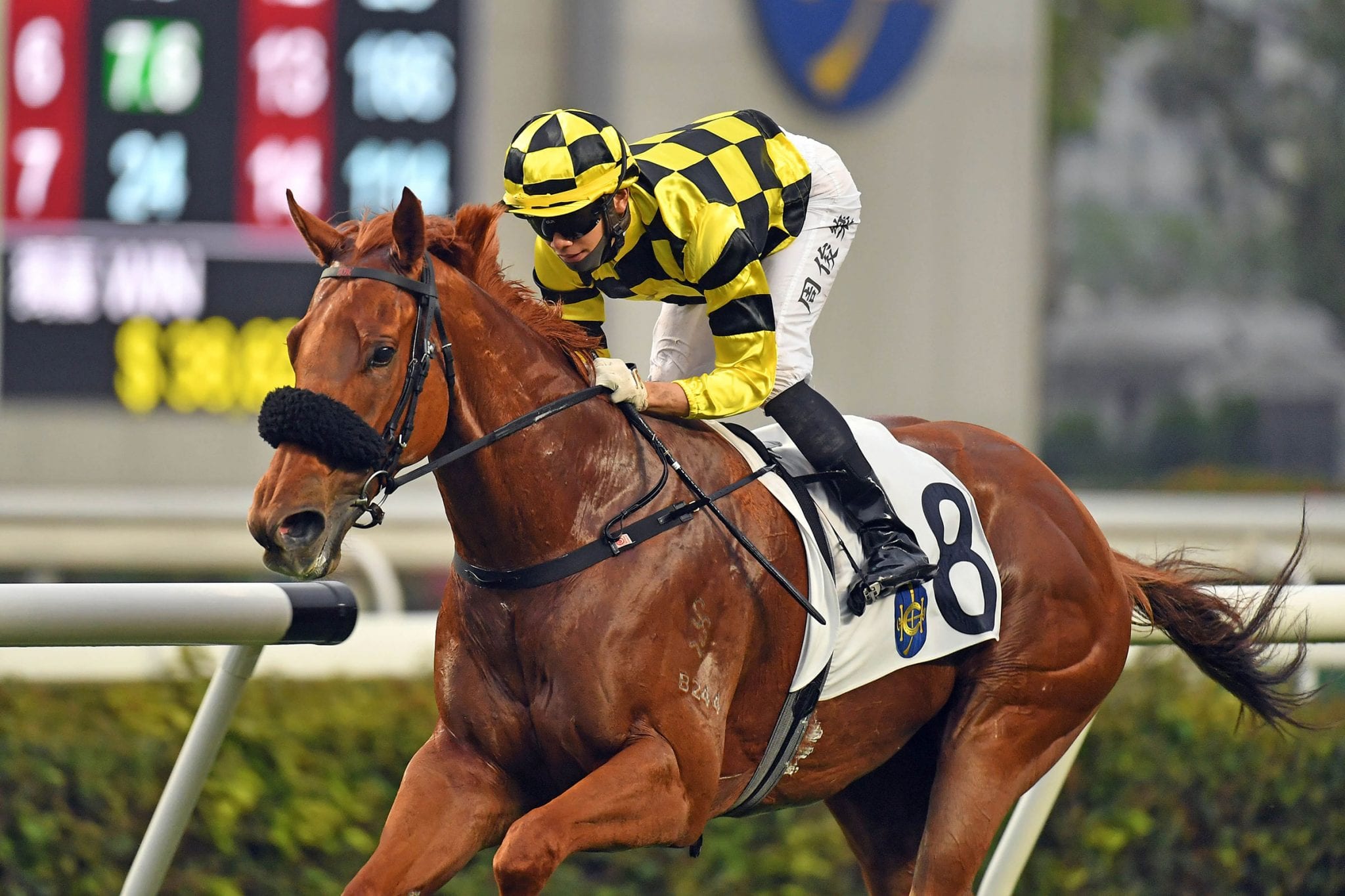 Winless for more than two years, Taking Aim completed a long, eventful trek from the brink of enforced retirement to Sha Tin’s winners’ stall after the Australian import trounced his rivals in the Class 3 Devon Handicap (1400m) on Saturday (17 April)

Placed only once in 17 starts since the end of the 2018/19 season, the Choisir gelding badly injured his nearside hock in a float mishap two years ago and, if not for the persistence of owner Edwin Cheung, the chestnut almost certainly would have been retired.

“He got badly injured in the float on the way up to Conghua and he had to have a major operation,” Trainer Douglas Whyte said after posting a double to share training honours with Benno Yung.

“He messed up his whole hock. It looked like he would have to be retired but the owner took the initiative and decided on the operation. Paul Robinson (Club veterinarian) has done an amazing job in get him back.”

The trauma was also part psychological, limiting Whyte to campaigning the six-year-old almost exclusively at Sha Tin because of a feared aversion to floats.

The former champion jockey has sent the sprinter only once to Happy Valley because of concerns over how the horse will react in a float.

“He goes into a float ok, but you don’t know what will happen after that. Even the one run, when I took him to Happy Valley (23 December, 2020), I had to get a special trailer for him to take him there because he’s obviously a bit pedantic about being in a float,” Whyte said after watching apprentice Jerry Chau cruise to a three-length win on the patched-up gelding.

“We’re fortunate we can still get him in the gates. We’ve done a lot of work with him. It looks like he’s got his confidence back.

“It’s a gamble when he’s in the float. Memory is a great thing. If something goes wrong, it could be worse than a hock.

“It’s taken me a lot of time to get the confidence to put him in a float and getting him going around and, by doing that, it might have got him over a couple of hurdles.”

Group 1-placed in the 2017 J. J. Atkins (1600m) behind Capital Gain, Taking Aim also ran second to champion Kiwi Melody Belle in the Group 2 BRC Sires’ Produce Stakes (1400m) in the same season for Peter and Paul Snowden before he was exported to Hong Kong.

“We know he can deliver and he showed me at home he could deliver that – he just needed things to go his way,” Whyte said. “He’s been running well over shorter distances. Today, he stepped up as a fit horse and he dominated.”

“When he came, he was tiny. He’s grown substantially but he still looks small. Besides a growth spurt, mentally he’s gone through changes,” Whyte said of the Outreach gelding, who travelled to Hong Kong as an unraced prospect in April.

“He’s come from the bush and hit Hong Kong city and gone ‘wow’ but he’s one of those who’s got incrementally better each time and it’s a lot to do with Conghua.

“He had a substantial amount of mucus (after his last start) and I’ve given him time to get over that up at Conghua and he’s come back in good health. He returned a better horse, mentally.

“It’s a big relief. More than anything, I think he’s appreciated a bit of time off.”

Yung clinched a double with Shanghai Dragon, who was given a brilliant front-running ride by Karis Teetan, notching his third win from four starts by claiming the Class 4 Somerset Handicap (1800m).

“The stable is going well, the horses are going good,” Yung said. “Hopefully there will be more winners.”

Antoine Hamelin notched his first winner since early March when John Size-trained Red Desert saluted in the programme’s feature – the Class 2 Alnwick Handicap (dirt, 1200m) – in the tightest finish of the day.

Red Desert, another of Oasis Dream’s progeny to excel on the Hong Kong dirt, fended off Sunny Boy by a short head with the same margin separating Kurpany in third place.

“He ran a lovely race, drawn midfield but the horse was very quick at the start so I could take up a nice position before the turn,” Hamelin, now the owner of 21 wins this season, said.

“The horse is a fighter. The distance, the surface – everything was good for him today – so he won. It was perfect.”

“We weren’t expecting to lead the race, but he jumped so well and Tony took advantage of the situation and he never looked like losing in the straight – great ride,” Gibson said.

“The horse has health problems and I’m sure the ground has been a big factor in the win today.

“It’s a fantastic achievement for the jockey.”

David Hayes revelled in his first victory on the dirt this year when So We Joy showed impressive versatility to prevail in the Class 3 Dorset Handicap (1650m) for Derek Leung.

“It’s good to have a dirt and turf horse, but he won like he had a class in hand,” Hayes said, after notching his 19th winner for the season.

“He’s a versatile horse. He’s my first dirt winner for the year – the stable is going well.

“He’s an older horse and I don’t have many of those, but I have a lot of younger horses. I think for the end of this season and for next season, the future looks bright.”

Lucky Ruby proved his liking of the 1200m dirt course with a second successive victory on the surface, this time in the Class 4 Essex Handicap (1200m) under Matthew Chadwick for Manfred Man.