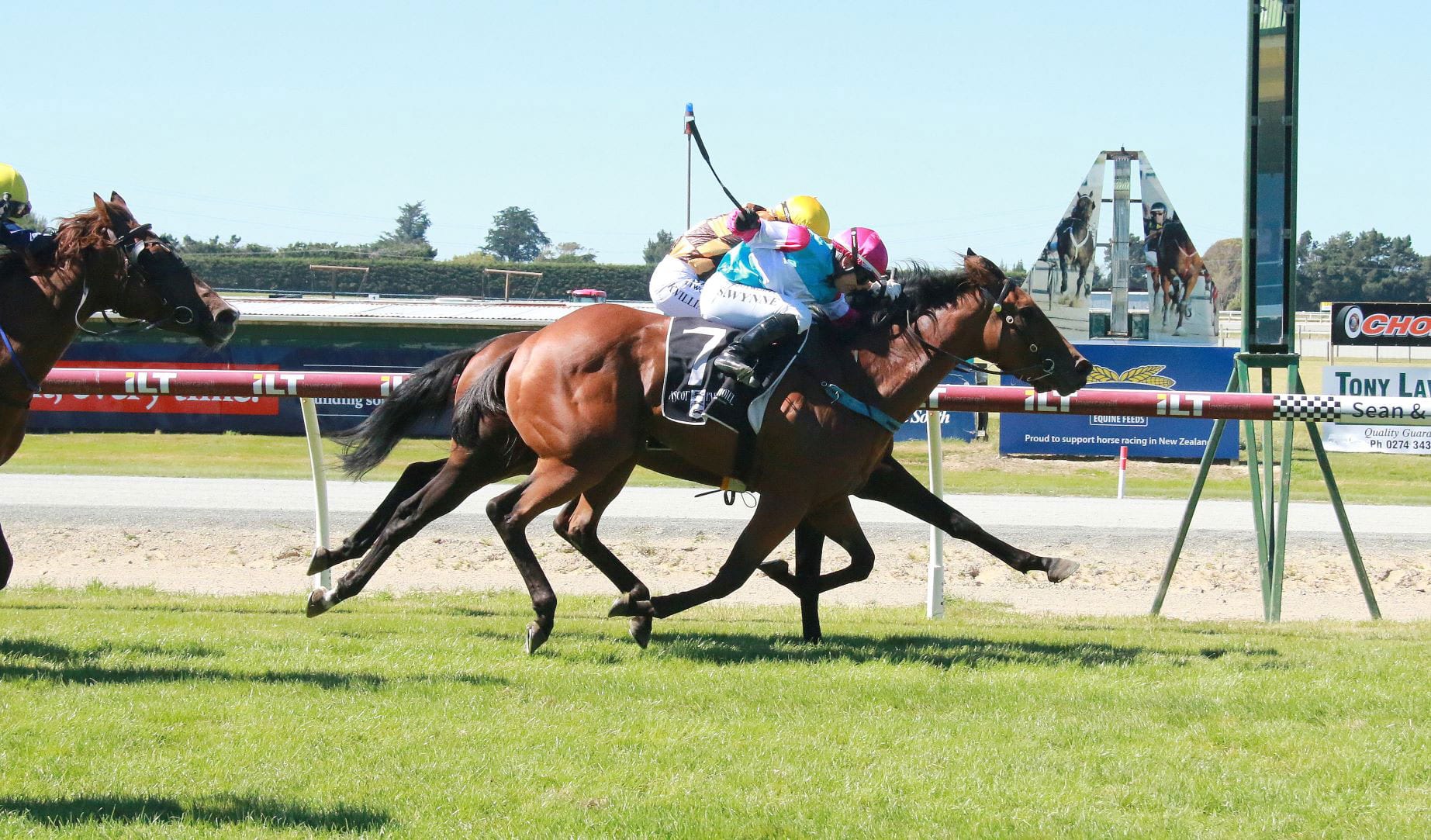 When Tracey Schroeder bought herself an ‘old plodder’ to ride and potter around with, she got a lot more than she bargained for.

She bought Pretty Woman as a re-educated thoroughbred to ride under saddle but has ended up with a valuable broodmare whose first foal is the Listed Southland Guineas (1600m) winner Chokito.

“One of my daughters had a thoroughbred eventer but other than that I had never had anything to do with thoroughbreds until I got this mare. Chokito winning makes owning the mare ever so special.”

Chokito has now won four races from 10 starts. She won three times at two, and this season she has been placed at each of her four starts, including a third placing in the Listed Gore Guineas (1335m). She is part-owned and trained by Warwick Coles who purchased her for $1700 as a foal in a two for one package on gavelhouse.co.nz.

A daughter of the former Champion Two-Year-Old Vespa, Chokito is the first stakes winner for the Elusive City stallion. She was bred by Fairdale and Goodwood Studs, from a family Fairdale Stud had had a lot of success with over the years. According to Goodwood Stud principal William Fell, he and his cousin Duncan, decided to sell Pretty Woman as she didn’t have the commercial appeal for Book One.

“Pretty Woman was originally a Fairdale Stud mare that we kept with Dad (Rex) and Gerald when the partnership split,” William Fell said.

“In 2018 Duncan and I had a conversation about her and although she had left a lovely Vespa foal, it was one mare and a family that we decided to offload, so she went on Gavelhouse.”

Her dam, Fairdale Lass, was unraced but was a half-sister to the stakes winners Marnies Magic and Rock You.

So back to the tale around Pretty Woman and how she became Schroeder’s prized broodmare and not her hack.

“I rode from five to 21 competitively and then both my daughters did as well. Once the girls left home and started their own families, my husband said to me ‘you have got all the gear in the shed, we’ve got the 10 acre block and nice roads to ride around, why don’t you get yourself an old plodder’, so I set about finding myself a nice big strong horse to ride and found Pretty Woman.

“After Warwick Coles bought her with Chokito at foot. Apparently, she was a lovely leggy filly a bit like her mum and then he decided he didn’t need the mare and sold her to be re-educated as a hack so she could be rehomed.

“I bought her sight unseen but had photos and videos of her, and when she got delivered a month after I had bought her, she was not in the best condition so I looked after her and treated her like a princess over the winter. I think I rode her once.

“Around late October she was looking pretty potty and ribby. The vet was around looking at one of my daughter’s horses and I asked him to have a quick look at her. He said it’s the time of the year, we’ll give her a good drench and have another look in a weeks’ time. That was on a Monday and by Tuesday night she had foaled a colt foal.

“In the meantime I had called the woman I had bought her from and asked if she could have been in foal, and she said she doubted it and put me onto Warwick Coles, and he told me when he bought her he had bought her as a two in one package.

“He contacted Goodwood Stud and William Fell told him she had been served by Alamosa but had tested negative.

“With this in-mind on the Tuesday night I said to my husband ‘I’ll just go and check on that mare again’, and when I got there, she was ready to foal down. And the next thing I know a stunning little colt was born. I had no idea about thoroughbreds or who Alamosa was and now I had this lovely colt. Oh and I had never foaled a mare either.

“With a few phone calls to Goodwood and Wellfield, I soon got all the paperwork sorted out, and I then sent her off to War Decree at Inglewood Stud, and Gus (Wigley, stud principal) has been a great help and given me lots of good advice.”

Pretty Woman foaled a filly foal by War Decree this season and Schroeder elected not to serve her, now she is thinking she will be booking her a date with Vespa again next season.

So, did Schroeder ever get that ‘old plodder’ to ride?

“I haven’t actually got around to buying myself another horse. The three I’ve got now are keeping me pretty busy,” she said