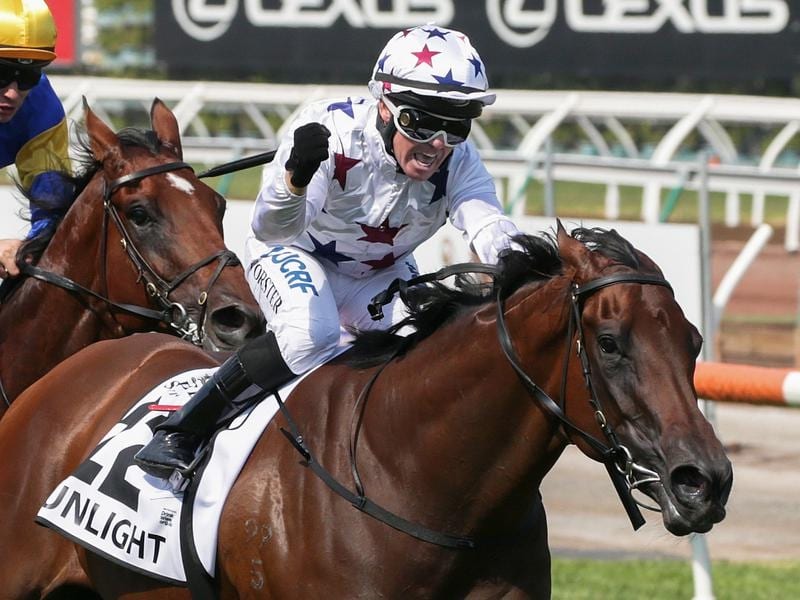 Star filly Sunlight has pleased her trainer Tony McEvoy in a gallop at The Valley ahead of the William Reid Stakes.

McEvoy took advantage of the opportunity to gallop the Newmarket Handicap winner at the course ahead of Friday night’s Group One sprint to get her re-acquainted with the circuit.

At her only start at the track Sunlight finished out of the placings in the Manikato Stakes in October, the only time she has failed to run a place in 14 starts which include nine wins.

Sunlight is one of 14 nominations for the race which include Bons Away, Dothraki, Fell Swoop, Malaguerra, Redzel, Shoals, Voodoo Lad and Written By.

Nominations have been extended until 10am on Tuesday with the final field declared a day later.

McEvoy instructed Luke Currie to give Sunlight a stronger work-out than he originally intended after looking at her on Sunday.

“I came into Melbourne yesterday and went to the stable and looked at her and she looked like she had been to the bakery again,” McEvoy said.

“She looked so full and well, you wouldn’t have known she’d had a contest last week.

“So we gave her a bit of work and Luke said she needed it. She had a good blow but then recovered very well.”

McEvoy doesn’t expect The Valley to hold any fears for Sunlight despite her performance in the Manikato Stakes.

On that occasion the filly missed the start slightly, was squeezed shortly after and was then unable to make benefit of her pace.

“She came here a couple of times before the Manikato and was effective but she had a horror night, as we all did,” McEvoy said.

“I wanted her to come back here, have a nice morning, and that’s what she’s done.”

Sydney’s autumn weather will determine whether Sunlight heads north after Friday night or is saved for the Adelaide carnival at Morphettville.

“The TJ Smith is worth a lot of money, it’s a weight-for-age sprint over 1200 metres which ticks all the boxes for her,” McEvoy said.

“We’ll go that way but that weather in Sydney in the autumn, if it was a heavy 10, I think that would be a reason for the ownership group to sit down with me and think what should we do.

“She’s a speed filly and they normally need quicker ground, plus we have Adelaide as a back-up.”