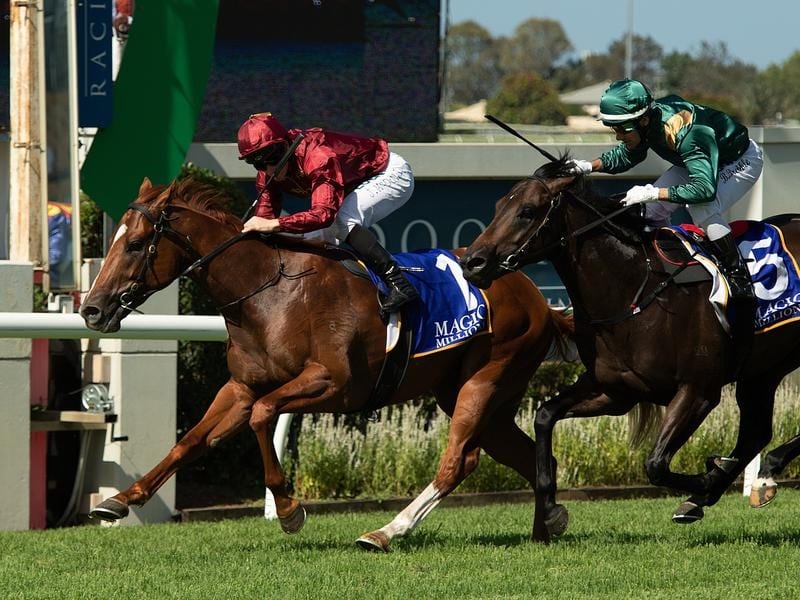 Trainer Tony McEvoy’s warning that Sun City was ready to beat his more fancied stablemate Just Zerene was proved correct when the colt won the $200,000 BJ McLachlan Stakes at Doomben.

Just Zerene was heavily backed in both the McLachlan and the Magic Millions 2YO Classic during the week and was put up at $1.80 on Saturday.

“I would ask you not to judge Just Zerene on that run. You can make mistakes like that at the start of maiden but not in this class,” he said.

“I will take her to Sydney now and redirect her to the Widden Stakes, Silver Slipper and then Golden Slipper.”

But McEvoy said it was all guns ahead to the Magic Millions Classic in a fortnight and he was confident of a win.

He won the race last year with Sunlight who like Sun City, a $525,000 yearling, is by boom sire Zoustar.

“Like all of the breed Sun City is an intelligent horse. Like Sunlight he got beaten first-up when he was unlucky and I knew he was improving all the time and with the Millions in mind it was an excellent run,” McEvoy said.

“We can just carry on with his program now to Millions day.”

Winning jockey James McDonald said Sun City had the run of the race behind the pace and he was able to get clear at the right time.

Both Rome and Krameric are on the borderline of getting a Magic Millions start.

Jockey Brett Prebble said it had been a very good run by Rome.

“I took plenty of ground off the winner and it was a strong effort,” he said.