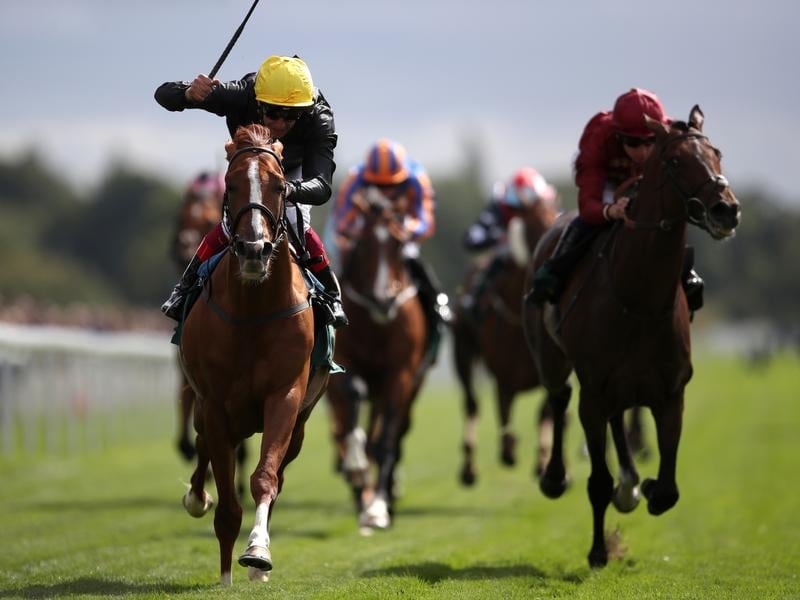 Stradivarius has scooped the inaugural Stayers’ Million ($A1.75m) bonus by completing a clean sweep of the series with victory in the Lonsdale Cup at York.

Winner of the Yorkshire Cup, Ascot Gold Cup and Goodwood Cup, the top-class stayer, owned by Bjorn Nielsen, landed the bonus for connections with a performance that was full of guts and determination.

It may not have been straightforward for the 4-11 favourite, but the John Gosden-trained four-year-old ultimately got the upper hand in the final furlong (200m) to beat his old rival Count Octave in the hands of Frankie Dettori.

Stradivarius took some time to find his feet, but he knuckled down to his task and once he hit the front he kept up the gallop to beat Count Octave by 1-1/2 lengths with the runner-up a possible Melbourne Cup contender.

“It’s an extraordinary achievement. The horse has a lot of determination, but also a lot of class,” Gosden said.

“I wouldn’t say he was at his sparkling best today, Rab (Havlin, on Petitioner) did a good job setting a pace and it was a good job he was there otherwise there wouldn’t have been much pace at all.

“I think he’s better off a really strong pace. But we can’t complain as we won.”

Gosden was non-committal on a start in the Prix de l’Arc de Triomphe.

“It looks very hot this year, so we’ll just have to see,” he said.

Nielsen said Stradivarius would not go to the Melbourne Cup but Anna Lisa Balding, wife of trainer Andrew Balding said they hoped the runner-up could be a runner.

“He ran a fantastic race and hopefully that might get his rating up a bit and get him to Australia (Melbourne Cup),” she said.

“Oisin (Murphy) has given him a lovely ride and the horse behaved so well today as well. Sometimes he’s a little bit on it.

“We’re absolutely delighted. We’ll get him home and make the trainer make the decisions, but that (Melbourne Cup) would be the plan.”