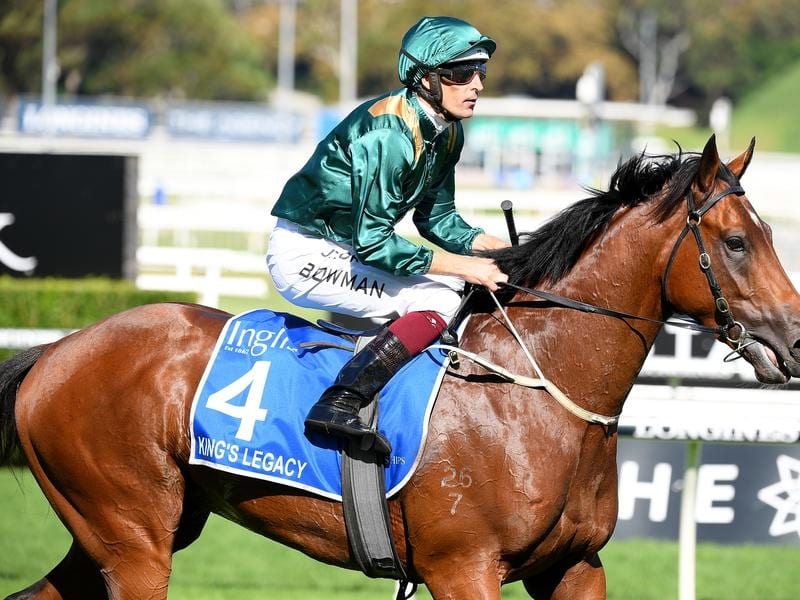 Trainer Peter Snowden is likely to follow a proven pattern with King’s Legacy in pursuit of more Group One success with the star colt.

Snowden is preparing to welcome the dual Group One winner back into stable life with the Group One Golden Rose to be the rising three-year-old’s first major objective in Sydney in late September.

And now with clarity over the Melbourne spring carnival race dates, the Group One Caulfield Guineas (1600m) shapes as the next port of call immediately after the Golden Rose (1400m) with a two-week gap between those important stallion-making races.

King’s Legacy is the only dual Group One-winning Australian two-year-old from this season’s crop, having taken out the ATC Sires’ Produce Stakes and Champagne Stakes during the Sydney autumn.

The ATC Sires’ win was over 1400m in his second start back from a break while the Champagne over 1600m was two weeks later.

Snowden, who trains in partnership with his son Paul, says the Golden Rose is likely to be King’s Legacy’s second spring start.

Along with his Sires’ win second-up from a let-up in autumn, King’s Legacy also won second-up in his first campaign.

“He comes back to the stable on Monday,” Snowden said.

“He’s had a couple of weeks of pre-training so he’s on track. All reports are he’s done pretty well.

“Certainly the Golden Rose will be a target race for him in Sydney. That will probably be second-up for him.”

Racing Victoria announced on Friday it had decided to stick with the traditional spring program rather than adopt a proposal to shift this year’s Caulfield Cup carnival from October until after the Melbourne Cup carnival in November.

It means the Caulfield Guineas remains on October 10, two weeks after the Golden Rose.

Even if the Caulfield Guineas had been pushed back, Snowden would have adapted with King’s Legacy’s program.

“That’s a race that’s a must,” Snowden said.

“It’s a three-year-old (Group One) mile for colts.”

King’s Legacy is one of three colts on the second line of an early Golden Rose market at $11 behind Golden Slipper winner Farnan at $6.

“We always thought he would get better as he got older and hopefully we’ll just see that natural improvement in him,” Snowden said.

“You don’t know until they come back but from what we’ve seen of him and how he is bred, you’d like to think he can train on again at three and possibly be a better horse again.”